KTM Australia’s Desert Racing Team today achieved its most glittering finish yet in the most important event on its calendar; the Tatts Finke Desert race.

Price’s was the first of three spectacular runs, as he, second-placed team mate Tye Simmonds, and David Walsh – who rounded out the podium – all slashed significant amounts off their fastest times down to Finke and back, reaffirming the team’s status as Kings of the Desert.

Walsh’s 3:52:11 would have won him the race last year, but the front men were all on a different plane this time around, Price literally so – flying the course twice as he successfully executed the Finke ‘Ironman’ feat of competing in both car and motorcycle divisions of the same event.

In typical fashion the man who won the Dakar Rally at only his second attempt in 2016 made it an outrageous success, winning the Trophy Trucks division and finishing as the second car overall.
‘The Finke’ was coloured a distinct shade of KTM Orange this year, with four of the top six finishers and ten of the top 20 KTM-mounted, while five of the eight motorcycle classes were won by KTM riders.

Former motocrosser Jack Simpson – who currently leads the AORC E1 category – added another off-road achievement to his tally when he won the Up To 250cc 4T class aboard his KTM250SX-F, landing in Alice Springs in a brilliant 11th Outright on debut.

Victorian Cody Ryan powered his KTM 250 SX to victory in the Up To 250cc Two Stroke class ahead of another KTM, that of Dalton Byrne, from Thargomindah, Qld.

KTM Australia’s own National Brand Manager Tam Paul showed he’s no suit-and-tie executive, winning the Veterans 45 Years And Over class on a KTM 450 EXC, ahead of KTM 350 EXC–mounted Jamie Harrison.

Toby Price – “It’s a bit of a surreal feeling to have tied the record out here for the most wins. I’m pumped, and just glad the whole program we put together went to plan, we podiumed in the truck and then won the bike leg. It’s been an amazing weekend. The poor old truck copped a beating this week, we flipped it on Friday when a part broke, but the boys fixed it and got it going again, and we’re pumped. A lot of people doubted what we were doing, so I’m just glad that we came away with good results.
I had a point to prove. I wanted to race the car, and there was a bit of a fire burning in my belly to get the job done on the bike. That was the best repayment that we could do for everybody that has jumped on board the truck project, and everybody that helped with the bike. I’m not scared of failure, I like to put myself out there on the edge, and set myself challenges. Sometimes it doesn’t happen, you can’t succeed all the time, but I didn’t want to let anybody down here, so I just held that thing on the stop all the way down to prove I was capable of doing the car and then doing faster times than I ever have on the bike.”

Tye Simmonds – “For me, I’m over the moon. It’s a massive improvement in my time and I’m really happy, but that’s all the time I’ve spent this year training and riding. I was a bit frustrated yesterday in my first 80 kilometres; I got really tight and made some mistakes, but that’s the only bit I was disappointed with. Toby was too good for me again but as a team we killed it. The track was so much more brutal this year, with the moisture making all the bumps a lot more square. It was quite tough, definitely rougher than last year.
Last year I kind of feel like I got second handed to me, but for sure I deserve this one – I worked my arse off for it. Walshy was a minute behind me out of Finke, which over 230 kilometres is bugger all, so I knew he was coming. At one point he was only 40 seconds behind, but we managed to claw it back and I think for the last 80 kays he cruised in to ensure the finish.”

David Walsh – “I had a bit of pressure from behind from the local lad Daymon Stokie, so I had to just really knuckle down in the first 80km. I think I made time out of Finke on both our boys, but then Tye was really fast and I dropped off, so once I realised I wasn’t within range I just really wanted to make sure I got home smooth to do the 1-2-3 for the team.
I loved being with KTM, the way the team runs than just support from everyone, all I have to do is ride the bike. I can’t thank the boys enough. Grabbo, Colin Ross, Tim Cole for helping me with my injuries. The boys are just great and it’s awesome to be a part of the team.”

Jack Simpson – “I nearly cracked the top-ten! I’m a little bit surprised, but then I did put a lot of effort into pre-running and training so all my preparation paid off. This race is just different, you can’t explain it, you’ve just get out here and do it, it’s that fast. You don’t even touch third gear, it’s just fourth and fifth the whole way. I had a real good run, I prologued 15th, and I played a bit of cat and mouse with a 450 on the way down, and then on the way back with Nathan Trigg who finished tenth outright. I’d catch ‘em, then they’d pull away, over and over. But that’s what happens on the little 250. But the bike went great, 460 kays of flat knacker on a dead stock KTM 250 SX-F. Hard work on a little engine, especially with me revving it, but it made it, no problem!”

Ben Grabham – “The boys going 1-2-3 is just amazing. It’s the biggest effort we’ve put it in up here by far, and it definitely paid off. Toby did the amazing as he always does with the truck and the bike and he rode a flawless race, he didn’t put a foot wrong and he kept the boys chasing all weekend. Toby felt that it was a benefit to get a look at the track in the morning, but it was still very impressive to watch it all unfold, including the simple logistics of it. For him to go six minutes faster than last year shows the level the boys at the front are pushing at these days.
Tye was a lot closer to Toby than he was last year. He rode a very strong second; and he should be very happy with his ride, the same with Walshy. We didn’t say too much before the race but Walshy had two very big crashes about two weeks ago. We were doing race simulations and he flipped the big girl doing 160-170 km/h. He did a good job of trying to destroy the bike and himself. He had a cut in the palm of his hand you could stick two 20-cent coins in, and his back looked like he had been dragged down the tar, so to bounce back from that and still challenge these boys and put it on the podium, it’s pretty impressive.
There’s so much team involvement for Finke. Obviously it starts at the headquarters in Perth and the race team at Emu Plains, but we probably have another 50 to 60 outside people and businesses and sponsors and key people that, without ‘em, we couldn’t even dream of doing what we do.” 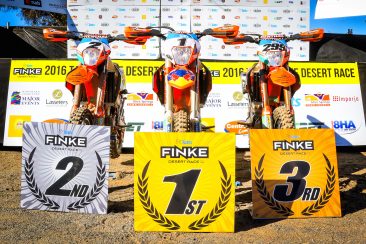 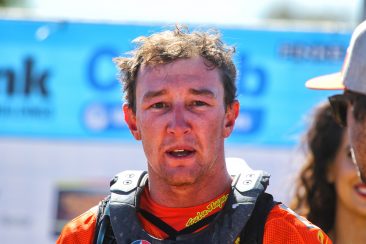 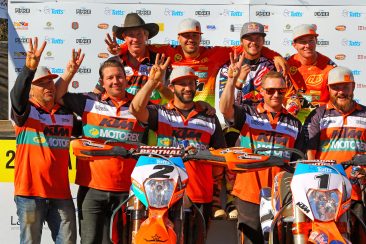 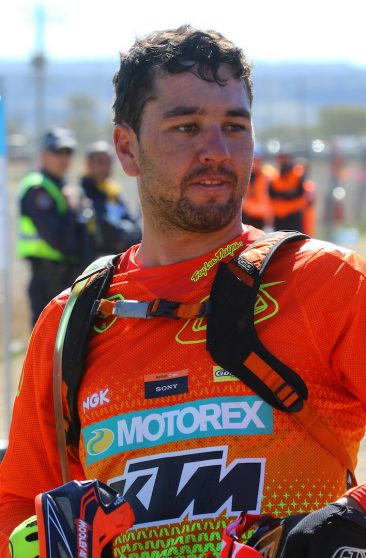 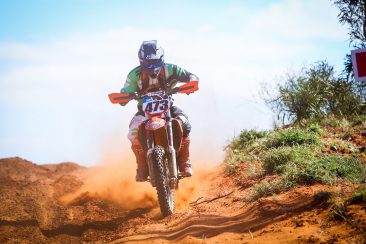 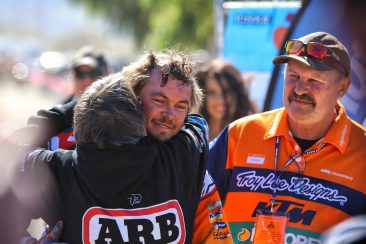 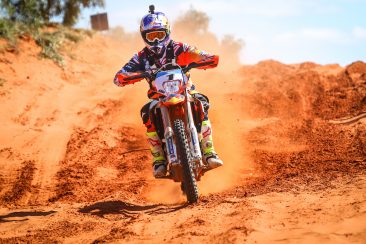 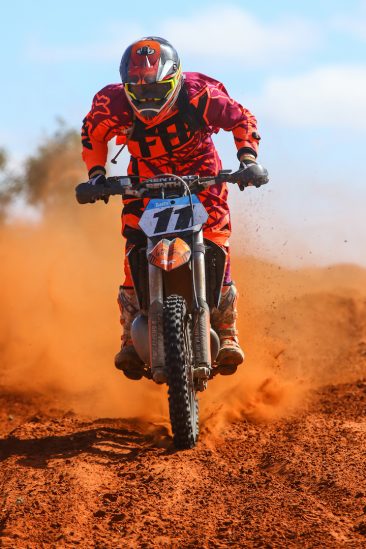 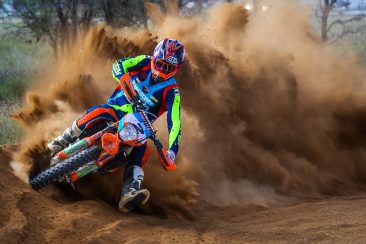 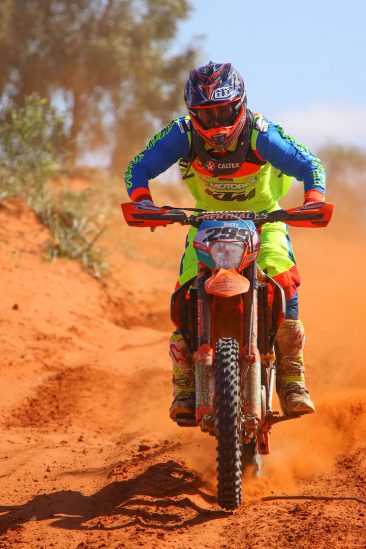