Gone are the days when girls only sat on the sidelines and watched the guys have all the fun.  Now, seeing a full grid of girls ready to race is a common sight and one that is helped by the likes of Laia Sanz mixing it with the boys at Dakar.

Girls these days are proving that it is more than just riding that they love: it’s racing that is in their blood they’re taking the sport they love to the next level, just like the boys.

This month we have a chat to one such powerhouse female racer; 22-year-old Western Australian Jess Moore is taking her motocross racing to the next level, mixing it with the boys and dreaming of the FIM Women’s World Motocross Championships.

Tell us a little bit about yourself . . . Your racing background, where you are from, where you have been the past few years with your racing . . .

I’m 22-years-old, from the small mining town of Kalgoorlie in Western Australia.

I have a strong passion for motorbikes as my family and I have grown up around bikes my entire life, with my parents owning a local KTM dealership (Ray Moore Motorcycles), my dad being an ex-Australian 4 Day Enduro winner and my younger sister being an Australian Women’s Quad Champion.

Since the Age of 7 I have been competitively racing motocross and have progressed over the years from racing at just the local club level to an International level representing my country.

Some of my major accomplishments over the years in my racing include 3 x WA Women’s State Championships, 5 x Australian Championship podium finishes and a 5 x time winner of the Southern Cross Queen of the Cross.

In this time I have also raced in a handful of World Motocross Championship races all over the world, including Qatar, Thailand, Germany, Czech Republic, and the Netherlands with my best overall finish being a 6th place finish in Valkenswaard, Netherlands 2013.

The last two years of my racing have seen a lot of emphasis put on trying to race in the World Championship scene, as I have had some good support from people over in the Netherlands helping me with bikes, travel and even places to live, as last year I was in Europe for 9 weeks to race and train for the season.

Unfortunately however the last two years I have also suffered from two very major injuries right at the start of the season, keeping me off the bike for large amounts of time and missing a lot of racing.  This has effected my overall results but along the way I have gained some very valuable knowledge and experiences.

In my spare time when I am not racing, I have currently just finished a university degree in Sport Science and Exercise Sciences and am looking into going on to my masters in the next few years. I also do a bit of coaching with the local kids and our young girl riders in WA to help promote women’s racing and to keep the girls in the sport. I like to stay fit and healthy off of the bike also, as I do a lot of running, swimming, cycling and mountain biking and just really enjoy being outside and around the sport. 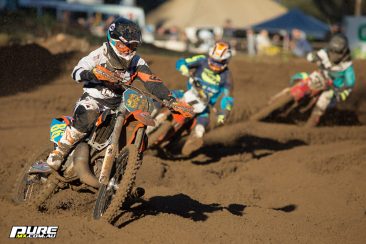 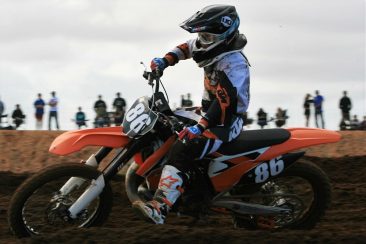 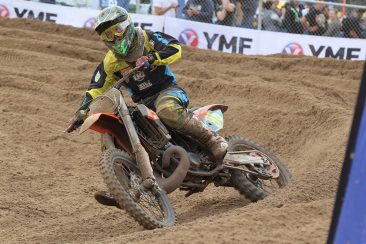 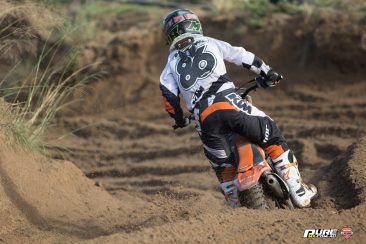 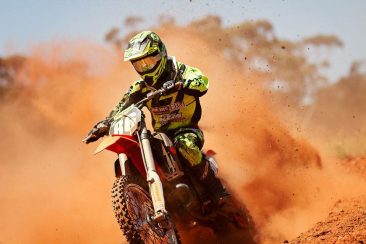 To me the best riding moments on the track have to be when you are having a really good battle with someone – good tight and close racing, coming down to the last laps with plenty of passes being made. Nothing beats that feeling of winning knowing that you had to work hard for it.

What is it that you love most about riding motocross?

I have a very strong passion for the sport I love; the adrenalin you get when the gate drops at the start of a race, and when you jump a big jump or rail a corner right.  I love the atmosphere on race days, and how the whole of the sport and industry is like a big family! You meet so many life friends along the way. I love how hard you have to work to be successful and the heart and determination this sport gives you.

Yes I ride the Ktm 250 SX, I love the 2-stroke!  Having grown up riding them as a kid through juniors I really like the two-stroke.  The 250 is extremely light, handles really well and has plenty of punch! Being from WA where we race in a lot of sand, the 250 SX is the perfect bike for those conditions.

What does the 2016 race season hold for you?

So far the 2016 season has started off very busy for me, with a win at the first round of the Go Girls Series in QLD.  Since then I have raced at the second round of the World Championships in the Netherlands, where I unfortunately didn’t have the best of weekends.  After proving I have solid top 10 pace in the first timed practice I then suffered a crash in qualifying which resulted in a concussion which unfortunately affected my riding for the remainder of the weekend.

Since returning home our season in WA has started, with the first round of the WA State Championship in Geraldton, where I won the overall for the women’s class, winning all 3 races convincingly.  I also managed to qualify 15th out of 78 in the MX2 class and finished 20th overall for the day.

I then raced the 4th and 5th rounds of the MX nationals at Murray Bridge, SA and at my home national round at Wanneroo in WA – where I finished 23rd overall in MX2 class against the boys, proving to be a very good day 🙂

The remainder of the 2016 season will see me compete in all of the WA state championship rounds in both the MX2 class and the Women’s championship as well as our major WA open events like King of the Cross.

The Australian women’s championship is to be held at round 10 of the MX Nationals at Coolum and I am really looking forward to that. At this stage I won’t return back to the racing scene in Europe this year as it is very expensive to be a part of and I will compete in a lot more races here in Australia instead. Hopefully this season we can achieve some more good results as I have some great support behind me this year with my sponsors of KTM Australia, Neil Dunne, Herb Watson Racing, LKI, Pirelli, Motul, Scott, M2R, Go Vita, Ray Moore Motorcycles and EBM insurance.

Thank you for your time Jess!

Be sure to keep an eye out at the track for this girl – as she is likely to turn more than a few heads with her dedication to racing and speed!