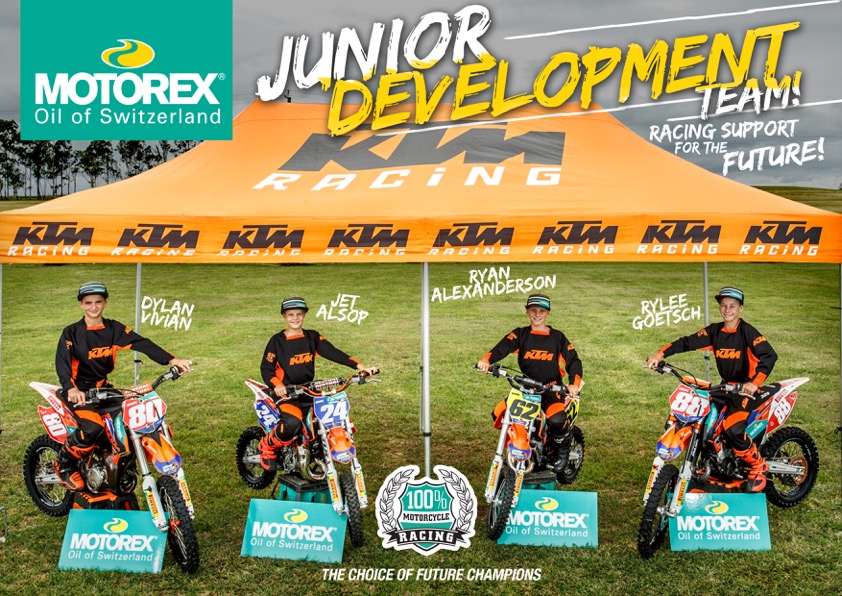 Big effort on small bikes: KTM has always been a proud supporter of the next generation of racers.

One such example of this is the new-for-2016 Motorex Junior Development Team, based in South East Queensland.  Team Manager Ben Alsop’s wife Renae tells us about the team and the exciting year ahead . . .

The team was formed through the collaboration of KTM Brand Sales Manager Ray Barnes and Motorex Australia’s Jason Rogers and Andrew Higgins, who saw a need to give more support to up and coming juniors in the sport.

As anyone involved in motocross or any motorsports will know, to have a successful career you need to put in a massive amount of time, effort and money to even have a chance at making it pro.

Too many talented juniors end up leaving the sport as their parents are simply unable to sustain the commitment. Every champion today once started off as a junior, so that’s where Motorex and KTM have teamed up and recognised the significant contribution that motocross families, privateers and clubs all make to Australian motocross at grass roots level, and are helping to keep junior bums on seats and groom the next generation of Australian motocross champions.

Four lucky boys were carefully selected, not only for their skills and talent on the track, but also for their potential to grow and develop in the sport, their good sportsmanship and their commitment to see it through.

Team Manager Ben Alsop says the support from Motorex and KTM is a huge boost to the young riders and their families.

“To have the support of two of the biggest names in motocross is a big honour and we are extremely grateful for the opportunity. They have provided us with all the essentials we need to race for the 2016 season and it really has been a massive help to all of us on the team. The support and guidance the boys are receiving within the team is fantastic, but not only that, it has given them all a real boost of confidence to be chosen for this opportunity, and just to really feel like they’re a part of something big. Motocross is such a fantastic family sport, the life skills and life-long friendships these kids gain are truly invaluable, so to keep kids and families going in the sport is really important.”

The team also has the support of KustomMX who designed the team logo, printed the sticker kits and jerseys, as well as tyre sponsor Pirelli. Along with the coolest Motorex race tents in the pits, these boys are really looking the part!

The combined knowledge and experience of the parents on the team together with a range of accredited coaches and industry professionals all work together to guide the boys in the right direction with their training and preparation, as well as their performance and conduct on race day.

And they couldn’t be happier with the outcome, the boys are all really stepping up and getting a taste of what it takes to be a pro motocross champion. Being a development team, the main focus is growing and developing the riders and encouraging longevity in the sport, and the results are already flowing. Not only that, the bonds they are forming amongst the kids is really great to see, and the most important thing is they’re having a tonne of fun along the way 🙂 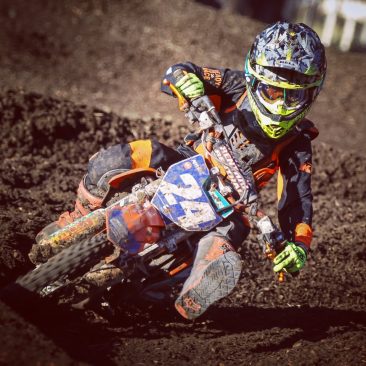 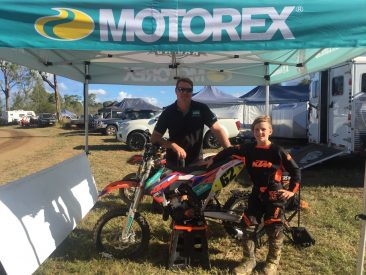 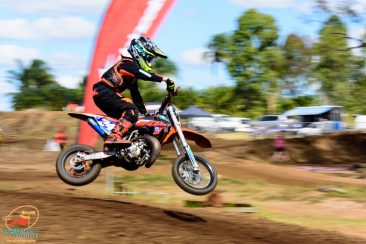 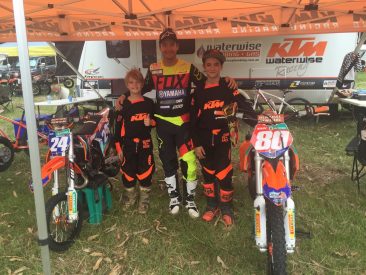 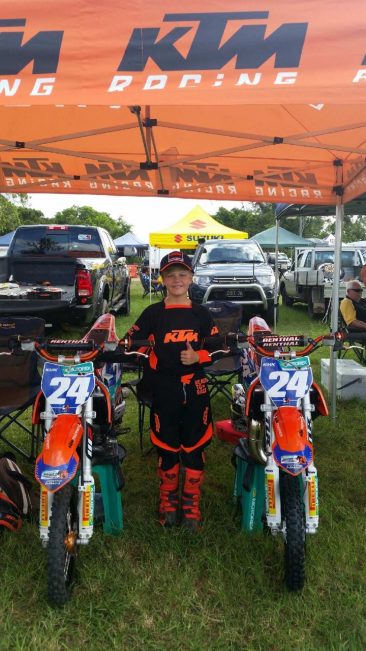 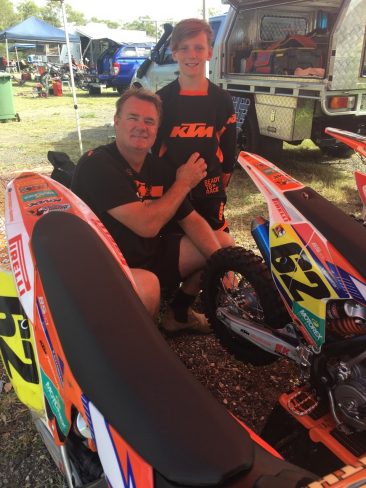 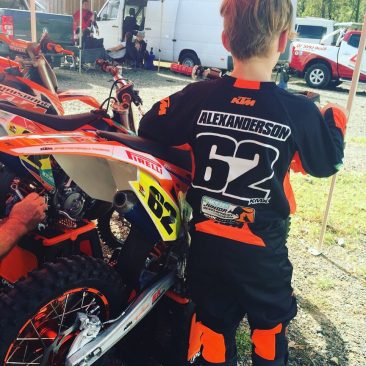 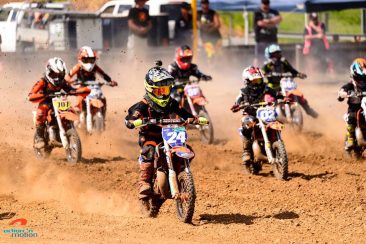 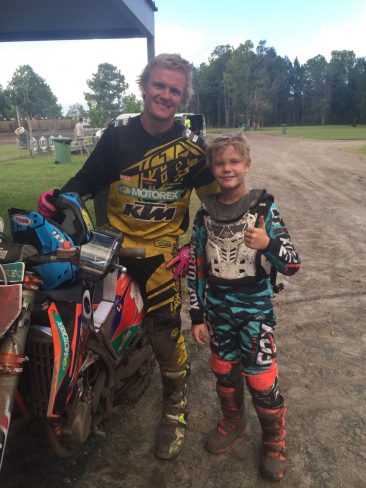 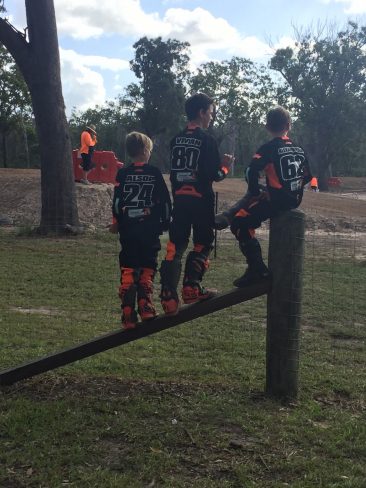 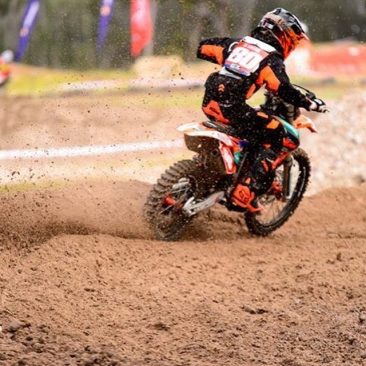 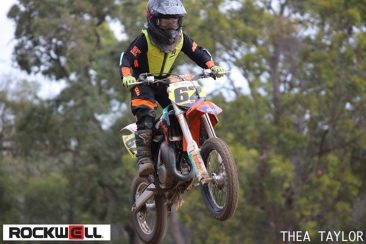 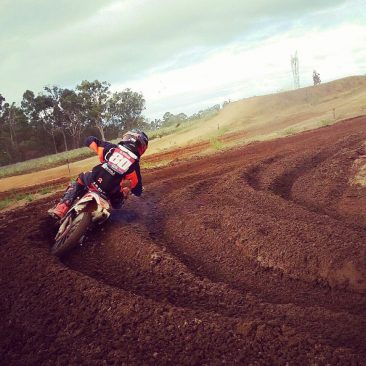 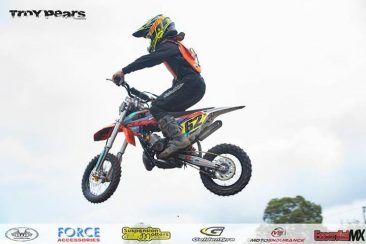 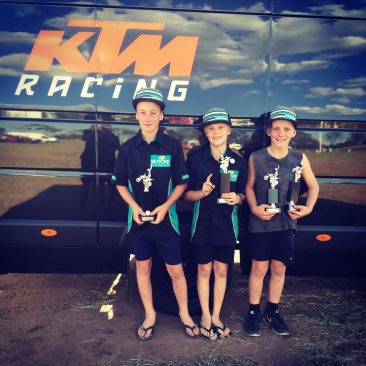 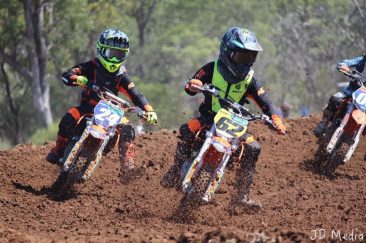 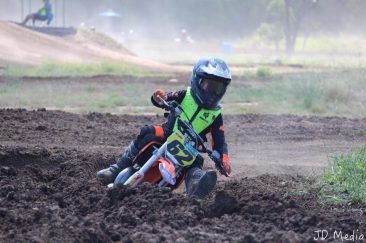 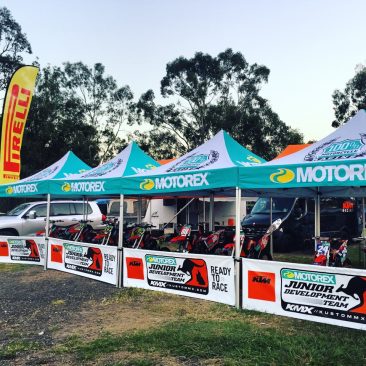 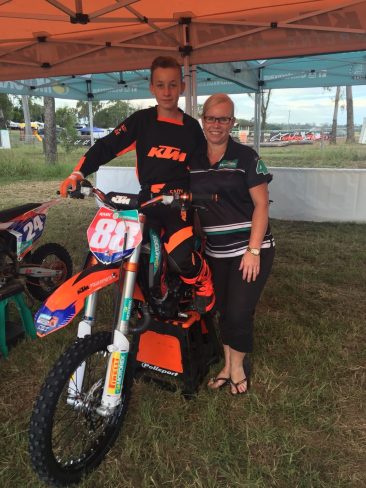 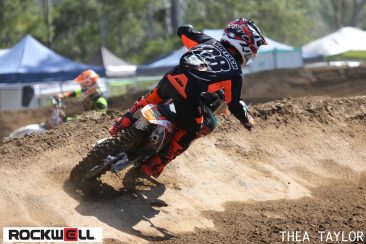 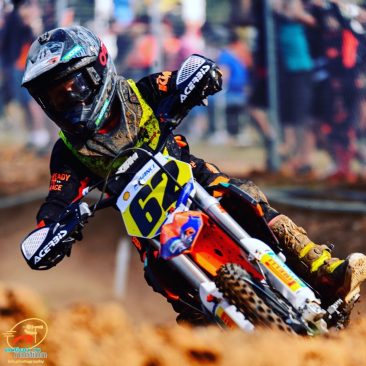 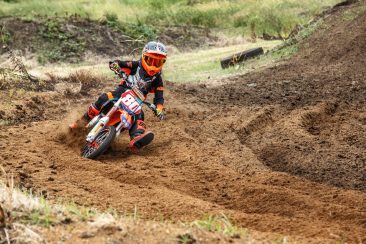 So without further ado, let’s find out a little more about these up and coming groms… 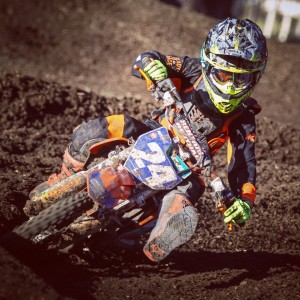 He may be the youngest member of the team, but Jet sure knows how to hold his own and lead the way with results. At the ripe old age of 9, he already has 5 years of racing experience under his belt. With motorcycle racing stamped firmly in his DNA, Jet was always destined to ride. He is now a 4th generation racer, his dad, uncles, grandfather, great uncles and great grandfather all raced motocross, so the love and passion for the sport was destined to flow through his veins… And to top it all off Jet was also born with orange blood as his dad is well known for his love of KTMs and all things orange and Austrian..! Jet was given his first KTM 50cc Mini at the age of 3, did his first race shortly after turning 4, and to say he is now hooked is definitely an understatement. He has already encountered the highs of success and lows and frustrations of mechanical failure, broken bones and injuries, but he has never let it deter him. Jet is exceptionally proud to be part of the Motorex Junior Development Team, he’s always had big dreams for his future and this has really cemented his goals and given him a big boost of confidence. His form this year has been impeccable, currently leading the championship in the Shell Series, and has set his sights firmly on the Qld Titles and Aussie Titles later this year. 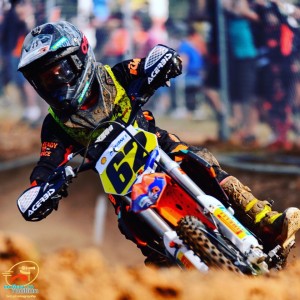 This little guy did not come from any motocross background, however he was naturally drawn to motorbikes from first sight. His dad and uncle grew up bush bashing at home, and from the moment Ryan was able he would crawl to the garage where Dad’s motorbike was (sorry to say it was a Yammy!) and would endeavour to climb on and pretend to ride and make moto noises. He started out on a kiddies quad, and asked to have a motorbike party for his 4th birthday where he received his first peewee. This quickly became his passion, joined Reedy Creek MX Club and began racing at 6 years old. As time went on his ability improved and he’s now up against some of the toughest competition in the country and is well and truly holding his own against the best. It’s easy to say he’s now clearly obsessed and always wants to ride no matter what the conditions. He has achieved some great results over the years, however his parent’s proudest moments have been at the 2013 Qld Titles where he received a Sportsmanship Award for helping a fellow competitor who was trapped underneath his bike during a race, and another Sportsmanship Award at Toowoomba this year for his goodwill and behavior noticed by officials on the day. Ryan is incredibly proud to be part of the team, he’s such a passionate racer and has the highest regard for his teammates and all fellow riders in this sport. He always aims to train and ride to the best of his ability, respect those who make it all possible, continue to make lifetime friends, and naturally hopes to follow in the path of his greatest hero, Ryan Dungey. 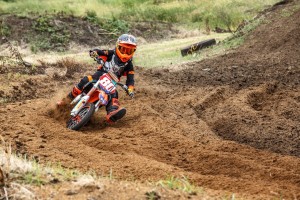 Dylan has his Nana to thank for his love of motocross. His older cousins rode MX so she decided to buy him a motorbike for his 3rd birthday. He was immediately hooked and the old bike soon gave way as he quickly moved onto a Honda CR50F. His family moved to Bunbury WA where he joined the Bunbury MCC and he began racing at age 4. Although competing in MX was new to the family they soon became as passionate as he was about the sport. The trusty Honda soon gave way to a KTM50 Mini and he has never looked back. He quickly moved up the ranks and enjoyed great success at club, interclub and state events, making some terrific friends along the way. Moving home to QLD has been a great experience and podiums at both the Shell and SEQ Series in 2015 were a great boost to his confidence. Like all riders, there have been some highs and lows so far, but Dylan always gives his best and rides with great sportsmanship. He shows a great deal of commitment and spends just as much time as his Dad in the shed working on his bikes and making sure he is ready for training and racing. He is very proud to be part of the Motorex Junior Development Team and to be learning from, and spending time with people who love motocross just as much as he does. DJ loves being able to race with his mates and his idea of a terrible weekend is definitely one without racing! He is really enjoying the step up to the 85cc Big Wheel class this year and can’t wait to tackle the Junior Lites class later in the year.
NICKNAME: DJ
AGE: 12
FROM: Sunshine Coast QLD
BIKES: 2015 KTM 85SX Big Wheel
MA MOTOCROSS GRADING: A Grade
YEARS RACING: 8
HOME TRACK: Coolum
ACHIEVEMENTS/CAREER HIGHLIGHTS:
2015 Australian Championships, 65cc – 5th place
2015 Shell Advance Sunshine State Series, 85cc – 3rd Place
2015 KTM SEQ Jnr MX Series, 85cc – 1st Place, 65cc – 2nd Place
2015 Coolum Club Championship, 65cc and 85cc – 1st Place
2014 Coolum Club Championship, 65cc – 1st Place
2013 WA State Championships, 65cc – 2nd Place
2013 WA State Championships, 68cc – Most Improved Rider
FUTURE GOALS: Travel the world as a Pro Rider, have fun riding in major competitions
FAVOURITE TRACKS: Coolum, Conondale, Bunbury
FAVOURITE RIDERS: Ryan Dungey, Ken Roczen, Ryan Villipoto and Cole Seely
FAVOURITE FOOD: Supreme pizza, Mum’s chicken and almond casserole
OTHER INTERESTS: BMX riding, mountain biking, making jumps in the back yard, watching motocross on YouTube
HIDDEN TALENTS: Playing guitar
MOST EMBARASSING MOMENT: Last year I was in music class playing the guitar and I fell over and broke my arm 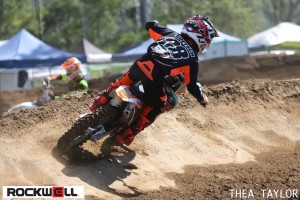 Living on property all of his life, Rylee grew up on farm quads & motorbikes from a very young age, starting off on a Suzuki 50cc quad then gradually working his way from a Yamaha Peewee to his KTM 65, where his love for racing all began. This is only Rylee’s 4th year of racing, starting on a 65cc when he was 10 years old, a little later than his team mates and some of his competitors, but he has certainly come a long way in a short amount of time. Rylee absolutely loves racing motocross, but it’s supercross that is his specialty and where he really excels. Unfortunately Rylee has had a bit of a rough start to the season this year, copping a bit of bad luck with mechanical breakdowns, a broken wrist just before the first round of the Shell Series and a couple of concussions to top it off, but if anyone has the grit and determination to get back up and keep fighting it’s Rylee! He is determined to give it his best shot to finish off the Shell Series on a high, and then concentrate on the SEQ’s, Qld Titles and the Aussies. Rylee is very grateful for the opportunity and proud to be part of this great team and is really looking forward to what results he can bring this year.
NICKNAME: Cliff
AGE: 13
FROM: Kalbar QLD
BIKES: 2016 KTM 85SX Big Wheel / 2016 KTM 125SX
MA MOTOCROSS GRADING: A Grade
YEARS RACING: 4
HOME TRACK: Tivoli, my back yard
ACHIEVEMENTS/CAREER HIGHLIGHTS:

The team are now halfway through the Shell Advance Sunshine State MX Series, and will also be competing in the upcoming KTM Motorex SEQ Junior MX Series, the Queensland Titles in Mackay and Hervey Bay, and the KTM Australian Junior MX Titles in Renmark SA.

To keep up to date with the team, their progress and results or just to show your support, make sure you follow the Motorex Junior Development Team on Facebook and Instagram.