Craig Hartley is a name synonymous with Australia Adventure riding and to put it simply; he’s a bloody legend.  Not only does he run Dalby Moto, he also partakes in more adventure miles than many other riders combined.

2015 marked Craig’s first year on the 1190 Adventure R and over the past year he has been putting the “Craig Hartley” special touch on his bike, to make it a truly one-of-a-kind Adventure weapon!

CRAIG HARTLEY’S NEXT LEVEL 1190 ADV R will be a multiple-part series, featuring in-depth information on how Craig setup his KTM. 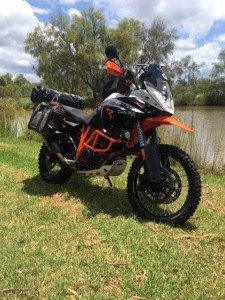 My first ride on the 1190 was a two day, 1600km ride to catch up with one of the 4-Day APC Rallies. The bike was basically standard accept for bar risers, grip warmers, a dongle to keep my preferred settings as standard, Akropovic muffler, tank bag and Dalby Moto saddlebag racks.

In this form it amazed me how well the new traction control worked when it was switched on, along with the ABS offroad mode that allowed rear wheel steering accept with absolutely no chance of front wheel lockup. I experimented with power modes between street and sport. For most, maybe street was more useable, but the fun concept of 150hp on sport mode kept coming back on to the analogue dash.

I remember on another ride, during one section along the Rocky River Road, with rain and tight corners everywhere and more suited to the big singles I was riding with, I switched to rain mode, traction control on and full ABS . . . and deadset there was no lack of traction anywhere!  Sometimes more power required but on that evening, the positives outweighed the negatives. Other things that were noticeable straight up were the dirt bike like steering lock and really light weight nimble feel of the bike.

Anyway – back to my first ride . . . After a late start on the Saturday and an 800km in 8 hours charge to catch up to the course and group, I pulled in to the Glen Innes pub feeling pretty fresh as well as confident. I felt the new 2015 KTM 1190 Adventure R was a bike worthy of spending more time on setting it up for the upcoming ADVX support role.

Day 2 was much of the same again, and while riding side by side with John Hudson on slippery granite tight corners, I realised how invaluable as well as how much traction and braking was enhanced with all the ABS off road and traction control modes. Not always my favoured mode in traction control, but very impressive how easy it is get out of slippery corners with out any fuss.

After leaving the APC at the finish point of Aratula, then doing a beeline for home, complete with a 3 pointer for my trouble, I realised what a great toy the big KTM 1190 ADV R was. 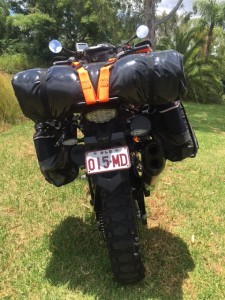 As I was to be a support rider for the ADVX, setting up lightly was priority.  So a light weight swag was designed over the old canvas style I had used forever which saved several kgs carried high on the bike.

As can be seen, the Andy Strapz saddlebags were used which carried two 9litre MSR dromedary fuel bladders in the left saddlebag, along with a litre of Stones and a litre of water in the outside pockets.

In the right I had 18/21″ ultra heavy duty spare tubes, (no use putting wrong size or light spare tubes in if you still have 3000kms to go to get to civilization).

Along with the tubes in the right side was my duck down light compact jacket that doubled for jacket liner as well as good night going out jacket. A couple of ratchet straps for repair work for whatever, a small first aid kit, spare room for two 1.5 litre water bottles and whatever else in extreme areas, and in the outside pockets a litre of engine oil and a litre of water.

I saved a lot of room in my saddlebags by hiding two 90 mm poly pipes approx 450 mm long behind the saddlebags. In these I had a bag of nuts and bolts, 2 tool rolls with a myriad of useful tools as well as a bag with adhesive tapes for repairing radiator hoses, araldites, devcon steel repair, test lite, electrical wire, tube patches and glue, superglue etc.

On the bars, a good set of Weathershield Barkbusters in case of a simple drop. A GPS mounted on the bars as the KTM GPS mount gives to much movement and vibration above the speedo. 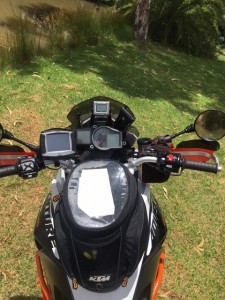 This GPS mount has become home for the Motorcycle Tyredog for tyre pressure monitoring as the standard unit on the bike became ineffective once UHD tubes were fitted. This is a good accessory as there’s nothing worse than doing a high speed section only to find you have a flat front tyre once you start slowing down to around 100km/h.

The Tyredog has low pressure alarms that alerts you before things get nasty. I did have the Spot Tracker on here but will carry it on the back pack strap from now on.

KTM folding mirrors are a great thing as when in heavily timbered areas, or riding in sand where a slow speed drop can see the end of a mirror, you simply fold them in to the middle of the bars. Mine were folded in from Mt Dare to Big Red.

Grip warmers are the standard KTM items that use the analogue dash and controls. I put a glasses case behind the fairing to save loosing glasses at servos as well as a pocket knife multi tool zip tied to the bar riser for quick access.

My cap lives on the right mirror and in winter I use the big mitts by Barkbusters to keep the elements off the hands. These proved great as well on the tracks the vegetation came right on to the wheel track.

The tank bag carried food, all chargers for phone and UHF, coffee and sugar, assorted nibbles, and in the left pocket, ear plugs and cig lighter along with tyre gauge and screw driver for quick adjustments. In the right pocket a small bottle of lens cleaner and rag.

From past experience, I knew we would definitely be doing some night work in the support role, so local business Dieselectrics was called upon to source some good LED spotties and to build a wiring harness to not interfere with the Canbus system on the KTM. 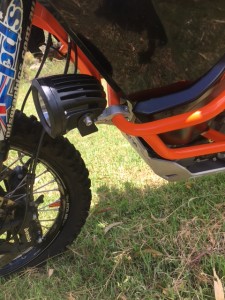 This was wired direct from the battery with a relay which then was triggered by the hi-lo beam power wire. To keep it legal we put a switch in near the 12v power outlet which is also where the relay hid behind.

These lights were mounted to the crash bars with modified Barkbusters bar mounts and then aimed up the table drains. Awesome result especially when Terry Staib and I rode out of the Finke Gorge in the dark and had to get to Alice.

The next mod will be to fit a LED light kit that replaces the standard lights which now appear to be a yellow colour in comparison. KTM 1190 owner and mate Rob Parker has fitted these with great success. A great white light mod to compliment the table drain spotties.

As can also be seen in this photo, a KTM bash plate is fitted which really is good quality, and stood up admirably to the rigours of central Australia.

Lurking in behind the left side of the fuel tank is a KAA Purge Unit which works by back flushing the fuel pump and filter for 1.5 seconds every time the ignition is switched off.

When John and I did the first reconnaissance ride for the ADVX in 2013, even though his 1190 had a few kms on it, we still had to replace a fuel filter before Warburton, so with 15000 kms of crap fuel through this bike, it is still running sweet as. We have used these purge units with great success in the 990’s as well.

That’s all from me right now, but stay tuned for Part II of my 1190 Adventure R ramblings in the next RIDE KTM Adventure news, featuring: