If you’ve sat aboard one of KTM’s 2017-model four-stroke MXers or Six Days EXC-F machines, then you will have noticed a new switchblock mounted next to the clutch perch: A map-selector switch that, for the first time ever on a production competition dirt bike, incorporates a traction control function. And if you’ve activated that “TC” and taken the bike for a ride, it doesn’t take long to realise just how effectively the system works.

But where did KTM’s traction control technology come from? How exactly does it work? What are its pros and cons? What’s it actually feel like to ride? And will KTM’s two-stroke models adopt TC technology in the near future? After collating feedback from KTM owners, dealers, racers and technicians, we reflect on the emergence of what appears to be widely regarded as the most cost-effective traction aid that production enduro bikes have ever seen. 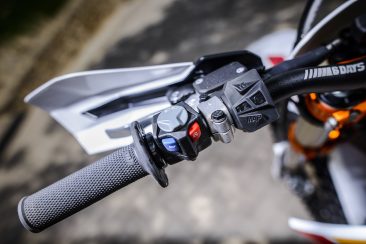 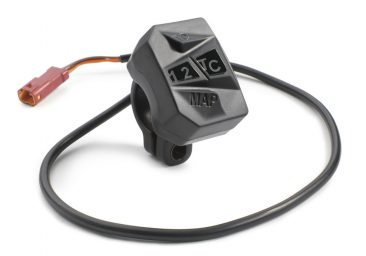 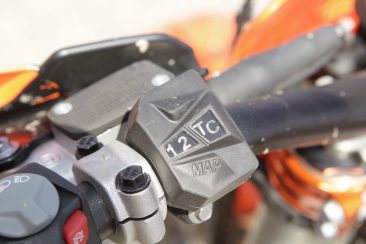 At this stage, traction control is only available for KTM’s four-stroke models. The TC system comes as standard equipment on KTM’s 2017-model motocross and Six Days EXC-F machines. The system is not standard on KTM’s 2017 EXC-F range, so you’d need to buy an optional Map-Selector Switch (which includes the TC activation switch) from KTM’s PowerParts catalogue for $189.99.

According to KTM’s Austria-based Off-Road Product Development Manager, Joachim Sauer, “Because not everybody wants that feature. If they do, it’s available very cost-effectively through PowerParts, or they can buy a KTM Six Days model, where that switch – along with many other premium parts, including the new tool-free fork preload adjuster – comes as standard equipment.”

Yes, it is. But the rulebook used by most racing federations around the world defines “traction control” as a device that uses a sensor on the rear wheel. As the ‘traction control’ technology found on the 2017 KTMs does not use any wheel sensors or GPS devices whatsoever, it’s 100% legal.

The Traction Control (TC) function is integrated into the bikes’ ECUs, and activated by KTM’s all-new, bar-mounted Map-Selector Switch. Instead of using a sensor on the rear wheel, KTM’s TC system simply analyses throttle inputs against sudden increases in RPM, and retards the power accordingly (specifically via changes to the map’s ignition timing, not fuel) to maximise rear wheel traction.

Not according to one of KTM’s key engine development Project Leaders over the past decade, Michael Viertlmayr.

“It’s true that several race teams in Europe and America – including KTM’s – have used GET ECUs and the company’s GPA technology for a few years now, but we developed our TC system in-house at KTM,” Viertlmayr explains. “When we first tested it three years ago, we were initially very sceptical. We were also unsure of how off-road guys would embrace the idea of more electronics. But after the first two times we tried it, we quickly changed our attitude. Not only did it immediately prove to work very effectively, but it was also a simple system because you don’t need any additional wheel or gyroscopic sensors. In basic terms, the ECU is able to determine when, for a given throttle setting, the rear wheel is spinning up too fast. In those instances, it simply retards the power. We were able to adapt it to each specific gear, too. The feedback we received after the 2017 bikes’ international launches was overwhelmingly positive, even though the conditions didn’t fully show what the system was capable of. In terrain where you have only small patches of traction in between loose rocks or slippery mud, the full potential of the traction control is even more evident,” Viertlmayr went on to say.

No. In the interests of keeping the system simple, affordable and effective, it’s not adjustable. But because the TC function applies to both Map 1 (standard) and Map 2 (aggressive), you effectively get four maps from the one Map-Selector Switch. And intelligently, the map and TC settings are retained, even when you stop (or stall) the bike.

It’s nothing like the TC systems used on older-style, large adventure bikes (where there’s an audible, stuttery, hit-the-rev-limiter type of interruption to the power delivery), or even the more sophisticated TC system used on KTM’s new adventure models, where the ECU controls the butterfly angle to limit power. The TC system used on KTM’s competition dirt bikes is more of a subtle de-tuning of the power delivery, but only when absolutely required. The system is calibrated so that you can still get the rear wheel spinning-up and the bike’s rear-end stepped out as sideways as you like when the terrain offers consistent grip levels. But in really slick conditions – such as loose rock or patches of wet, soapy clay – it takes the emphasis off the need for super-precise throttle control, and it helps keep the rear wheel hooking up. That results in a bike that consistently tracks straighter, which makes it easier and safer to ride – especially as the rider becomes fatigued.

Well, conventional wisdom would expect that to be the case. But the overwhelming feedback – from KTM’s product development team, Australian dealers, owners and media outlets – all seems to suggest that KTM’s TC system is also proving very effective on the smaller-capacity machines, mainly because they spend more of the time higher in the rev range and are equally inclined to break traction suddenly when the rear wheel hits an unexpectedly slippery patch of terra firma.

Thankfully, yes. In fact, it’s dummy-proof. Unlike the previously fiddly little Map-Selector Switch, the all-new rubberised, bar-mounted switch is bigger and super-easy to use on-the-fly. It has different-coloured lights that illuminate for each setting (white and green lights for Maps 1 and 2, respectively, and an orange light to indicate the TC is activated) – meaning the switch confirms at a glance exactly what settings you’ve selected with your left thumb.

Again, feedback across the board has suggested there is really no downside to leaving the TC system constantly engaged, whether you’re using Map 1 or 2 – because it only takes the edge off the power delivery when it’s absolutely necessary. That said, in deep, boggy sand, where you can happily use all the wheelspin you can get, there’s little point in activating the TC. In fact, in these conditions, it’s better to deactivate the system to access the engine’s full horsepower.

Absolutely. The introduction of the TC system has allowed KTM’s engineers to better harness the gains in the 2017 engines’ torque and outright power, which ensures the bikes remain easy to ride. In fact, it makes the 2017 models more rideable.

The TC function has also meant that mapping changes are now simpler and more intuitive. In the past, many owners (particularly with the larger-capacity models) would use Map 2 as a softer, traction map (and this would require them to first adjust the 10-position dial on the airbox-mounted switch!). For 2017, with the TC function, Map 1 is always standard and Map 2 is always aggressive, and the TC function effectively replaces the softer/traction map. In other words, the TC function has allowed owners to access a broader and more versatile range of maps, with one bar-mounted switch letting them toggle between them.

In the wake of KTM’s 2017 enduro bikes’ launch in Europe, many independent dirt bike media outlets said that the Map-Selector/TC Switch ought to be the first upgrade that owners make to their 2017 EXC-Fs because it instantly made the bikes even more versatile and rideable. Now, several months on – with a lot of those outlets undergoing further testing of the TC system via their long-term project bikes – those views only seem to be reinforced.

Yes, but not until KTM’s two-stroke models move to fuel injection, according to KTM Australia’s Technical Services Manager, Rob Twyerould.

“The reason for that,” explains Twyerould, “ is that for fuel injection, we run an ECU with much higher processing power and the ability to incorporate those additional features. As an ECU has control over the air/fuel mixture and ignition settings of a bike’s engine, it can be used to get the traction control functioning properly. With a carburetted bike, however, the CDI it uses may not have the processing power to run a traction control system. Plus, because the CDI doesn’t have any control over the engine’s air/fuel mixture, you’re at the mercy of the owner having the bike jetted correctly to have the traction control working correctly. Even though TC systems only affect the ignition timing, not the mixture, the way the engine runs overall will have an impact on how effective the traction control system will be. So, once KTM moves to fuel injection on its two-strokes models, it’s much more likely for traction control to be incorporated into these models,” Twyerould went on to say. 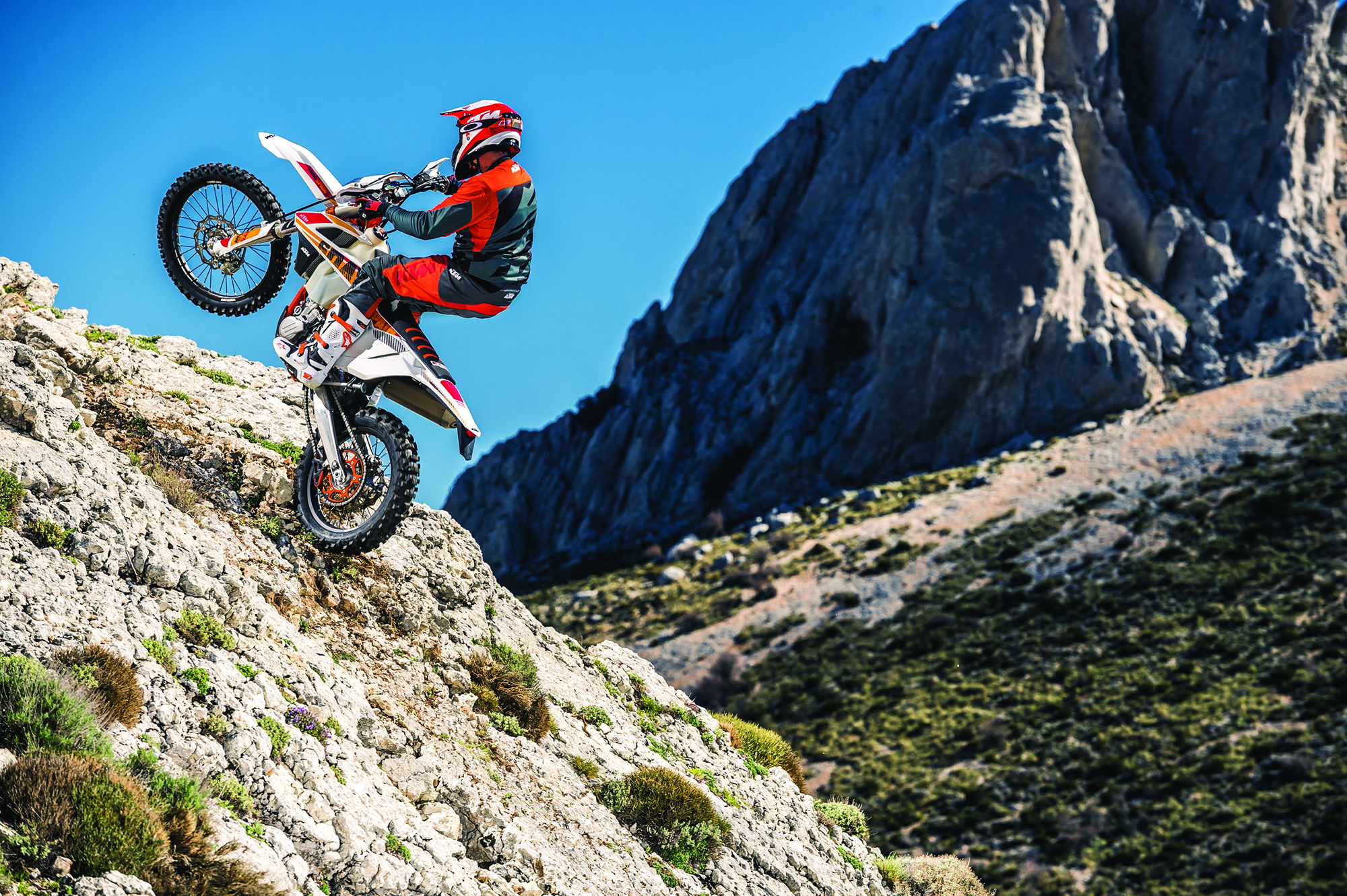