Over the past five years, KTM Motocross Racing Team’s Kirk Gibbs has made a habit of turning adversity into success. So his recently busted femur is good news for the 2017 MX Nationals season, right?

After a crash that threatened both his career and life in late 2012, Kirk Gibbs rewarded the enormous faith that KTM put in him by winning the MX Nats’ premiere-class title in 2015. A year later, he came just 6 points shy of defending it, despite busting his pelvis in an off-season crash. Now, after a broken femur cruelly quashed Gibbsy’s lifelong dream of representing Australia for the first time at the 2016 MX of Nations, the 28-year-old is back and intent on claiming his second MX1 title with KTM in 2017. And with injury so often being a precursor to Gibbsy’s success, it’ll be hard to bet against the South Australian native when the MX Nats season gets under way in April.

To put the laconic Gibbs’ racing achievements into perspective, we revisited a memorable Kirk Gibbs profile that Transmoto Magazine published midway through the 2013 season, called ‘Reanimated’, an excerpt from which appears below…

It’s late August, 2012. For the first time in three years, Kirk Gibbs isn’t in title contention as the MX Nats rolls into Queensland’s Coolum Pines motocross circuit for the series finale. The Serco Yamaha rider has finished runner-up in the MX2 class in 2010 and 2011, but a spate of injuries has derailed his 2012 season. Desperate to step up to the MX1 class, Gibbs wants to make a statement at Coolum; a performance that’ll ensure he’s on team managers’ shopping lists for 2013. He cards a pair of third-place finishes in the first two motos, and is intent on ending his season the same way he began it; with a win.

But on the opening lap of the season’s final 30-minute moto – high over the notorious tabletop that’s played ‘host’ to several major accidents – Gibbs comes together with another rider and his bike is smacked from his grasp. He lands with a sickening thud and is mown down by a couple of riders who can do nothing to avoid it. The ferocity of the impact silences the adjacent hillside of spectators, and the body language of the first riders to approach the motionless Gibbs telegraphs their grave concern for his wellbeing. His helmet, body armour and neckbrace are all in tatters, and there’s blood everywhere.

The Racesafe intensive care paramedics are on the scene in seconds. They issue a “Code 99” over officials’ radios to signal ‘critical injury’ and the race is promptly red-flagged.

By the time the young Queenslander has been rushed back to Racesafe’s medical truck in the pits, there’s hysteria from family and friends amid talk that he’s unresponsive and still being assisted to breathe. On everyone’s minds is the unthinkable prospect they’re witnessing a repeat of Andrew McFarlane’s tragic death.

After what feels like an eternity, there’s news that Gibbs is finally breathing on his own and about to be transported to hospital. The outpouring of relief is just as moving as the raw grief that precedes it. And as the ambulance makes its way from the track, attention slowly returns to the two national motocross titles that still hang in the balance. But everyone’s rattled, and the rest of the day at Coolum takes on a much more sombre tone.

Six weeks later, I run into Kirk Gibbs at the Phillip Island round of the 2012 Australian Supercross Championship. He tells me his recovery is on-track, but he’s heeding doctors’ advice to stay off the bike for another couple of months. He explains that doors keep closing on prospective deals, and he suspects his Coolum crash might have turned him into ‘damaged goods’ in team managers’ minds. The laid-back, quietly spoken Gibbs looks uncharacteristically agitated. He mumbles something about “maybe giving it all away…” but pulls himself up mid-sentence and quickly disappears into the crowded pit paddock.

Fast-forward a few months and Kirk Gibbs is a totally new man – a resuscitated, resurrected, reanimated man. He’s scored an MX1-class ride with the Motorex KTM Racing Team. The New Zealand Motocross Championship has confirmed he’s back to his former self on the bike. And with a newfound mental fortitude, Gibbs has set his sights on a season he hopes will repay the enormous faith that KTM has shown in him. 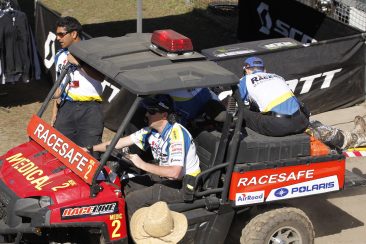 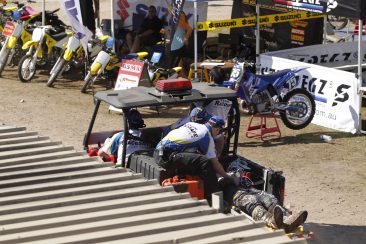 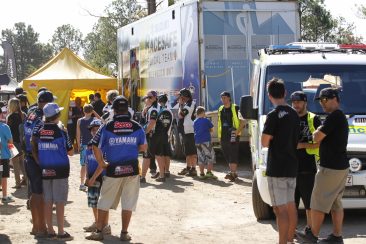 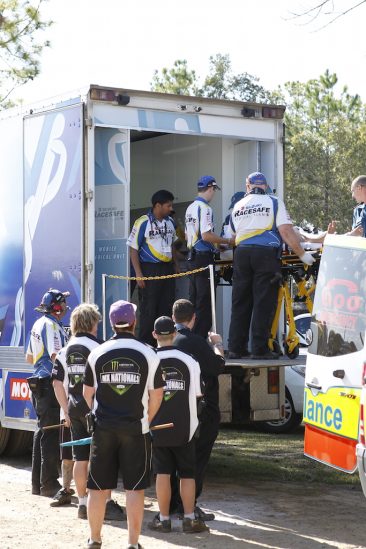 After such an up and down 2012 season with Serco Yamaha in the MX2 class, Gibbs was determined to go out with a bang at the Coolum finale. Fate, however, had other ideas…

“I can remember everything up to my Coolum crash,” Gibbsy begins to explain. “I wasn’t in contention for the title, but the day was going pretty well. I’d got a pair of thirds in the first two motos, but I was off the pace with my teammate, Luke Styke, and Josh Cachia. In the final race, I missed the jump out of the gate. I came out of the first turn about mid-pack and hit the big tabletop wide open. All I remember is seeing a yellow bike come across in front of me. It took my bike out from under me and then … that’s all I remember. I opened my eyes and saw little flashes in the Racesafe truck, but the first real memory I have is when I was in the ambulance on the way to the hospital.”

Gibbs says he’s heard many stories from family, friends and even strangers about his Coolum accident, but it’s clear he’s in no rush to dwell on the incident for too long. Instead, he refers to an amusing story one of his best mates (and former team KTM rider), Brenden Harrison, tells about the day: “Brenden had his leg in plaster at the time and was on crutches,” says Gibbs. “Apparently, he happened to be standing right next to where I crashed. As he’s telling me about it, he starts mimicking how he was crutching flat-out; trying to cross the track and get to me. But that’s where the funny stuff ends.

“Todd [Waters] said he was right there, too,” Gibbs goes on to say. “He said that, after I’d gone down, I got run over by a few other riders. By piecing together other things I’ve been told, it sounds like I wasn’t a pretty sight when they first got to me. My armour, neckbrace and helmet were all busted up. Apparently, other riders on the scene went white when they saw me. My helmet strap was blocking my airways and there was blood in the back of my throat and all through my helmet. I wasn’t breathing for three to four minutes and they had to put a defibrillator on me to get my breathing started again. Beyond that, I haven’t gone out of my way to find out any more details. I’m not sure I want to know.

I just know that I’m incredibly lucky that the Racesafe guys were only 30 metres from the crash and could get to me straight away. If they hadn’t been, you wouldn’t be speaking to me today.”

And what about the impact on his immediate family? Has the Coolum incident been the topic of dinner conversation? “Well, to tell you the truth, I still haven’t talked to my dad about the accident,” Gibbs concedes. “He was one of the first people who saw me; when I wasn’t in a good way. When he came into the hospital, he was visibly spooked. I’ve never seen him so freaked out or upset before, and once I got the all-clear, he just said, ‘I’ve got to go; I can’t stay here’. He was so shaken up by what had happened. I feel sorry that my old man had to see that, and I’m just glad my mother wasn’t there.”

Accidents of that magnitude are always life changing, and often career-ending. But was Gibbs ever in doubt about getting back on the bike? “After putting my family and friends though something like that, the accident did make me think about giving the sport away,” he says frankly. “It’s pretty obvious that the experience was a lot scarier for other people than it was for me, as I can’t remember it. That said, if I didn’t get a 450 ride for 2013, I think I’d be out of the sport now. That’s why I just can’t thank the KTM guys enough for giving me this opportunity.” 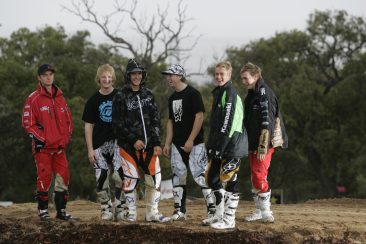 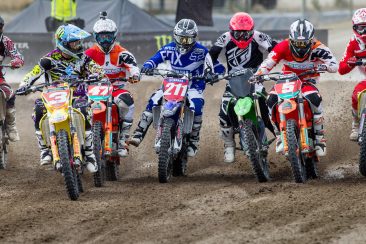 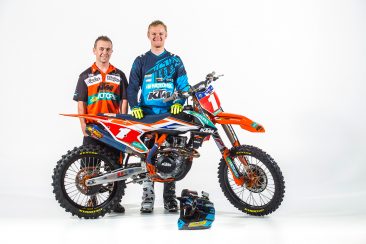 So, with no deals on the horizon for season 2013 – in either the MX1 or MX2 class – how did the ride with the new-look factory KTM team come about?

“I hadn’t had the best year. Plus, I’d finished it off with a bad crash,” Gibbs says. “So it’s easy to understand that team managers would look straight past me; at least until I’d proved I wasn’t carrying any ongoing psychological problems. So when KTM team manager, Rob Twyerould, came to me and said he thought KTM could put a solid deal together for me, I could hardly believe my ears. The KTM guys had seen my Coolum crash and they knew about my injuries, so I’m sure they were thinking I may never come back from it.

Offering me a deal was a massive gamble for KTM, and a career lifeline for me.”

Despite the fact Kirk Gibbs was hardly in a strong bargaining position, KTM’s offer was intended to send a message about their faith in the guy’s abilities, rather than take advantage of his predicament.

“When we sat down to go through the contract and I saw the sign-on, I did a double-take,” remembers Gibbs, with a laugh. “I said, ‘Are you serious?’ It just blew me away. But it wasn’t just the sign-on; Rob T also talked me through all the exciting plans that KTM had for the team. He explained that KTM wanted to make sure their riders were ambassadors for the brand by attending something like 36 races over the season. Rob even said I could have a few days to think it over, but I signed the contract on the spot. Now all I want to do is prove to KTM that they made the right choice, and prove to my family and friends that choosing to continue racing was the right decision for me.

“I really want to go after a championship,” he says matter-of-factly. “I’m not saying that I’m going to win this year, because experience definitely counts in the MX1 class. But I’m not going out there to run top-10, either. I’ll line up believing I can win motos. I’ll put my best foot forward and have a real good go at it. I think it’s realistic that I can have a crack at winning a title in the next year or two.”

BACK TO THE PRESENT…

Last year, after 10 gruelling rounds (and a bung knee for the back half of the season), Gibbs ran a gritty second to Dean Ferris in the MX Nats title – by an agonisingly small 6-point margin. Then, to add insult to injury, Gibbs busted his femur in a supercross training crash – an injury that cruelly deprived the KTM rider from representing Australia at the MX of Nations for the first time ever, and kept him off the bike until Christmas.

With Gibbs still on the mend, he’s decided to sit out the New Zealand Motocross Championship that’ll be wrapped up in late March, deciding instead to return to the track at the 2017 KTM Conondale Cup, staged at the iconic Green Park circuit in the Sunshine Coast’s hinterland on March 4-5. Given the obstacles that Kirk Gibbs has faced and overcome in recent months, don’t be surprised if he comes out and gives his regular rivals – guys such as Dean Ferris, Todd Waters and a huge field of world-class riders – a damn good run for their money at the KTM-sponsored event next weekend.