Webb, a two-time Western Regional 250 SX Champion, joined the Red Bull KTM Factory Racing Team at the end of 2018 and the American racer from North Carolina immediately went to work to pair himself with an all-new motorcycle and team. With 5-10 finishes in the first two rounds, the 23-year-old quickly found his stride, as he earned his first-career 450 SX victory by round three. The KTM ace repeated the win once again at round four, before going on to secure a total of seven Main Event victories allowing him to carry strong momentum into 17th and final round in Las Vegas. 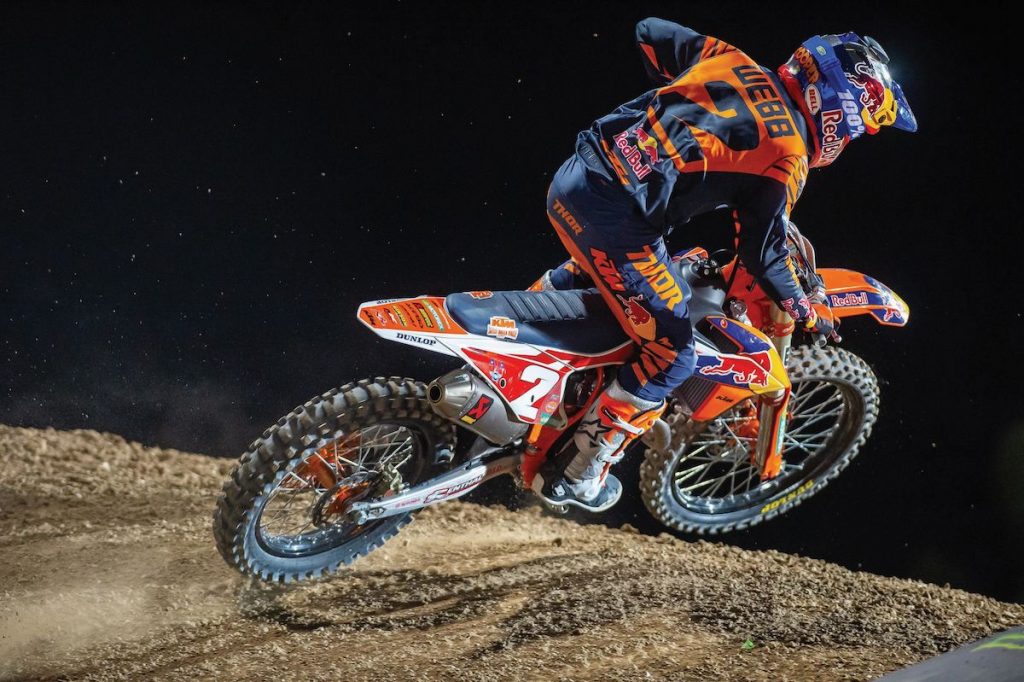 Coming in with a 23-point advantage over the rest of the field, Webb played it safe at the final round. Qualifying fifth, the newly-crowned 450 SX Champion secured the holeshot in his heat and assumed the lead early on. With two laps to go, Webb felt some pressure from Eli Tomac and he quickly settled into the second-place position, shifting his focus towards the Main Event. With a solid gate choice for the main, Webb powered his KTM 450 SX-F into third off the start. From there, he maintained a consistent pace throughout the Main Event to score a third-place podium finish en-route to securing his first prestigious 2019 AMA Supercross 450 SX Championship, an FIM World Championship. KTM is also celebrating its 300th world title victory with Webb’s Supercross win. 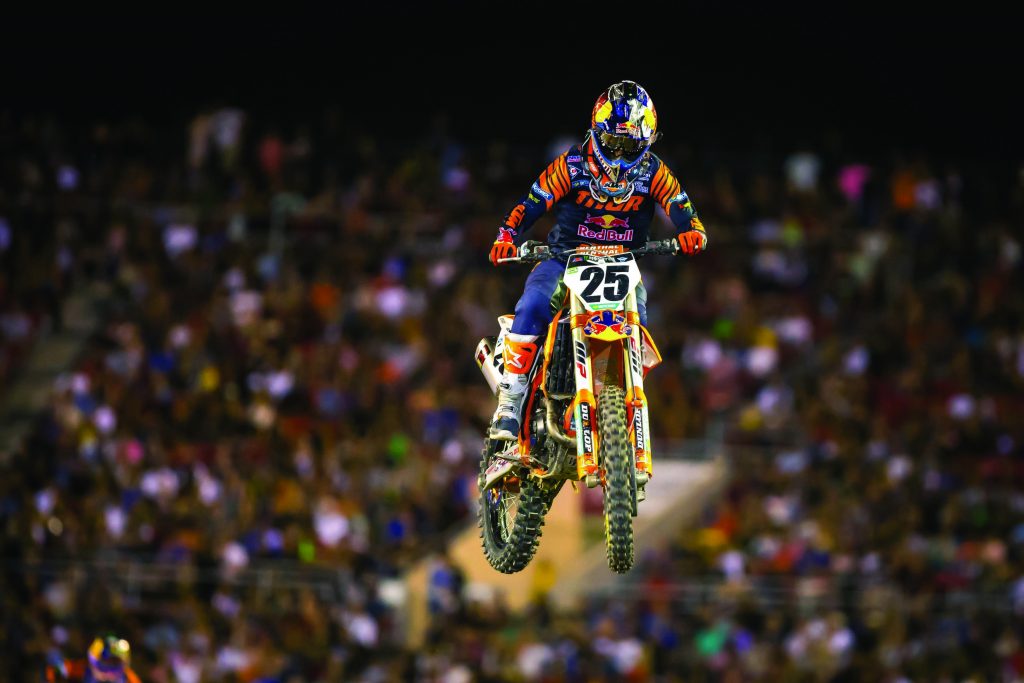 Frenchman Musquin concluded his season with a second-place finish for a superb third position in the final championship standings. Musquin recovered from a pre-season knee injury to be in the title fight until the penultimate round with 11 podium finishes including two victories to his name at the series’ finale.

Cooper Webb: “It’s been an incredible journey. This KTM team believed in me, they took me in and transformed me back to where I always knew I could be. This year was not expected at all and I can’t thank them enough for giving me this opportunity to get back into this level and to do it this way is unreal. It’s a dream come true, I’ve had it since I was a little kid. It’s an incredible feeling.” 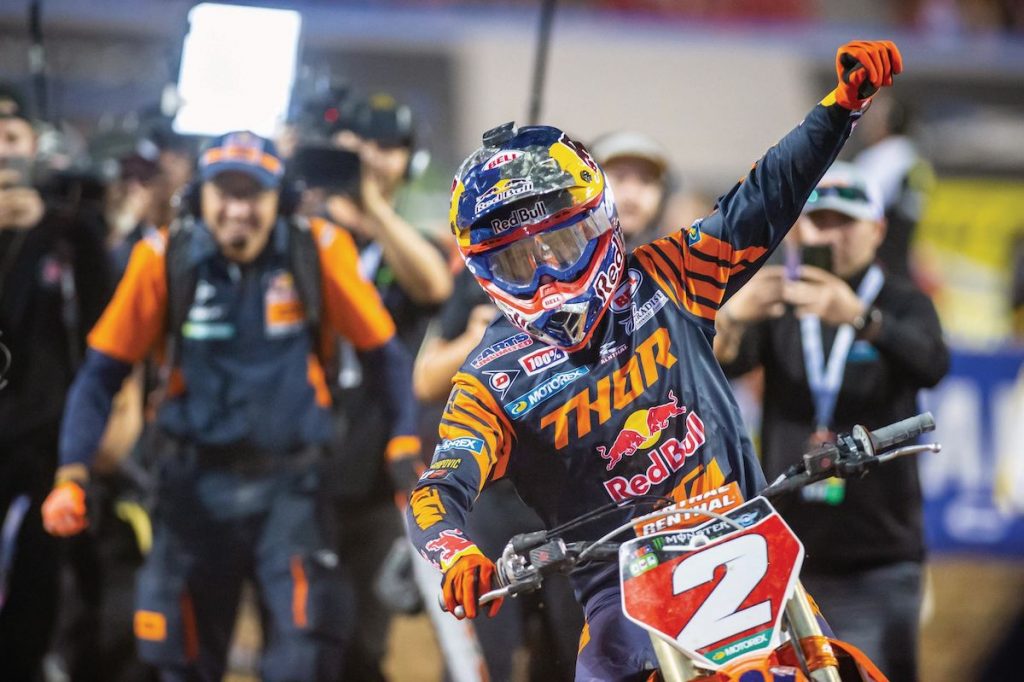 Marvin Musquin: “I was looking for one more step than last year but overall it was a decent year. I gave my best this season and that’s all I could do. A little bit of mistakes and the end of the year took me out of the fight but I’m looking forward to next year and getting ready for outdoors.”

Ian Harrison (Red Bull KTM Team Manager): “It’s a little surreal right now to win this championship with Cooper. I’ve been through it before many times with Roger [De Coster] but to be in this position – it hasn’t quite sunk in. Going from finishing ninth in the championship last season, we weren’t expecting too much from Cooper in the beginning – we were hoping for one win. Once he got the one, then he did it again and his confidence went up from there and he really managed his races well. I think he was outstanding, but at the last round in New York when he wasn’t feeling well and he came through in the clutch time with a win, that’s the test of a true champion and he did it. Marvin was super impressive this season. He started the year off with a knee injury and not riding very much and I was amazed at how well he kept his fitness up and how well he adapted to the surroundings and the championship chase and he got himself in there quickly. For a while there, he was in the hunt for the title, too. At the end, he had a few things that didn’t go his way and he lost a little steam but I think it was an outstanding season for him and I’m super proud of him.”

Pit Beirer (KTM Motorsports Director): “We are very proud to have won the 2019 AMA Supercross 450 SX Championship. I would like to congratulate Cooper, Marvin and the entire Red Bull KTM Factory Racing Team on their hard work to be at the sharp end of the races week in, week out and for realizing our dream of another championship. For Cooper to have become part of this team and win right away is special; it’s a credit to all of our staff including Ian, Aldon and Roger who were able to help Cooper unlock his potential, find good momentum and reach our goal – something we work hard at in KTM. But the energy, passion and determination of our people extends much further than the team – in motorsport, R&D and beyond, everyone in KTM is working hard for this, so I would like to thank and congratulate all of those involved in this project. Our offroad success story continues – I’m happy that we can celebrate this achievement and enjoy this moment.” 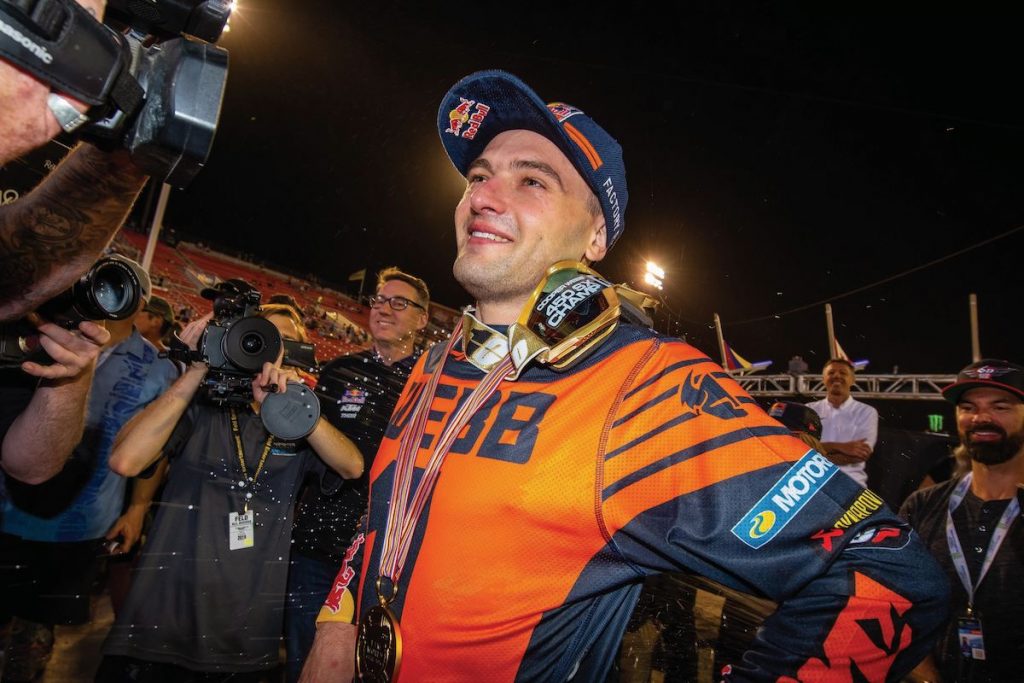 The Red Bull KTM Factory Racing Team will enjoy one weekend off from racing before jumping into the opening round of the 2019 AMA Pro Motocross Championship in Sacramento, California on Saturday, May 18.