Motorbikes are in my blood. It started off in a paddock behind my Dad’s shop, progressed to joining the Sunshine Coast Motorcycle Club and riding trail rides and club motocross events, to riding and racing motocross every weekend – even competing at a national level (once), then to racing enduro and scoring a couple of state level series wins (at best), to now working within the industry and going trail riding most weekends. Yet I always claimed ‘I’ll never ride a road bike’. Here I am . . . Eating my words with a KTM 200 EXC and now a KTM 390 Duke both sitting in my garage. I’m the converted, and here’s what I think about my KTM Duke 390, 1 month in!

After falling madly in love with KTM since hopping on a 200EXC less than a year ago, and being restricted by a RE license, it was pretty obvious I’d end up on a 390 of some description – but RC or Duke? Being a diehard dirt fan, I couldn’t bring myself to even consider the full-faired sporty stylings of the RC. I wanted a road bike, but I was prepared to give up my roots that easily. The KTM 390 Duke was in my sights.

Even before riding KTM’s naked answer to the LAMs market, there were some major aesthetics that attracted me to this neat little piece of engineering. These things are sexy! The angular styling of the tank and bodywork is right up my alley. The overall length of the bike is also a major attraction, it’s so short! The bodywork finishes around the same spot as the rear axle. For someone who is simply not accustomed to the road, having a physically small bike was a huge selling point. Finally, who could go past that bright orange colour? For a true KTM lover, orange is definitely the new black. With bright KTM orange rims and laser-cut steel trellis frame, I was hooked.

My first thoughts when hopping on the 390 Duke for the first time was . . .Woah, I can touch the ground! I’m what you’d call average-22-year-old-girl height… so pretty short. On my 200 EXC I don’t have any issues, but at the same time, I don’t stop at traffic lights and stop signs in the bush! I was pleasantly surprised at how comfortable the Duke was. I kind of ‘slotted’ into the seating position really easily, and for someone who was expecting to be super uncomfortable, it was a welcomed surprise. The riding position was really natural for me – maybe that’s because it was reminiscent of a dirt bike. The next thing I noticed – and quite possibly the real seller for me was how light it was. 20kg lighter than Honda’s CBR250R, 30km lighter than a Kawasaki Ninja 300 and nearly 40kg lighter than Honda’s CBR500R, the Duke weighs in at only 139kg. For me, that was a huge benefit. Not wanting to play into gender stereotypes, I’ll just say that I personally am not the strongest. I ride a two-stroke dirt bike and love being able to feel totally in control of the machine, because I physically can be. The same goes for the road. Being able to move the bike around with small shifts of my body weight, being able to easily push it around, and knowing if I dropped it, I wouldn’t have to think twice about picking it up again. Winner!

My absolute favourite thing about this bike is the technology. The ‘dashboard’ is awesome. I know that plenty of people might tell me that ‘all good bikes these days offer similar technology’, all I have to say is that the dash instruments on the 390 Duke provides all of the information I could possibly need, leaving off anything I don’t need to know. It tells me the fuel economy I’m getting, how many km until I’ll be out of fuel and it even tells me how many kilometers until my next service! That’s a huge advantage for someone like me.

When it comes to the bike itself, it has everything you could need. ABS as standard is a huge benefit – most bikes in this class don’t offer ABS on their standard models, and tend to charge $500 for ABS. With an 11 litre tank, the fuel economy is awesome. It costs less than $15 to fill the tank from dry, and it takes me to work and back (on the other side of town) 4-5 days before I have to fuel up again. Initially, I was expecting the 375 cc single cylinder engine to struggle down the highway, but at 110km/h, it had no sign of giving up at only 5-6000rpm. I was really impressed.

I took my new 390 Duke for a Saturday ride over Mount Mee and I soon realised I’d made a great decision. This bike is FUN. It’s like a dirtbike for the road and that’s exactly what I was looking for. It handled like a pro on the windy roads and made me (a complete road amateur) feel confident and in control the whole time.

Now a month into having the Duke in my garage, I’m still just as impressed. I’ve driven my car twice since I bought it and I can’t wipe the smile of my face! 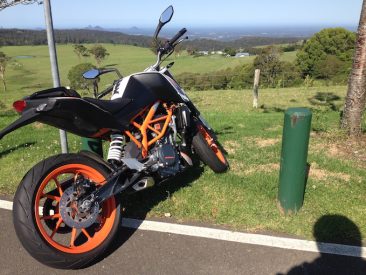 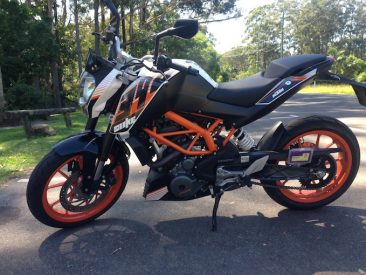 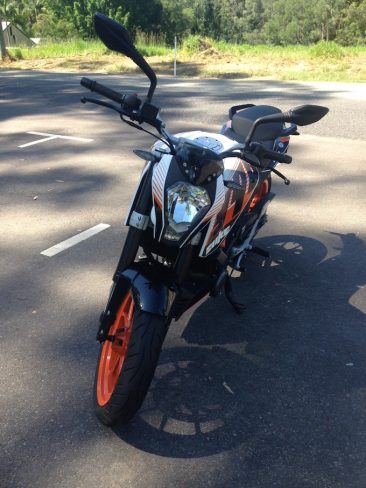 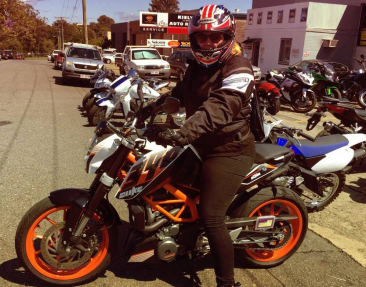