The inaugural KTM New Zealand Adventure Rallye “Coast to Coast” in December 2016 was special for many reasons – – launching the Rallye concept into NZ, having Chris Birch set the course, and bringing 80 KTM adventure riders together for one week. But there was one rider who attended that made the event that little bit more unique and that was Takashi Tsujiguchi who shipped his bike all the way from Japan to participate!

It all happened when I met Chris Birch in Japan – our adventure bike riding hero.

KTM Japan invited Chris to have 2 days lessons in Japan in 2016. Chris explained about the idea of the very first KTM rally in New Zealand, and I was enticed by the fact the event will be both for advanced riders and occasional off road riders, and he will be the route setter.

We, Japanese riders who live in the country where off road is limited, always wanted to ride big adventure bike on long winding off road in the wildness. The rally in New Zealand sound promising that I could enjoy off road riding as much as possible in such a beautiful adventure land. After talking to my fellow riders and contacting KTM Japan, I realized that I will be the only one from Japan to join this event, but so what? Facebook fun page has been created and sizable riders showed their intention to join, so I gave a shot and applied to this event.

The hard decision I needed to make was either to rent a bike or to bring my own R. I exchanged emails with Rosie, Marketing Coordinator at KTM, and found that R rental was sold out, which lead me to conclude “bring my own R!”. To sum, shipping the bike back and forth with Carnet took time, was expensive, required lots of paper works. However, I believe you agree that every adventure riders dream to ride her/his own bike in foreign countries. 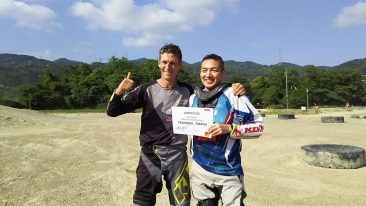 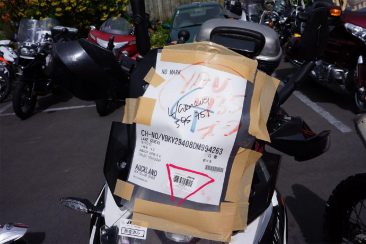 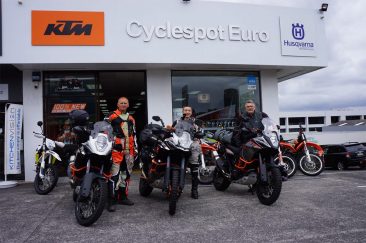 Grant from the Cyclespot in Auckland offered me to ride together to the rally starting point Papamoa Beach Resort with Andre, another rally participant. They intentionally avoided highway and stopped at several sightseeing spots on the way to Papamoa. I got used to ride in New Zealand thanks to their navigation.

When I checked in, I was overwhelmed by the number of Big KTM bikes. Because of so many orange color KTM bikes, certain area of Papamoa Beach Resort looked like “beehive”. In fact, all rally accommodations, major gas stations and restaurants, it looked as if they were attacked by Big orange bikes and dusty rogue riders.

Local Kiwi riders, Johan (R), Kris (SD), Roland (690), Al (690) kindly allowed me to accompany with them, which was huge relief for me, because I could rely on them for navigation, and ask them to rescue me when I was in troubles. I also met advances off road rider, Victor (custom graphic 950 SER), who occasionally helped me at difficult route, and Dave (SD), the owner of Motorcycle Adventure Dirtbike TV on Youtube, who paid attention to me throughout the rally. 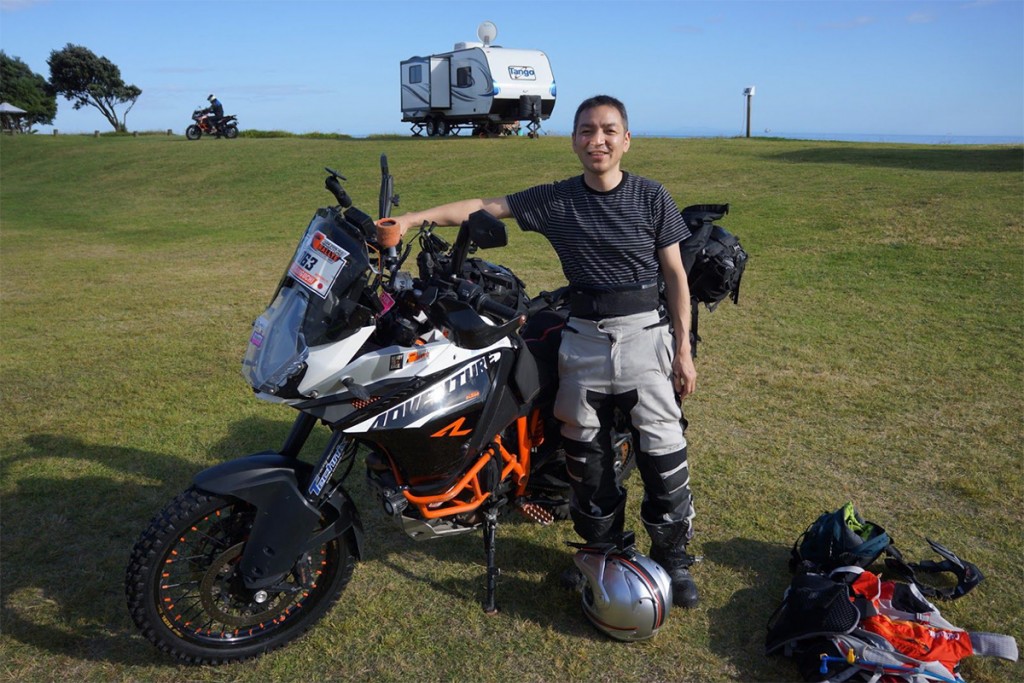 Day 1 was not tough off road, meat for riders to prepare for much tougher road starting from Day 2. This arrangement was good for me since I leaned the type of off road in New Zealand, how slippery and dusty the road was, and I could exercise riding on washboard, ditch, convex off road. The route was mainly farm road, and I could easily confirm the number of sheep outnumbered New Zealand population but not sure by how much since I did not count sheep while riding . . .

In the morning of Day 2, I waked up early and walked along the beach, saw beautiful rainbow, a good sign of wonderful day. Thanks to a little rain during the night, nubby tire held the off road tight and riders could enjoy dust free riding.

Today’s highlight for me was Lake Taupo. My room was “Lake view”, with the Lake Taupo in front and snowy mountain on the back. Sometimes riders should stop engine, relax, and enjoy breathtaking scenery like this. 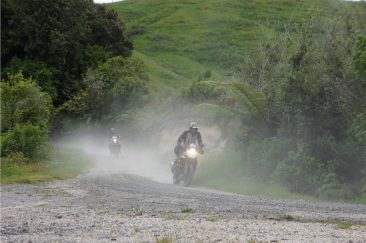 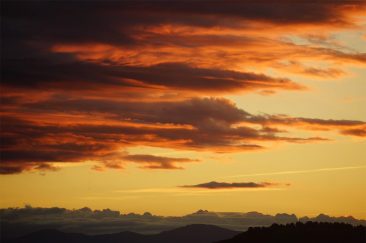 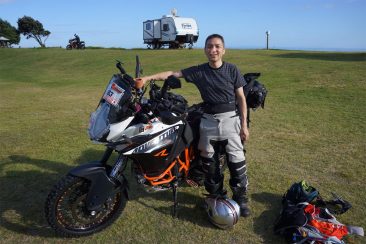 Day 3 was a 300km loop on the edge of Lake Taupo. First couple of off road were so smooth and nice winding road in the pine woods, so when I reached the diverting point, I thought Breakout route was not so tough as I imagined. Then, I decided to challenge Breakout for the first time in this rally. It turned out nightmare though…

Literally at the very first corner of the Breakout, I felt down to mud ditch and consumed lots of energy. Next 15 meter, I could not overleap fallen log, my foot barely touch the ground. I am just 170cm, 65kg small rider, R is not designed for me… KTM officials shouted “Confidence!”, which I already lost… 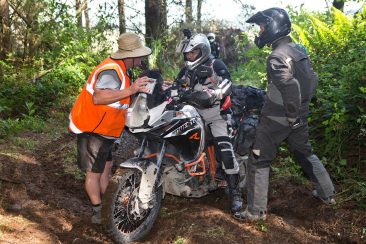 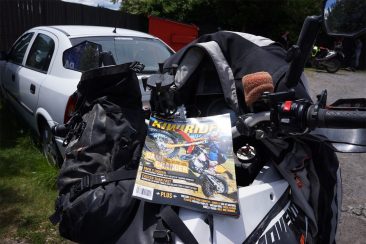 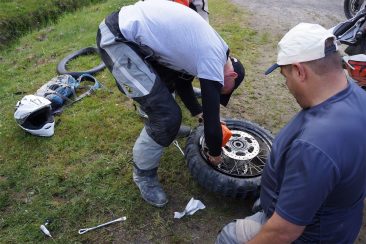 I talked to myself, “I should not be injured, I should bring my bike back to Japan. I should not take wild risk” etc. With enough self-excuse, I decided to give up and went back to ordinal route. On the way back to the original route, KTM official gave me a magazine “Kiwi rider’, and said “Read and Practice!”. I know, I know, but…

In the middle of Day 4, we found that one rider had flat tire, and we helped him to repair this. First, we tried to use green “Slime” for quick and easy repair, but it did not work, so we decided to change the tube. Side wall of Mitas is hard and it was quite time consuming to change the tube on the road side. While we were working, another rider stopped behind us, flat tire on the front. Tire changing party just started!

I brought and carried all necessary items to fix flat tire, new tubes (both F and R), 3 tire spoons, handy bead breaker, rim protector, new bulbs, electric air compressor, even wet tissues to clean our hands. I could claim that I serve as Official rescue who carry such items (heavyweight tools made me difficult to ride off road though).

Day 5, many riders rushed into 1st Breakout, a spectacular 20km steep firm land. Luckily, the firm was not “4 Chilly” wet condition but only with a little morning dew, so I decide to challenge this as my final attempt to experience Breakout.

Several slopes were so steep, required me to have long approach to get enough speed to climb up a hill.

The view was full of contrast, vivid green firm land, clear blue sky and sheep-shaped white cloud. What a fantastic riding! I fell down 4 times and lost right handguard, but it was really rewarding challenge. 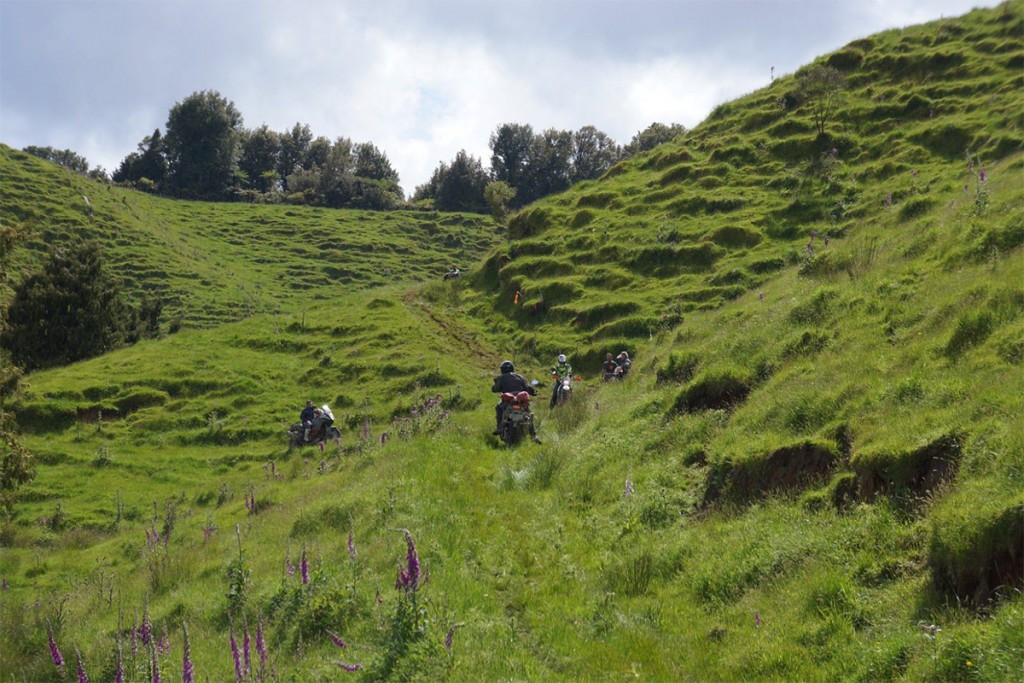 After 250km riding, KTM officials welcomed us at the final destination New Plymouth and I thank Chris for his hard work. New Plymouth loges faces beach, gave me the time to relax and mused about all the way I drove, chilly moment I had, all conversation I made. 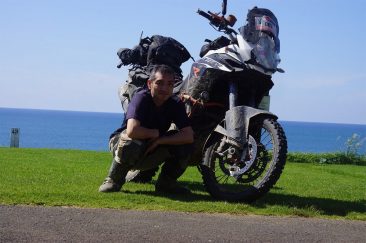 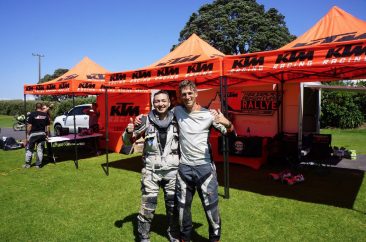 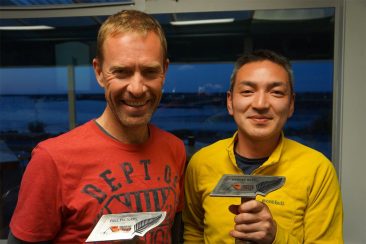 At the closing reception, I won “Monkey butt” award due to the fact that I came all the way from Japan with my R. I took a picture with Victor who won “Full Factory” award, and hope one day I improve my riding skill to win “Full Factory” award. Riders gave a pat on the back for the achievement each other and promised to join the rally again next year.

Overall, 1st KTM Rally in New Zealand is fantastic. I could not become happier. I appreciate very much the kindness from all participants, KTM officials, and the Kiwi. I also hope that my R finally enjoyed the riding what it was designed for – long and high speed adventure riding, which I could not offer to her in Japan. I joined once, so why not twice? Well, what happen twice will happen three times. Then it will become every year events.

Or maybe next one will be the Rally in Australia! 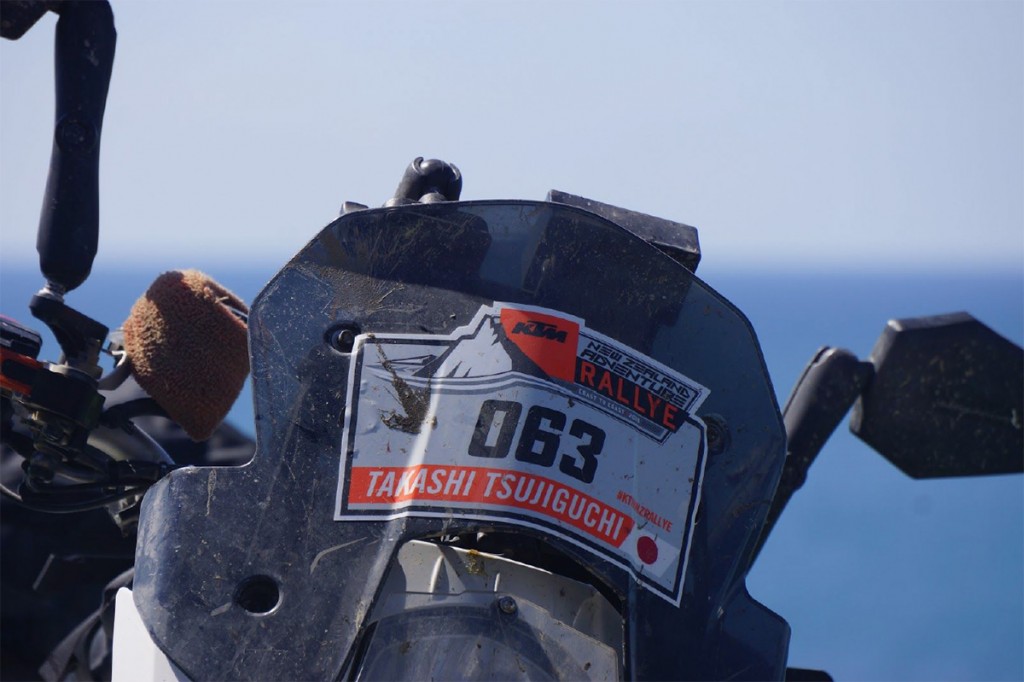