Ricky Kulpinski was unique amongst the other 121 Orange Adventure Riders who attended the 2016 KTM Australia Adventure Rallye.  He was the only one to tackle the inaugural epic five-day event in the Snowy High Country aboard the ultimate luxury adventure bike – a 1290 Super Adventure.  And for those eagle-eyed readers who jump up and say “We saw two others out there too!”  . . . we had another them along for staff bikes, and they were ridden by none other than multi-Australian National Championship racers Ben Grabham and Angus Reekie. So they don’t count.

Ricky and his 1290 Super Adventure show that no matter what is thrown their way, they are ready for the adventure.

After test riding the new 1290 Super Adventure in July 2015, I just had to have one. Having previously owned a 1190 Adventure R the 1290SA was a perfect follow up bike for adventure touring. Being based on the Sunshine Coast and working away on rotational basis, I take every opportunity I can to take the bike for a ride. The handling, power, versatility and comfort of this adventure tourer is second to none, and for two-up it’s great.

My First Long Trip
My first long distance ride on the big Kato was 1000kms from Brisbane to Mackay in North Queensland for a wedding. The trip from Brisbane to Mackay was completed with my teenage daughter as a pillion and you think younger adults might struggle with the discomfort of riding and the “are we there yet”?  She was very relaxed and enjoyed each averaged 200km leg thoroughly, in comfort. The return leg I had my 10 year old son as pillion and despite my thoughts he may be more of a challenge, he quite easily did 250km legs without complaint and loved listening to some music whilst enjoying the scenery.

The Snowies Trip
As soon as I got the notice about the inaugural 2016 KTM Adventure Rallye, I knew I had to go. I booked that same day and luckily I did because spaces filled pretty quickly. I attended the KTM rider training series held in Brisbane and got some invaluable tips from Chris Birch and Nick Selleck.

As the day approached to head off I prepared myself for ten solid days of riding, starting in Brisbane. The ride down took two days with the first leg to Bathurst seeing me travel 1050kms for an overnighter, then an early morning ride up to Mt Panorama. The second leg into Jindabyne was a lazy 475kms, pulling in to see the orange army of all shapes, sizes and models, what a great site. Had a quick look around and a shoe change from road to dirt by Rob and Annja (who happen to be my local Sunny Coast tyre people), and I was ready for the first day of the adventure.

The next five days was an epic adventure with a number of saves and close calls, mostly on the first day due to the loose stuff. It was extremely hard to maintain traction with every twist of the throttle seeing the 160hp spin up the rear wheel on the marbles.  My favourite day of riding was day two from Omeo into Dargo. A great relaxing morning moving through the cool forests where we’d had a bit of rain which hardened everything up and gave a bit more grip. Then came the last 40kms of day two including a pretty challenging hill climb and reasonable descent full of plenty of loose rocks making staying upright a challenge. For a moment I thought I’d taken a wrong turn and ended up on the breakout route. The 1290 was steady as a rock as it climbed over the hill and didn’t let me down (or drop me).

The final ride into Jindabyne was great for a couple of cold beers, a chat and some great stories, then off at 4:00am the next day for the trip home.

The trip home had me on a detour to visit relatives for a night so over to Central Victoria on a 600kms stretch through more great mountains and via Alpine Way. After already being on the road for eight days I was surprised I wasn’t more fatigued but that is how comfortable this bike is. Day nine from central Victoria and onto Narrabri overnight, putting another 1050kms on the clock, then up again at 4:00am for departure. Final day of riding took me through the Toowoomba ranges and some early morning close calls with some Skippy’s but a relatively relaxing 600kms.

The scenery of the Snowies was the perfect back drop for the first annual KTM Adventure Rallye and is definitely on my revisit list. All up around another 6000kms on the 1290 over 10 days through some beautiful parts of Australia. From the red dirt of New South Wales to the Snowy Highlands and Central Victorian bush, the KTM 1290 proved itself an accomplished tourer and a pleasure to ride.

I love the comfort and features of this bike and also the thrill it provides offroad. It is extremely forgiving and well balanced and when on the tarmac it feels more like a sports bike. I’m not sure where my next adventure will take me but I’m thinking of Western Queensland then onto North Queensland to the Cape. Wherever I go I know that this bike will be able to get me there. See you on the road and safe riding! 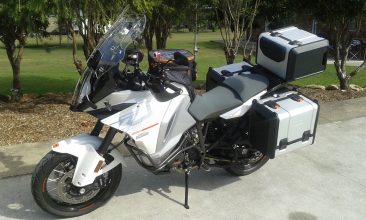 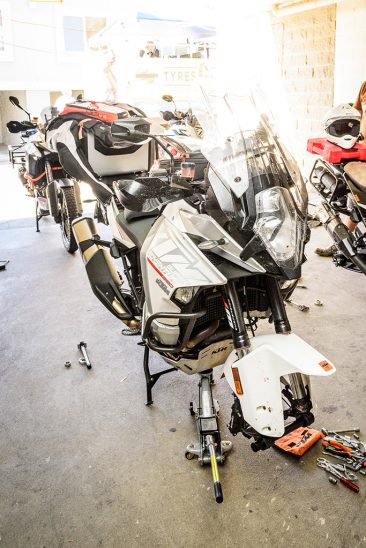 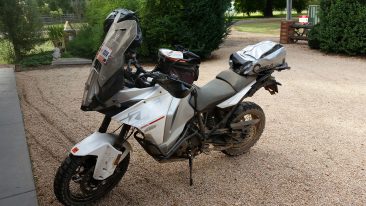