Why do the Transmoto Iron Man Races? This one question results in many more questions that Kye Anderson answers for us.

Why do the Transmoto iron man races? This question alone generates many more questions . . .

The list goes on and on, my answer is another question . . . why not?

Why can’t one person beat a four-man team for 6hrs,8hrs or 12hrs straight? Maybe I am crazy or maybe I just enjoy locking myself in the hurt locker and throwing away the key for a day until it is all over just to feel that euphoria and relief that fills me as I see that chequered flag similar to a triathlete finishing a triathalon.

I mean it did does sound a little crazy to me when I write it down on paper but in my mind I can see the rationality in it for some reason.

To complete a challenge that you set for yourself, that’s why. I don’t do it for anyone or anything else. You couldn’t pay me enough money to torture myself preparing for these races let alone the agony I go through during the race and the month following as my body struggles to come to terms with what it’s just been put through.

Following suit my 2018 Transmoto IronMan season had its own challenges to say the least. 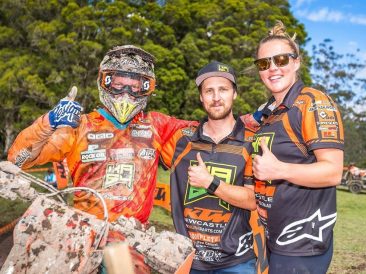 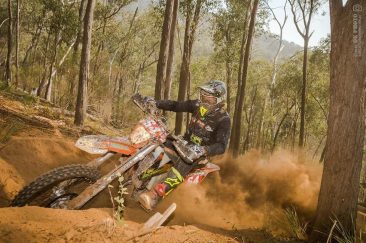 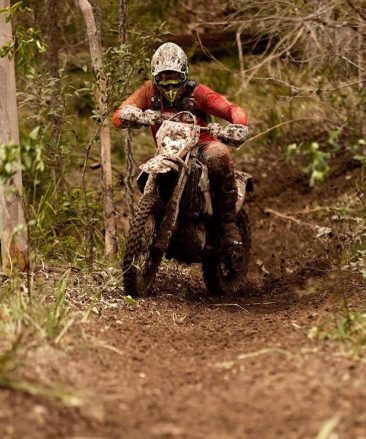 Two weeks prior to my 2018 debut at the Transmoto 12hr after all of my pre-season preparation had gone flawlessly it all came unraveled. I had been testing new suspension in my 350 EXC-F when I had a heavy crash with a tree, damaging the bike substantially along with myself. Immediately I thought all my hard work had just gone up in smoke as I laid on the ground by myself in the middle of Cowarra State Forest with blood coming out of my face and both my wrists feeling as if they had been to war.

Determined not to waste months of preparation or miss an opportunity to race for a good result in front of industry stalwarts I dodged the doctors and X-Ray machines and arrived at the 12hr under the weather but arrived none the less.

Race day was a hot one for sure and really made me appreciate all my efforts pre-season getting into shape.

For the 12hr I figure I’ve got 6-7hrs of joy while the track stays in good condition and my body doesn’t hurt too much but anything after that is pain and bike management as it is so easy to make a mistake in the last 4-5hrs as your body is ailing.

Fortunately, conditions played into my hands and I gelled with the track straight away and got in my groove and kept my lap times in the same minute from the start through to the finish for my 3rd consecutive 12hr title along with 18th outright against the teams.

Visiting the doctors once I returned home I was informed that I had ligament damage and rotated my scaphoid bone in my left wrist from my crash prior to the event, something unbeknownst to me that would cost me for the remainder of my season.

Bright was a new venue for the 2018 calendar nestled down in the Victorian high country where it is widely regarded as an adventurer enthusiast’s heaven.

It was clear on arrival that conditions were going to be very trying as it did not look like it had rained in the last ten years!

In addition to being unsure as to how my wrist was going to withhold 8hrs of torture I also had no mechanic for the race. So I really was going to have to be an “ironman” as I normally have a team of two supporting me through a race day but for Bright it was all on me!

My race began on the right foot on the very technical track taking the lead from the beginning and running 3rd outright against the teams for the first half of the race. But the inevitable happened, my left wrist blew up so badly I had to remove my heart rate monitor from my arm and was forced to sacrifice the lead as I limped around for the remainder of the race. This downfall would break my clean streak of wins giving me a second place result.

After missing some of the other Transmoto races due to racing in Europe I was keen to finish off the year with a good result without any troubles.

Fresh off the plane and jet-lagged from racing in Turkey for Sea to Sky we arrived in Stroud to which had had a substantial amount of rain to say the least with more forecasted overnight. Conditions which I enjoy and can be very strong in, especially now that my wrist has been getting filled up with cortisone injections since the 8hr in Bright helping it hold together…. just.

This was one of those races where everything just seems to fall into place, I rode clean and smart for the entirety of the race avoiding the bog holes that were swallowing up unsuspecting riders making their way around the battered course.

Unrivalled I lead from start to finish giving me my 8th Transmoto win from ten starts and a nice feeling to finish my season off on a high in front of the people who support my racing efforts.

Now it is the off season and I can let my wrist recover and get it fixed properly so that I can go again for 2019 as preparation begins right after the xmas/new year’s break.

Stay tuned for how I go about preparing for the toughest races in Australia and around the world.