The 2018 Dakar Rally came to a close on Saturday with the Red Bull KTM Factory Racing Team celebrating two of their riders on the podium. Matthias Walkner was crowned Dakar Champion, the first Austrian ever to win the motorcycle class, while Toby Price rounded out the podium in third following a superb performance throughout the rally.

The 40th edition of the Dakar Rally has proven to be one of the toughest since the event was first held in South America in 2009. Contested over 9,000km of treacherous terrain through the three countries of Peru, Bolivia and Argentina, the race has been filled with drama. Many top riders were forced to retire along the way, including last year’s winner Sam Sunderland.

Runner up to Sunderland at last year’s event Matthias Walkner rode an almost faultless 2018 Dakar Rally. Never phased by the difficulty of the stages or the adverse weather conditions, Walkner rode each stage with one goal in mind – to win the rally.

Walkner’s Dakar was nearly over before it started – a scary moment with the local traffic on the opening day nearly took the former Cross-Country Rallies World Champion off his bike. The results could have been disastrous. Despite the scare Walkner continued, riding each stage aiming to keep to a steady pace whilst not making any huge errors in the way of crashes or navigation.

At the end of the rally, Walkner had only one stage win to his name, but his consistency throughout the event took the Austrian to the top of the rankings from stage 10, and that is where he stayed. After two weeks of racing and over 43 hours of timed specials clocked, Matthias crossed the line as the 2018 Dakar Champion.

Matthias Walkner: “It has been an amazing Dakar for me. I still can’t believe that I managed to do it in the end. The rally has gone really well, even when I didn’t quite get the results I was hoping for, I kept my head down and concentrated on the finish, not just each individual stage. Good navigation and staying focused won the rally for me – that and the backing of my team who have been there the whole way with me. It’s nice to be able to reward them with this win. After my injury of 2016, to be able to stand here as a Dakar Champion is a dream come true.” 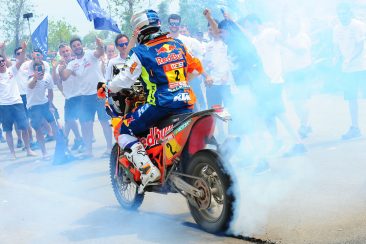 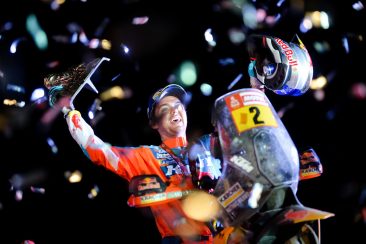 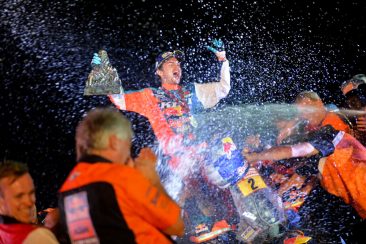 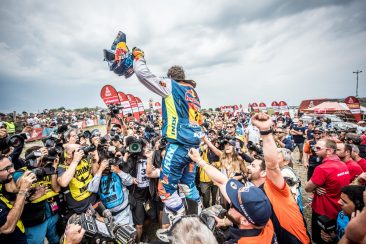 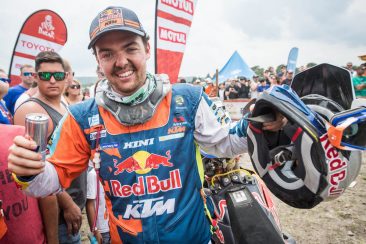 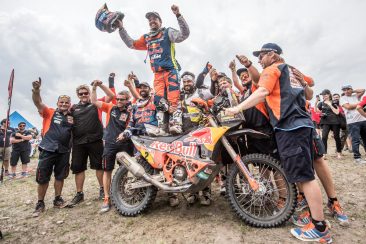 2016 Dakar winner Toby Price came into the event this year simply hoping to complete the rally. This time last year, Price was lying in a hospital bed with a broken femur sustained on stage four of the 2017 event. The injury plagued Price for the entirety of the 2017 season and right until the last minute the Australian’s participation in the 2018 Dakar was in doubt.

Price started the rally taking a great deal of care. Aiming to finish each stage and take each day as it came, he had mixed results on the first half of the event. Following the rest day, Price made a concerted effort to push. His results improved dramatically. Always near the top of the rankings, including two stage wins, Price was in the hunt for the win.

Unfortunately, when running at the front on stage 10 a navigation error made by the leading group of riders took Price way off course. The result was 30 minutes lost and the chance of a second Dakar title realistically disappeared. Despite the set-back, Toby continued pushing on, his final result was third overall, just minutes from the runner-up position.

Toby Price: “Overall, I am really pumped to have gotten to the finish line and come away with third position. I certainly didn’t expect to place this high up on my first Dakar back from injury. I have to be a little disappointed, that stage 10 not only cost me time but knocked my confidence a bit. All I could do from there was to keep pushing and sat here at the finish in third place just goes to show you should never give up. I certainly couldn’t have done it this year without the team behind me – the Red Bull KTM crew have all been amazing along with the new bike, too. I’m happy that I can walk away from this year’s event fit and healthy, with a good result under my belt and hopefully come back even stronger next year.”

Antoine Meo’s Dakar story mirrors that of his team-mate Price. A 2017 dogged with injury also put a doubt on the Frenchman’s entry into the Dakar. Overcoming his lack of time on the bike and not being 100% fit, Meo also put in a superb performance over the course of the rally. Starting off steadily, Meo’s pace slowly increased throughout the event with the Frenchman eventually winning two stages and fighting for the final podium at the end.

The 2010 World Enduro Champion, in only his second attempt at the Dakar, placed fourth at the finish after battling with his team-mate Price for much of the race. On reflection, Antoine was extremely happy with his result.

Antoine Meo: “I’m really happy. I honestly didn’t think at the beginning of the rally that I would be able to take fourth position at the end. Coming from injury, I have not had as much time on the bike leading up to the event as I would have liked and if there is one race on the calendar you need to prepare for it’s the Dakar. Obviously, stage 10 cost us a lot of time and the cancelled stages meant our plans didn’t exactly pan out. But I am here at the end of the rally in one piece. Now I will go home and start looking at the 2018 season, hopefully I can get some good results there and come back to the Dakar next year a lot stronger.”

Laia Sanz is an inspiration at the Dakar Rally. The Spaniard contested her eighth Dakar in a row in 2018 and continued her 100% finishers record. Going into this year’s event, Sanz was realistic about her chances and her main goal was to get to the end of the race successfully. Hesitantly aiming for a top-15 position Sanz was well aware of the quality of the field riding this year. 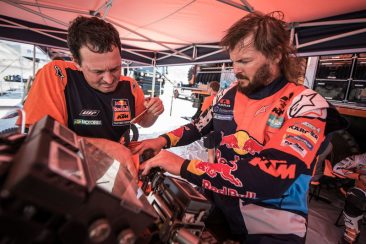 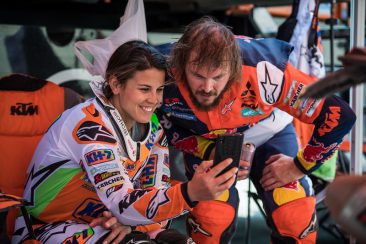 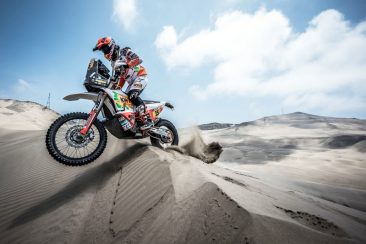 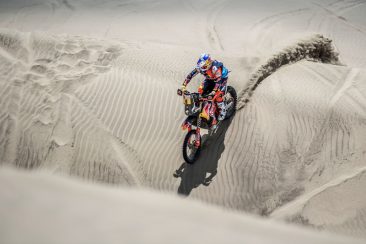 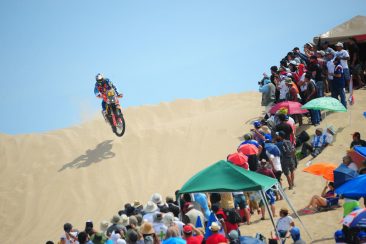 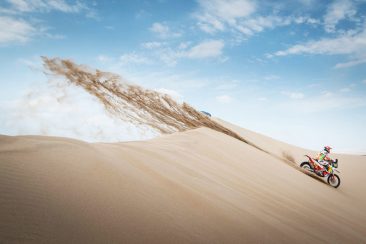 With the new KTM 450 RALLY suiting her incredibly well Laia rode an almost perfect race. Handling with ease the soft dunes of Peru, the extreme conditions of Bolivia and the fast hard-packed tracks of Argentina, a couple of high-speed crashes didn’t dampen the Spaniard’s spirits.

Through consistency, hard work and out-and-out speed, Laia eventually placed 12th overall, well within her initial goal. The ‘Queen of the Desert’ will be back next year for more.

Laia Sanz: “I am so happy, I wanted to get into the top-15 so to place 12th is even better than I dreamed of. I’m really proud of my result especially in a rally with such a high level of competitors. The new KTM 450 RALLY has really helped me achieve this result – I feel like I have taken a big step forward in riding and speed. My pace throughout the rally has been very consistent and I am happy with my navigation too, I can really make up some time there. The crashes put me back a little, I was so exhausted and following the trucks makes the tracks very difficult. I managed to put the pain to the back of my mind and got to the finish in Córdoba. I am so happy for Matthias with his win and it shows how strong we are as a team. I am now looking forward to next year and hope to do just as well.”

The organisers promised that the 2018 Dakar Rally would be one of the most demanding. Two of the KTM factory riders were unfortunately forced to retire during the course of the event. Last year’s winner Sam Sunderland enjoyed a storming start to the 2018 event. Sunderland won two of the first three stages and was looking good for a top result. But a hard landing from one of the Peruvian dunes put an end to his title hopes – although the Brit didn’t come off his bike, the landing compressed vertebrae in his back and the former champion had no option than to stop.

Luciano Benavides, contesting his first ever Dakar Rally, was also forced to retire from the event after a nasty crash on the infamous stage 10 resulted in back injuries for the young Argentinian. Benavides was flown to the local hospital where the rider was diagnosed with three broken vertebrae. Luciano is already on the mend and will be back on a bike later this season.

With the 2018 Dakar Rally at a close and the team already making their way back home, it won’t be long before the start of the FIM Cross-Country Rallies World Championship kicks off in Abu Dhabi in March. Following the climax of the six-round championship at the Rally du Maroc in October the Red Bull KTM Factory Racing Team will have just one thing on their minds – the Dakar Rally 2019. 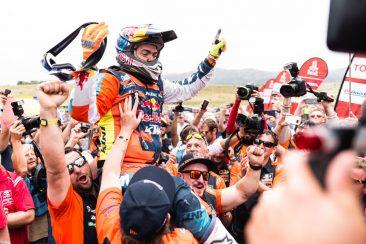 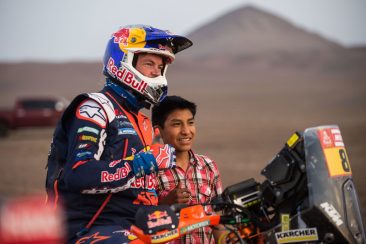 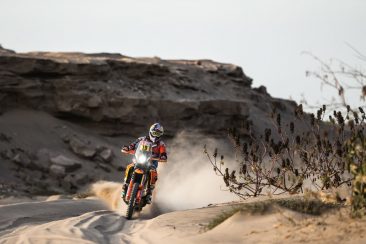 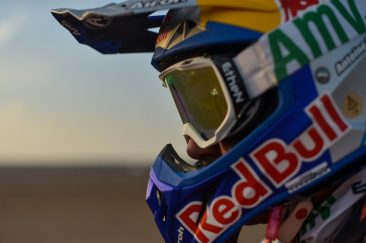 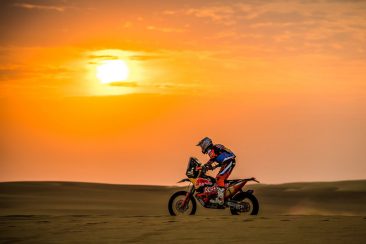 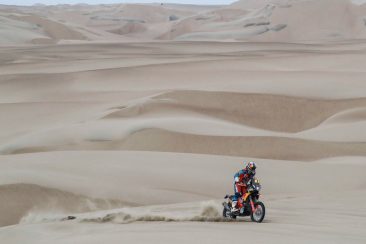