It’s 11 am in the Red Centre of Australia, where thousands of campers wipe the dust out of their tired eyes, kicked up by the morning run of trophy trucks and buggies, making their first pass down the 229-kilometre track to Finke, a rural indigenous town, south of Alice Springs in the Northern Territory. The air is still, as the last of the helicopters fly overhead to ensure the track is clear for the next wave of competitors to pass through. The anticipation builds among the many pit crews waiting at predetermined fuel stops trackside, to see their riders come into sight.

Back in Alice Springs at the motorsport complex, hundred’s of riders gear up before pushing their motorcycles to the start line of the 2019 FINKE Desert Race. A bucket list event for many, but a way of life for a few. A race like no other and one – if it isn’t already on there – that should be on your bucket list too. Whether spectating or taking part, it really is an event that needs to be seen in real life to understand the sheer ruggedness of the terrain and toughness of rider and machine. 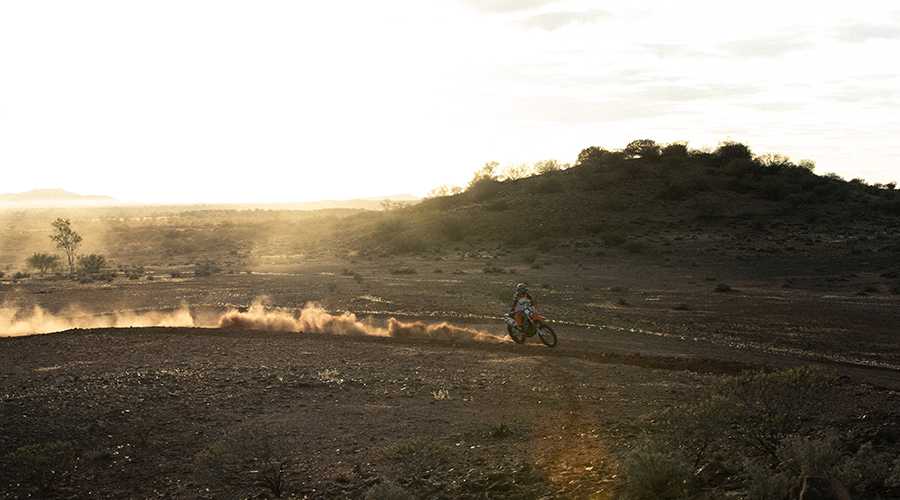 Reigning Finke Desert Race Champion, North Star Pastoral KTM Desert Racing Team rider David Walsh, is one of those riders whose way of life has revolved around the great race for so many years. After year’s of trying and coming close, the Alice Springs local took the race win in 2019 aboard his KTM 500 EXC-F. Backed by a team of over 30 helpers, consisting of KTM Desert Race Team mechanics, KTM staff members on all of the vital pit stops, family, friends and team sponsors. Walsh dominated the 2019 event from the minute he took off in Prologue, setting a blistering pace finishing 5.2 seconds ahead of second place.

“Finke means a lot to me. The race is a massive thing, it’s bigger than Christmas for a lot of people in Alice Springs.” – David Walsh

The race is run along sections of what was the Old Ghan Railway service track adjacent to the railway line along a winding corrugated track, which snakes through typical outback terrain of red dirt, sand, spinifex, mulga and desert oaks. The run down to Finke is what many riders see as the pivotal part of the race, asserting a lead or simply catching back up on any time lost in Prologue. Walsh was again eager to stretch a lead over the rest of the 530 bikes looking to track him down in the treacherous desert dust. With only clean air in front of him, Walshy stretched the legs on his KTM 500 EXC-F crossing the dried up Finke River – believed to be the oldest river in the world – and the end of day 1, five minutes ahead of second place, Schwartz Motorsports, Husqvarna FE 501 mounted Jacob Smith. 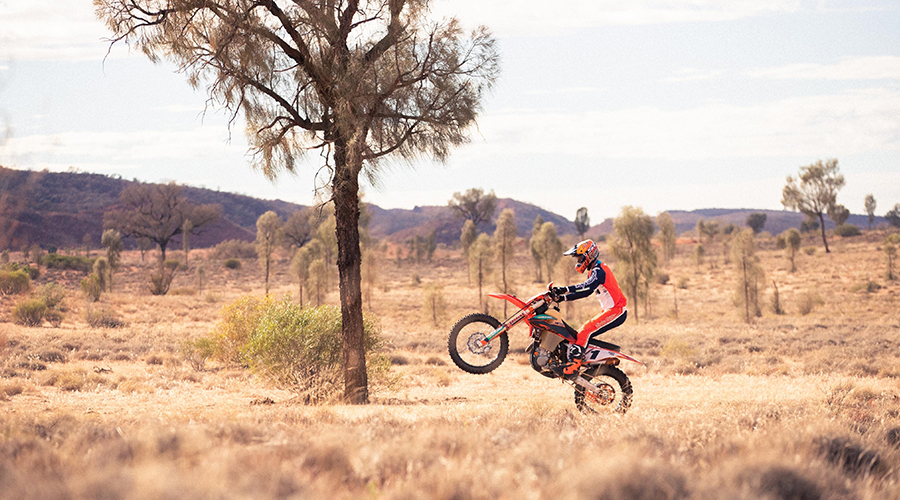 Having been in this same position in 2017 – when unfortunately a failure forced a premature exit from the race while leading 5 minutes out of Finke – David knew he couldn’t rest on his laurels. He kept his head down and with a substantial lead at the last pit stop, he ensured he could get his KTM 500 EXC-F back to the stadium where his team, family, friends and what felt like the whole of Alice Springs were waiting in anticipation. Walshy crossed the line with a total time of 04:01:00.4s, four minutes ahead of second place, Jacob Smith who had clawed back one minute on Walsh on the return trip. The home town boy had done it! David Walsh was the 2019 Finke Champion. 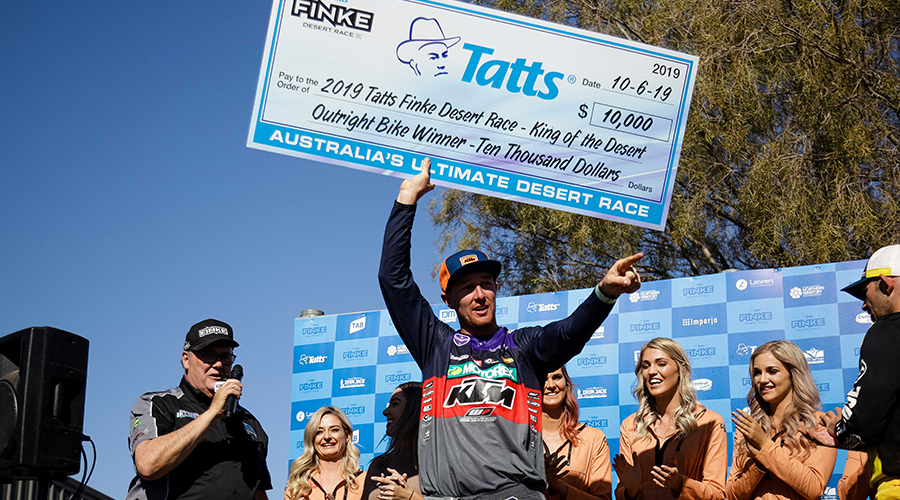 Once the dust settled and the victory celebrations had mellowed, discussions began for Walsh to defend his title in 2020. Shortly after some discussion with his family, the decision was made to take on the great race once again with this KTM 500 EXC-F and preparations began.

Unfortunately, due to the global pandemic, Walsh was unable to defend his title in 2020 as the race was cancelled for the first time in the history of the event. See what David “Walshy” Walsh had to say as he reflected on Finke 2020 and what the race means to the local lad from Alice Springs.