How do you make class leading suspension better? You own a suspension company!

I feel confident in saying the new KTM 790 Adventure R has the best suspension of any bike on the adventure market for handling tough Aussie off-road conditions. I consider the whole bike package a game changer. Fantastic adjustability and bottoming resistance make it a delight to ride off-road.

But, you know what? It’s funny what you get used to. And I only say that because I’ve since experienced better. Riding the 790 Adventure R fitted with upgraded WP Xplor Pro suspension is proof of this. As good as the stock suspension is, the WP Xplor Pro gear is next level!

Read on to find out why.

Many years ago KTM acquired the company WP who manufacture many motorcycle components including suspension, frames, radiators and exhausts. In those years they’ve figured out how to make springy things go up and down in a very controlled fashion.

To give these components their true name: WP Xplor Pro 7548 Fork and WP Xplor Pro 6746 Shock Absorber. The fork fits a few other KTM Enduro models but the shock is unique to the 790 R.

A note that the standard supplied springs are the correct rating for a rider weight of between 75-85kg. Luckily, I fit right in that sweet spot so I could achieve the correct sag settings. Alternate springs are available for different weight riders. 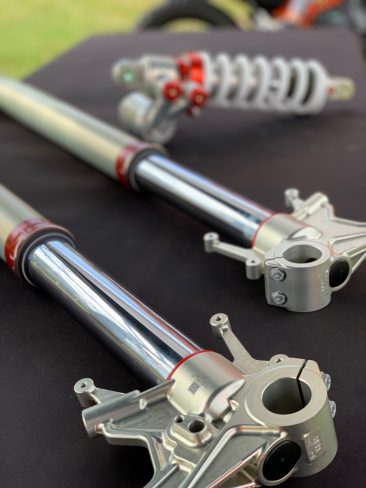 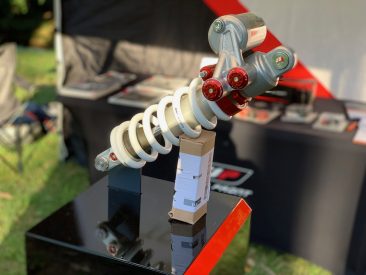 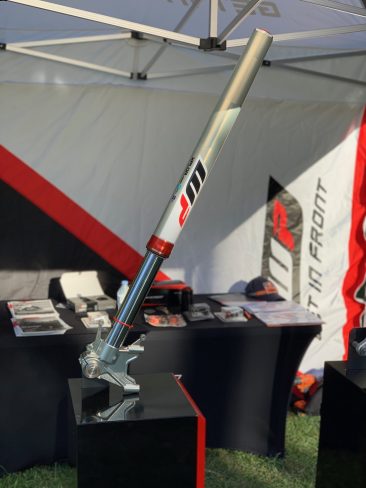 Let’s get this out of the way early on. You might have noticed above the retail pricing of this suspension totals up to $8,998 AUD. Near enough to nine grand! More than a third of the price of a new 790 R. Nine grand to replace suspension that is already deemed by many to be best in class. Why? Is it worth it? This is a question I’ve been asked many times already.

Now that you’ve cleaned the cornflakes off your computer screen let’s have a closer look at the riding performance of this WP package.

Now to get into the testing of it. I have had three good opportunities to test this suspension:

These three scenarios gave me a really good broad spread of terrain and situations to appreciate the suspenders.

So, if the stock suspension is so damn good why would KTM and WP go to all the trouble of offering a complete of replacement suspenders. Because the rest of the chassis is capable of making use of it would be one response I would give.

My summary would be it gives you more control, you can ride faster with greater safely and it’s more predictable. If there was one compelling reason for you to buy, I would say safety. Safety might sound weird as a reason, but this suspension just never puts a foot wrong and remains very predictable. So there, go and tell your wife you need to spend another $9k on your new 790 for safety reasons!

One particular jump on the dealer launch test loop was very telling for most of us. There was a nice kicker about 1 metre in height with an up ramp a little over a bike length and a nice long downhill landing area. Danny Wilkinson the photographer was set up here with his flash to grab the money shots and he certainly did! The first time I came around and hit this ramp I landed and thought “I can hit that harder”! I did a u-turn and hit it again. Same result! I hit it a 3rd time and the bike still had more to give! I could not believe how fast and hard you could hit this ramp and the bike soaked it up like no one’s business. 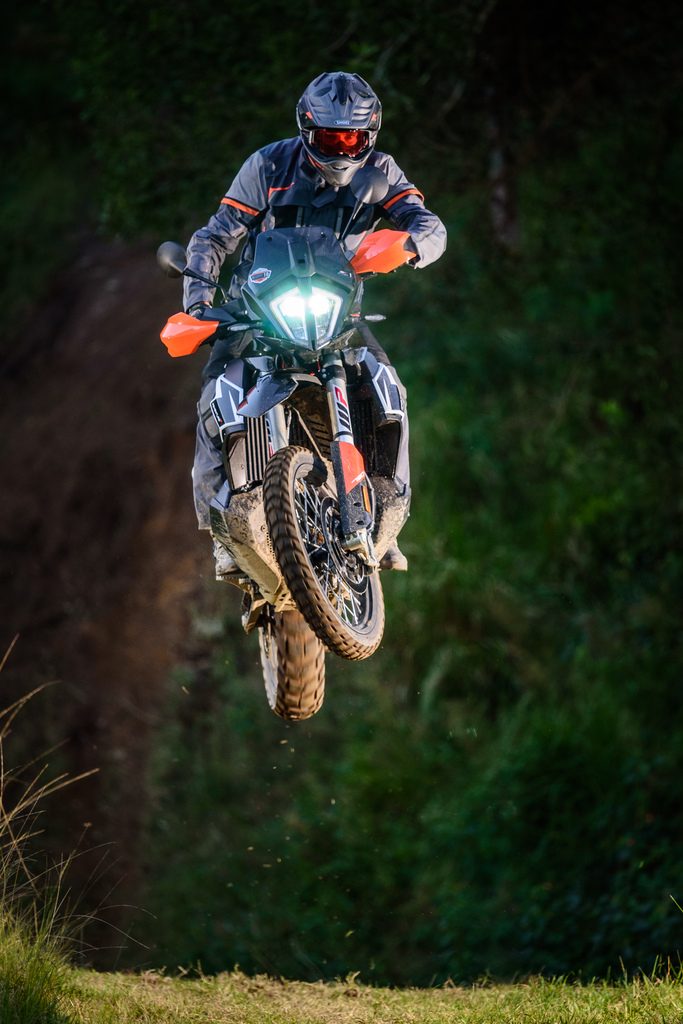 Across the weekend of the KTM Ultimate Race qualifier at Stroud I rode with Robbo who competed in the Merzouga Rally race in Morocco earlier in the year as a final competitor in the KTM Ultimate Race. While we were sweep riding at the Stroud event we were able to swap bikes back-to-back around a full on Transmoto Enduro race track full of single track ruts, rocks, braking & accelerating bumps and logs.

We named them “WP Pillows” after feeling the difference back-to-back.

Two key standouts from this experience:

These are the key differences in ride feel for me:

Don’t just take my word for it, this is what some other riders have said after riding the WP bike:

Of course, not every adventure rider wants to go boosting their circa 200kg bike into low orbit so how does it benefit the “average” rider?

I say, “Good suspension is good suspension everywhere”. By that I mean if you have good suspension under you made of quality components that are correctly set up for your weight and riding style then I believe that suspension can be dialed in to work really well in the diversity of riding conditions an adventure rider encounters.

To look at the suspension the difference to stock suspension is not immediately obvious, and to be honest that is disappointing. I reckon most people that are spending several thousand dollars on trick suspension would want a bit of obvious bling factor with anodised fork coatings visible or some different colour scheme.

A trained eye will notice the larger fork caps and extra high-speed compression damping adjuster on the shock but a casual observer walking past your bike may not pick up on it. And that is probably exactly what WP were going for – performance over looks.

This gear is built to work and not just hang off the bike for wank factor.

For me the biggest difference is in three key areas: 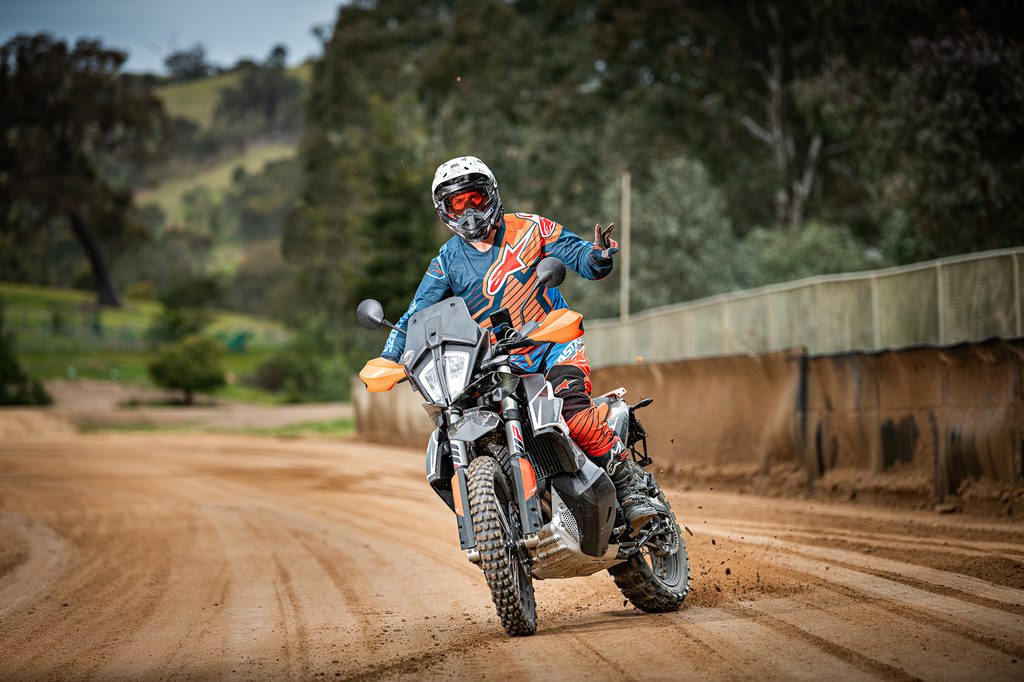 Have you not read a word above or looked at any pictures and just skipped straight to the summary?! Of course, you bloody need it!

I’ve been asked several times “Is it worth getting” or “Do I need it”?

My answer to that is “If you have the funds available and you love having the best gear then yes it’s absolutely worth getting”.

If on the other hand you aren’t flush with funds, then rest assured the stock 790 suspension is best in class. Can it be better? Yes!

If you are somewhere in between and need to get it past the ‘Minister For Finance & Domestic Affairs’ one approach you could take is to say it’s for “safety reasons”. This is more truthful than you might think because the number one biggest difference I noticed is the bike doesn’t deflect sideways off sharp edged bumps or rocks as much. At all actually!  You can hit things at pretty much any speed (within sane reason) and bike just soaks it up without getting messy.

One option to get a set of the good WP suspension on a 790 is you could try and be one of the lucky 500 people that secure an order on the yet to be released 790 Adventure R Rally. That special model comes tricked out with the good WP Xplor Pro gear straight out of the crate.

Interesting side note is the Rally model features 270mm travel from the ‘same’ suspension. The extra 30mm travel is achieved by changing some internal spacers apparently.

Otherwise if you’re not one of those lucky 500 Rally purchasers then get in touch with one of the WP Suspension authorised dealers – https://www.wp-suspension.com/en-us/authorized-centers/

The authorised dealers in Australia at time of writing include:

Go on, you know you need it! 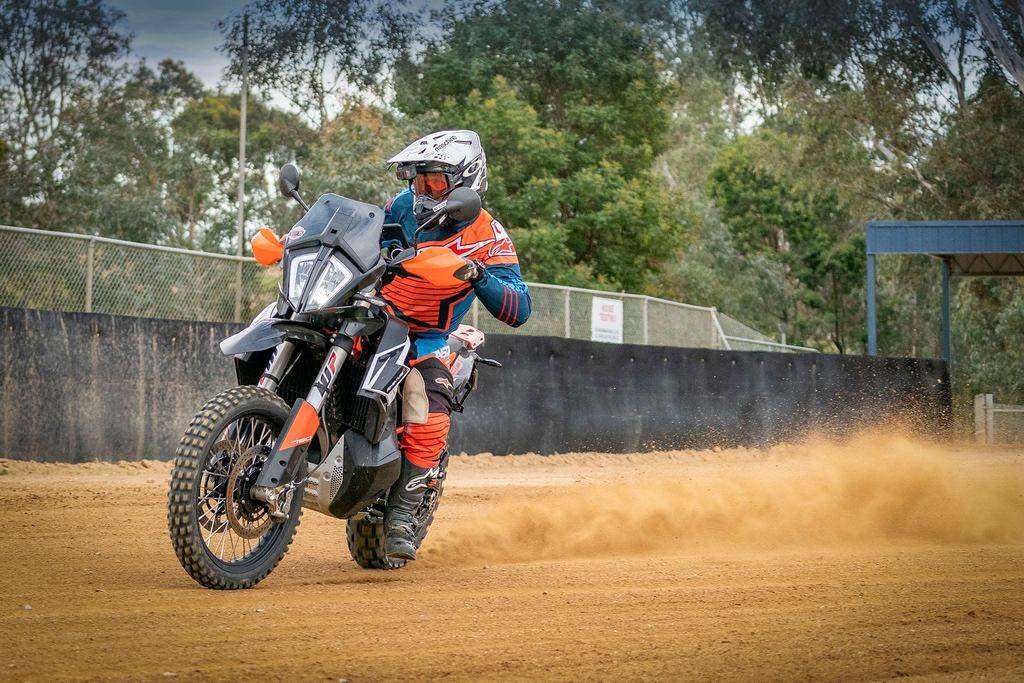