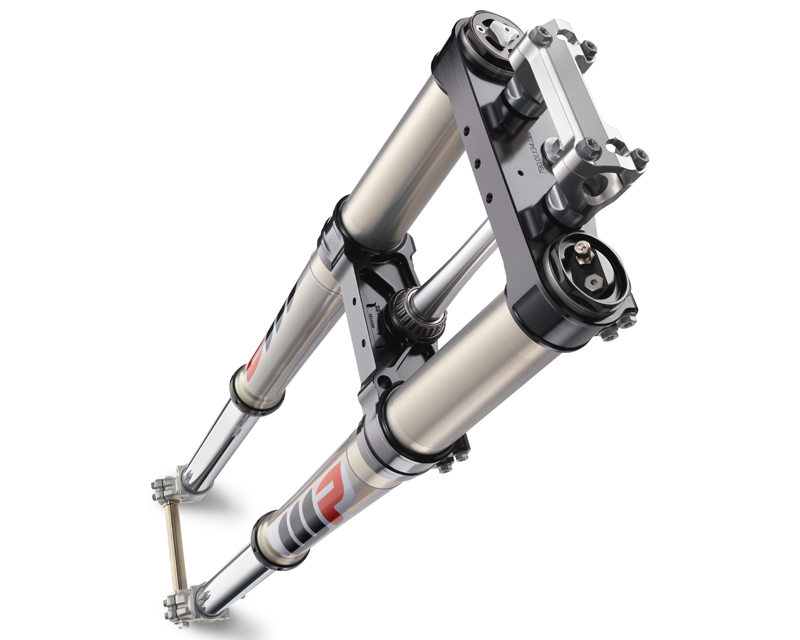 In response to lingering scepticism in some quarters about the performance and/or reliability of air-sprung forks, an independent media source teamed up with KTM recently put WP’s all-new 48mm ‘AER’ air fork through a rigorous test program. The aim? To address the 10 most commonly held assertions – and myths – about air forks, and then sort fact from fiction…

That depends on the fork’s design. If the fork relies on air pressure in an outer chamber (which puts pressure on the fork seal), then yes, it is possible for a damaged fork seal and/or chrome slider to lead to a partially or fully collapsed fork. The design used on WP’s AER air fork, however, means there’s never any pressure on the fork seals. In the AER fork, the pressured air is all contained in a sealed inner cartridge, with a bypass for the negative chamber that’s enacted at full fork-leg extension – when you go off a jump or sit the bike on a stand, for instance. In other words, if an AER fork does have a fork-seal leak, it will not lose any air pressure. If the AER fork’s internal cartridge were to fail, the pressure will equalise on either side of the piston and hold the fork halfway down in its compression stroke. 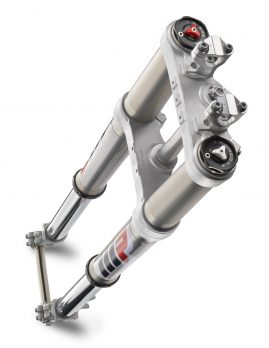 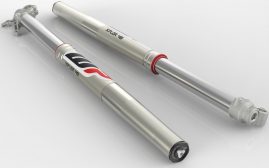 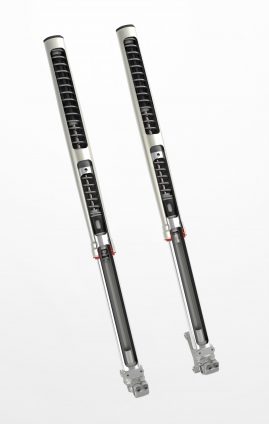 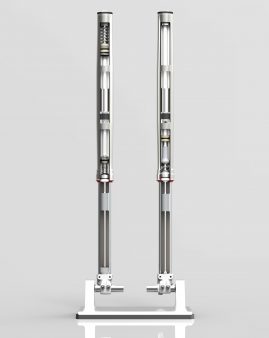 WP’s complete AER fork (including the brake calliper mount) weighs 7160g, compared with 8650g for WP’s new Xplor 48mm coil-sprung fork (which, itself, is between 300g and 600g lighter than its 4CS and open-cartridge predecessors, respectively). The significance of saving somewhere in the vicinity of 1.5kg depends who you’re speaking to. For elite race teams and Pro racers, that’s a huge saving that might otherwise cost them countless thousands of development dollars to achieve. Plus, at the high-performance end of the spectrum, saving unsprung weight is the Holy Grail. On the other hand, for an adventurous trailrider whose bike runs an oversize fuel tank and massive bashplate, saving a kilo or two is neither here nor there.

True, particularly when the fork has multiple chambers (such as Showa’s SFF TAC air fork) whose pressures each need to be checked. So, bearing this in mind, WP’s AER fork was intentionally designed with simplicity of adjustment as a primary goal. It only has one air chamber (in one fork leg). As Transmoto surmised after their 2015 450cc MX Bike Shootout (when the Honda, Kawasaki and Suzuki all arrived with all-new air forks), “Adjustability is a great thing, but only if users understand how each of those adjustments – made in isolation, and in conjunction with each other – will affect the suspension’s ride. Air suspension is here to stay, but if riders and technicians want to stop chasing their tails, it’s inevitable that the manufacturers dumb down the adjustment options in the years to come.”

WP’s design team appears to have been paying attention to consumer feedback about the earlier air fork designs for dirt bikes, and produced a much more user-friendly fork in response. 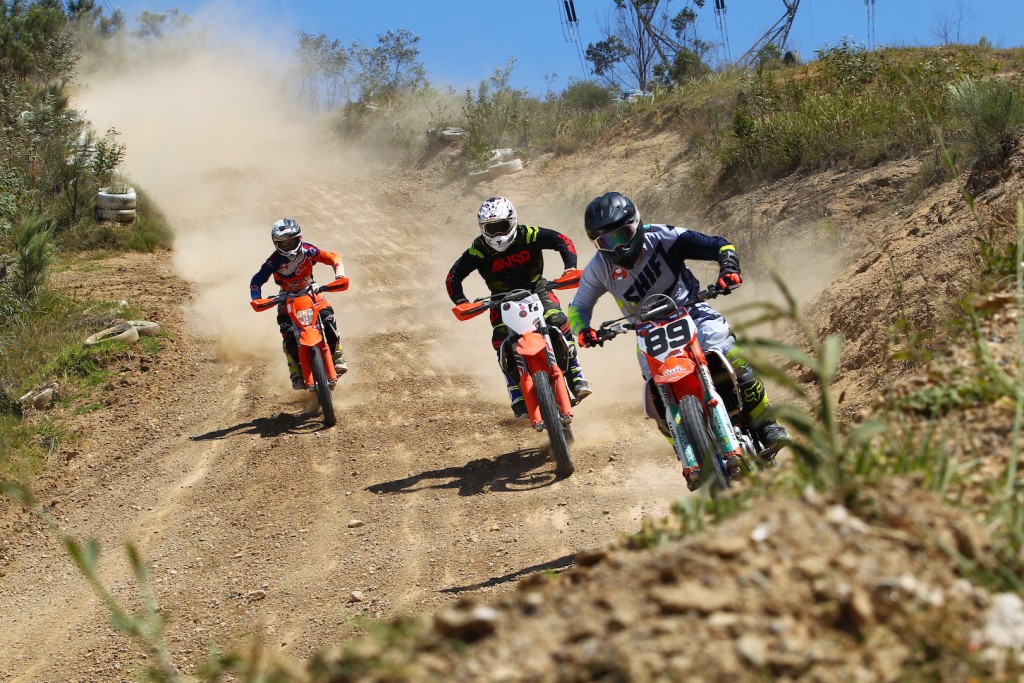 Not so with WP’s AER fork. Rather than do what’s required with conventional forks (that is, bottom the fork out and then carefully measure oil heights), all you need to know with the AER is that there’s 200ml of oil in each leg. Pus the oil contained within the WP air fork’s outer chamber is purely for lubrication. In other words, you no longer have to change the oil height (and air volume, as a result) to generate better bottoming resistance. The air chamber is already there in the fork’s design (which is adjustable), and air offers incredibly progressive resistance. It’s a simple but effective design, whose performance and adjustability has been very well received in Europe for the past year (remember that the KTM MX models sold in Europe have run the WP AER air fork for 12 months now).

Well, a $10 bicycle pump can be used to pump up any dirt bike air fork. But if you want to accurately check air pressures and minimise pressure loss when you fit and remove the pump, then the investment in a quality pump is money well spent. The KTM models that run this WP AER fork all come with a quality WP pump in their parts kit. It’s specifically designed with a long thread to make sure there’s minimal bleed-off when it’s being connected and disconnected. You simply need to ensure the front wheel is off the ground before you check or adjust the fork’s air pressure. And it’s critical you screw the pump’s fitting on fully. If you don’t, the readings can be way out of whack. Conveniently, the Schrader valve in the AER’s LHS fork cap is mounted at a 45-degree angle so the handlebars don’t get in the way of the pump. 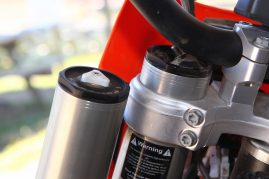 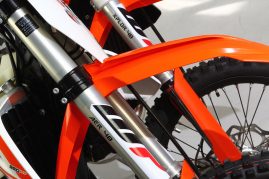 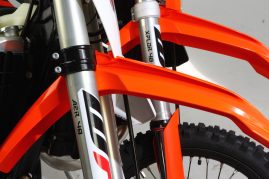 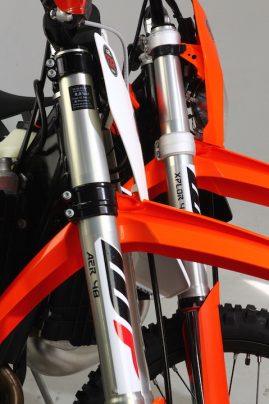 Modern-day air forks experience a negligible increase in air pressure, even when ridden hard in hot weather, and/or on tracks with large jumps and deep bumps. With the WP AER fork, most owners report that there’s a warm-up factor involved. In other words, once they’ve set their air pressure after an initial ride, it varies very little during a day’s riding. That mirrored what we found during our test sessions – both on trail and enduro loops and MX tracks.

A few reasons. First, these guys reckon they can make a buck out of it. Second, the market’s limited experience with air fork set-up means there’s limited data to draw on when the average rider is looking to get their air fork set up. And third, a majority of riders don’t like the idea that they should be checking the pressure(s) in their air fork before each ride, particularly when there are multiple chambers to deal with.

No one is entirely sure yet. But the general consensus is that, by saving more than 2kg elsewhere on their 2017 bike, Honda has figured they can afford to run the slightly heavier – but revered – Showa 49mm twin-cartridge fork. Plus, because air forks tend to polarise opinion, Honda seems to have erred on the side of caution. 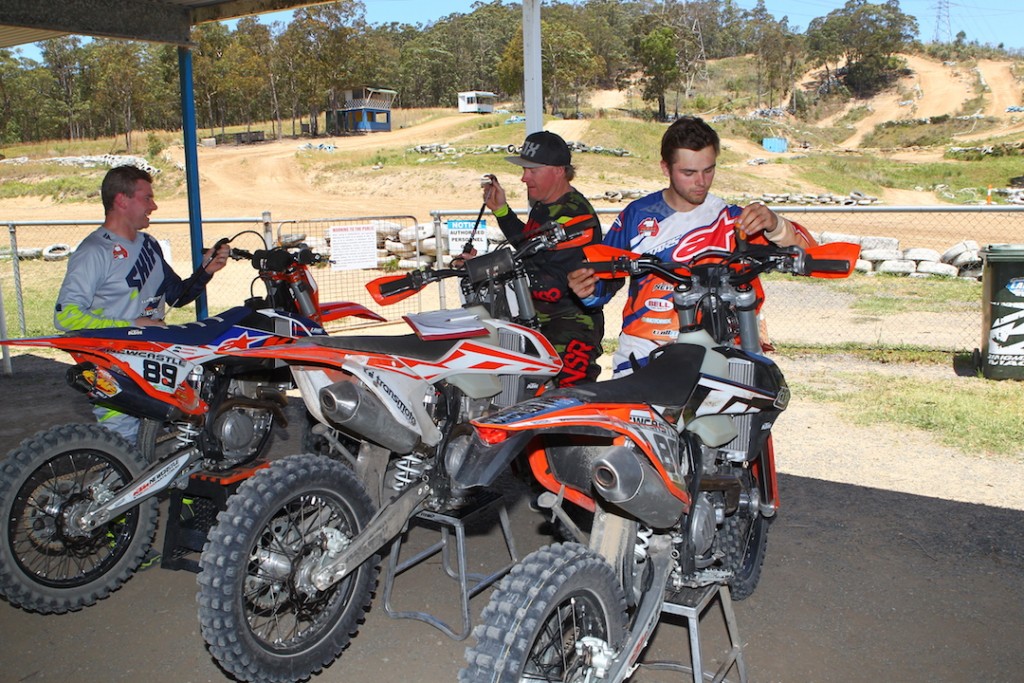 Well, some Pros do run air forks, and some don’t. In recent years, it’s fair to say that many have swapped back and forth between air- and coil-sprung forks. Suffice to say that the demands these Pro riders put on their forks is much greater than that of the average rider, which is why they all race on expensive, up-specced factory forks – whether sprung by air or coil. Consumer feedback in Europe for the past 12 months (where KTM’s 2016 year-model MX bikes have run WP’s AER fork) has been overwhelmingly positive – from both a performance and reliability point of view.

Several of KTM’s Pro riders have been testing WP’s AER fork in KTM’s enduro models, with encouraging results. But KTM’s market research suggests that trail and enduro riders are not yet ready for an air fork because they still value function over performance and adjustability. As KTM’s Product Manager, Joachim Sauer, said at the recent launch for KTM’s 2017 enduro range in Spain, “For trail, enduro, cross-country and desert racing applications, we believe it is still too early to consider an air fork. Consumers do not yet trust the reliability of air suspension when riding in remote terrain, and they do not want to have to carry a pump all day. I think we will need another three to five years for these perceptions to change, and to convince people that an air fork could be an advantage – aside from the weight reduction it offers.”

We’ll go out on a limb and say we believe KTM’s move to an air fork for its enduro models won’t take another five years.