For the inside line on KTM’s growth, reinvestment strategy, and aspirations to increase its share of the lucrative adventure bike market segment, we spoke with one of KTM HQ’s key sales personnel, Peter Perberschlager.

Peter Perberschlager is KTM’s Vice President of Sales for Asia-Pacific, Africa and Middle East markets; a shrewd, straight-talking, likeable Austrian who recently visited Australia for the Asia-Pacific launch for KTM’s new-generation Adventure models in the Blue Mountains. Keen for an insight into KTM’s plans, we plied Perberschlager with a few local ales and single-malt scotches and peppered him with questions about KTM’s record results, growth strategy, reinvestment into product, and aspirations to claim a larger share of the increasingly populated adventure bike market segment. 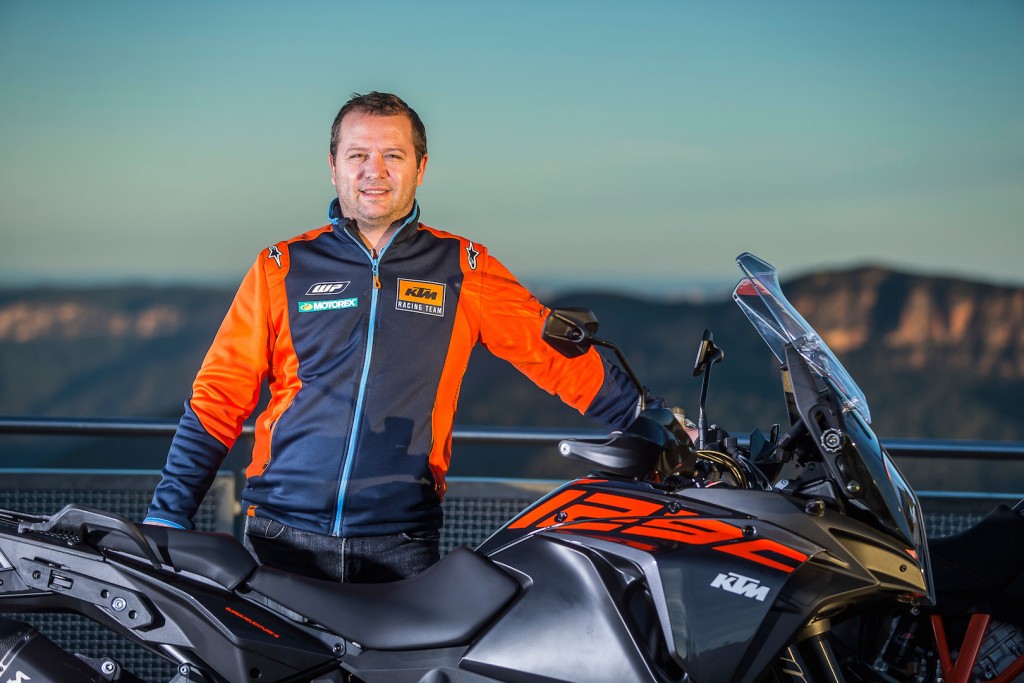 KTM’s growth and racing success has been phenomenal in recent years, and you’ve been around for all of it.

PP: Yes, I’ve been with KTM for almost 20 years now, during which time it has notched up some amazing successes. And the company has just recorded its sixth consecutive record year of growth. At KTM, there always seems to be a new challenge, which makes time fly by. The culture of the company is very team-oriented, passionate and focused around the core value of ‘Ready to Race’. We all have clear goals about the direction we want to head, but we are also given the freedom to get there without too many rules standing in the way. That makes it an enjoyable, rewarding place to work. I think KTM’s success – in both its product sales and its racing – is a direct reflection of that culture. Like motorsport, selling motorcycles is about doing all the little things right to find that fraction of advantage over your rivals. So for me, the ‘Ready to Race’ culture also applies to the Excel spreadsheets we use to track sales [laughs].

Speaking of which, KTM’s turnover was 1.1 billion Euros in 2016. That’s no small business.

That’s right. But more importantly, the company’s profit – the EBIT – was 102 million Euros. Relative to other European manufacturers, that is a very healthy number with good margins.

How do those numbers now position KTM against the other large European motorcycle manufacturers?

Well, if you look at the units sold, KTM is substantially bigger than BMW. If you include the Husqvarna models that are made in the KTM factory in Mattighofen, the group sold in excess of 200,000 units last year. Our goal is 300,000 units by 2021. From a turnover point of view, however, I believe BMW is still slightly ahead of the KTM/Husqvarna group at the moment.

Where do you think that projected 50% increase in sales primarily come from in the next four years?

From a group point of view, we believe the growth will come primarily from Husqvarna, which currently sells a little over 30,000 units worldwide. Having Husqvarna as part of the group also allows us to enlarge the product range into areas that might not fit KTM’s Ready to Race mantra. Another key driver for growth is an investment into the dealer network. At the end of the day, a brand is a promise of what you will give the customer, and that promise is delivered to the customer at the dealer. We have many outstanding dealers around the world, but with KTM’s product growth in the adventure bike market, for instance, there is room for improvement. That means broadening dealers’ product knowledge, technical training and improving the point-of-sale experience. From a regional perspective, there is a great deal of potential in India and Asia. We also expect to see big growth from our naked bikes – the new 390 Duke to the 1290 Super Duke R to the 790 Super Duke (that will be launched by early next year) – and our new Adventure models. Our new 790cc engine platform may well inspire all-new models in other segments as well. But to continue to grow, it is also very important we consult our partners and understand the needs of their particular markets.

“At the end of the day, a brand is a promise of what you will give the customer, and that promise is delivered to the customer at the dealer.”

And your partners in Australia are now your third largest distributor worldwide, right?

Yes. Our Australian partners handle both the Australian and New Zealand markets, which is collectively the third biggest worldwide market for KTM and Husqvarna. If you were to include the emerging market of India – where we mainly sell the KTM products made there – Australia and New Zealand would be fourth.

We are lucky to have such experienced partners here in Australia because the feedback we get about the new machines has always been very honest and very specific. That helps our R&D department and product development teams determine what is and isn’t needed. It’s interesting that the Australian and European markets are so different when it comes to what they want from their adventure machines. In Europe, the demand is 80/20 in favour of road. But in Australia, it’s 80/20 or even 90/10 in favour of products that are much more capable off-road. So we are happy that the guys here push us to develop the bikes’ off-road capabilities, and I think our two new R models for 2017 reflect that. The suspension upgrades found on the new 1090R and 1290R, for example, are very much driven by markets such as Australia, South Africa and the USA. In Australia, you guys like to ride our Adventure bikes as if they are EXC enduro models [laughs], and my initial feeling from talking to the Australian media and KTM dealers is that our new 1090R and 1290R models will be very well received here.

In Australia, you guys like to ride our Adventure bikes as if they are EXC enduro models [laughs], and my initial feeling from talking to the Australian media and KTM dealers is that our new 1090R and 1290R models will be very well received here. 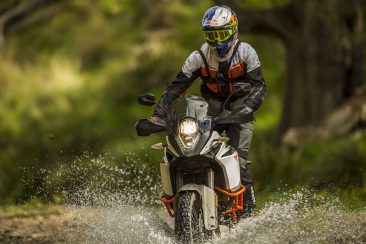 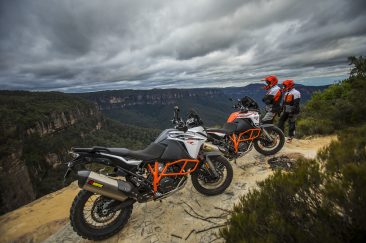 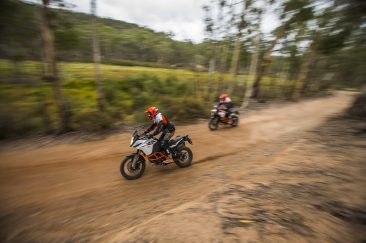 KTM is enlarging its number production and assembly operations around the world. Is that part of a broader growth strategy?

In addition to our production facility in India with our partners at Bajaj, we also have motorcycle assembly operations in Brazil, Argentina and Colombia. Because those emerging markets are protected by high import taxes, our products would not be attractively priced if we were to export bikes to those markets in a conventional way. So we decided that, for selected markets, we would set up a local assembly operation. By shipping the parts and assembling them locally, it has allowed us to be competitively priced and experience significant growth. In addition to South America, we also have a production assembly in Malaysia, China and Manila in the Philippines – where, if 40% of the value of the motorcycles comes from local parts and labour, we can export to Thailand and China without incurring any import taxes. That’s the only way our products can compete in those markets with the Japanese manufacturers, who all have production facilities in Southeast Asia. The two-wheel markets in countries such as Indonesia, Thailand, Malaysia, Philippines and China are massive. At the moment, we sell about 10,000 units in those Asian countries, but we see potential of up to 50,000 with the right partners and dealer network.

Is the key to KTM’s success its massive reinvestment into R&D in recent years?

There are many keys to KTM’s success, but that reinvestment you mention is a very important one. For 2017, the company’s plan is to reinvest 140 million Euros back into developing its products. Of the 3500 personnel who work with the company in Austria, more than 500 of them are now employed in the R&D Department. In the past two years, the number of people on our R&D building has doubled. And the company as a whole employs, on average, a new person each day of the year. The R&D building at KTM’s Mattighofen HQ recently doubled in the size (at the expense of the carpark that was one next to it), so that’s a huge investment. Then there’s the new Motorsport/Race factory. We also have plans to build a big KTM museum that captures the brand’s incredible success story, plus it will allow us to host conventions inhouse. In fact, if you look out the window from our Mattighofen headquarters, you can see five or six enormous cranes working specifically for the company’s expansion projects. It’s basically becoming a KTM village [laughs].

Coming back to the adventure bike market, what is KTM’s current share? And by how much do you think that can be grown in the coming years?

When I reflect on the development of our Adventure models from 2003 to the present, I think that KTM has now matured in this segment and, for 2017, it has the products that can contribute significantly to KTM’s growth over the next few years. We are convinced that the 1290 Super Adventure R is a state-of-the-art motorcycle that will tick a lot of boxes for a lot of customers, and that the 1090R will meet the specific demands of markets such as Australia. When you look at the adventure market globally, there is a lot of potential for us. BMW is still clearly number one in the ‘Travel Enduro’ segment – which is how I refer to the 900cc-plus adventure bike market – with around 50% of market share. KTM’s share of this segment is currently 10-12%. Being mindful that there are several manufacturers in this segment, our objective is to increase our market share to 15% on a global basis in the short-term. Then of course there is also the 800-900cc Travel Enduro segment, which may also present growth opportunities for us.

But you refuse to talk about KTM’s widely rumoured 790 Adventure model, right?