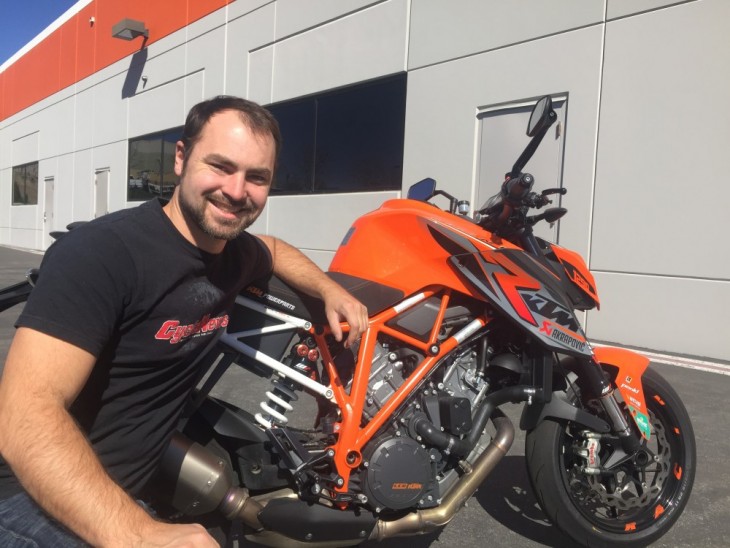 Cycle News has confirmed its entry for this year’s The Broadmoor Pikes Peak International Hill Climb brought to you by Gran Turismo, running from June 21-26 at Pikes Peak, Colorado.

Road Test Editor Rennie Scaysbrook will pilot the #33 KTM 1290 Super Duke R with help from KTM North America in the Heavyweight class, in a move he’s describing as a dream come true.

“I’m absolutely stoked to get the chance to race up Pikes Peak,” Australian Scaysbrook said. “It’s my first time doing the event and I’m new to this style of racing, so I want to give it my best shot and make it to the end safely. I’ve been watching onboard YouTube videos on the event for months to try and memorize the racetrack, but racing it will be a whole different ball game. I must say thanks to Cycle News and to KTM North America’s Tom Moen for backing this idea – Pikes Peak is such an iconic event and I can’t wait to get out there!”

The race will be the final chapter in a long running project between Cycle News and KTM to show the versatility of the 1290 Super Duke R machine that Scaysbrook has been using as transport in Southern California, with the bike starting off in standard form and slowly gaining performance modifications. It will now be taken off the road and stripped of all unnecessary parts so it will be ready to race up Pikes Peak.

“Even before the rule change (that banned clip-on handlebar sportbikes from competing at Pikes Peak late in 2015) the plan was always to run the Super Duke in the event as I feel it’s ideally suited to racing up the mountain,” Scaysbrook said. “It’s been a great road bike and there’s a lot to do between now and June but I’m looking forward to seeing the KTM in race trim and getting some testing done.”

The 2016 The Broadmoor Pikes Peak International Hill Climb brought to you by Gran Turismo will commence with official practice on Tuesday, June 21, with the race scheduled for Sunday, June 26. It will be the 100th anniversary of the event.

For more information on the 2016 The Broadmoor Pikes Peak International Hill Climb brought to you by Gran Turismo, visit www.ppihc.com.

Not sure what Pikes Peak is all about? Check out the highlights reel from 2015!