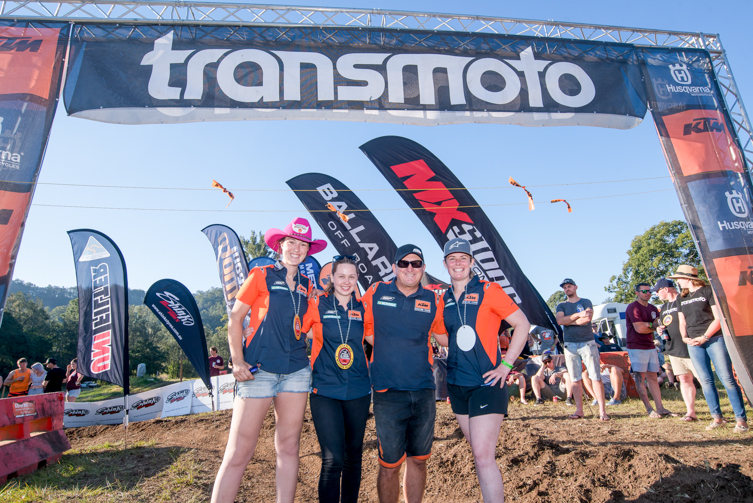 Some might think the pink cowboy hat clashed with my bike. But I think the colours look great together. Orange and Pink. You can’t get better than that in my book.

It’s the Transmoto 6-Hour at Conondale and I am here to have fun.  It’s been a hectic few weeks – months actually – and when I said yes some time back to being part of a 3-person KTM team, I hadn’t realised how quickly the weekend would come around.  So to say I didn’t have the best race-prep was a pretty accurate statement. As in fact, I had zero race-prep and zero hours on an EXC in the past few years. Yes, you read that right. YEARS.

My beast of choice lately has been either a 690 Enduro R or the new 1090 Adventure R. My passion for adventure has taken over the past few years, leaving me more focused on hitting the trails on the big bikes.  Granted I did used to race enduro – – but that was back in the day when I was young and foolish and my racing boots have been hung up for a fair while now.

So I was a bit apprehensive to say the least as I loaded up my hat and my gear and headed up to Green Park, Conondale.  It just so happens to be one of my all-time favourite race venues, from previously mentioned long-ago enduro career, so that soothed my nerves slightly.

But the thing I was most looking forward to was a FUN weekend. Being an events organiser, it’s generally me cheerfully bossing everyone around, so I was very much looking forward to having a relaxed weekend with friends. And from all accounts, the Transmoto events offered just this kind of atmosphere.  Plus – – my teammates were going to be none other than Tamara Grey and Naomi Carlson and if there is one thing I have learned over the years – it’s that having a great team around you can make all the difference. So boy was I happy I was racing with these fit, READY TO RACE ladies! Score! I take my title of Team Captain to actually mean Team Anchor, in all sense of the word!

And to top it all off – we had the patronage of the best team manager around – the one who brought us all together, KTM Brand Manager Ray Barnes.  So what were we to call ourselves? Well – – it had to be Barnesy’s Orange Angels of course.

So on a sunny Saturday afternoon in August, I found myself driving into Green Park three hours late as usual, a little bit worried that I had missed sign on, scrutineering and whatever else it was I was supposed to do before the race.  Barnesy meets me as I park the truck with a beer in hand, advising me Naomi had already scrutineered my bike, the team has entered and to grab a cold one and relax.  Whoa – – I may have been out of the race scene for a while, but I never remembered it being this casual? Awesome!

Music blares from speakers, as a Hill Climb competition rages next to the sign on tent.  It’s a push-Hill Climb comp, in which riders have to line-up and push their dead engine bikes to the top of the hill. Super entertaining.

The Ladies have already sorted my bike, so all I need to do is sign some paperwork and I am Ready to Race!  The easy-vibe continues through the evening, catching up with old friends over a few bevvies (my outstanding race-prep continues in fine form) and then it’s a novelty to sleep next to my bike in my swag. Again, it’s been too long since I went back to the basics like this and I can’t keep the smile off my face. 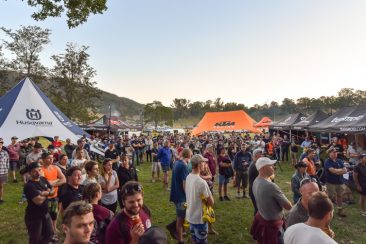 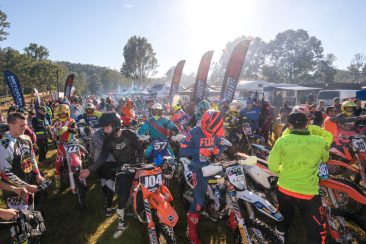 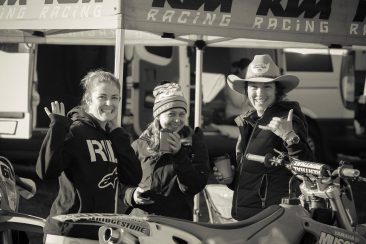 Being a 6-Hour race, it is a bit of an early start, however being awoken to Creedence Clearwater Revival blasting through the event PA, instead of someone hollering at you to “WAKE UP” is a wicked change to my previous racing experience.  Anyone who has ever raced AORC will know exactly what I mean.

Thankfully Tamara is on point with her preparation and has her KTM 150 XC-W in a prime position on the start grid.  Naomi is ready to be second on track and I’m taking my Captain / Anchor position very seriously, bringing up the rear as the third rider out.

Before you know it, Tamara has smashed out two laps and Naomi is already on track – meaning I’d better get ready.  It wasn’t until I put my helmet and goggles on and sat on my trusty steed that what was about to happen really sunk in . . .

“Um . . . should I have maybe had a practice ride on this bike? Or maybe ridden it up and down the paddock before heading straight out for a lap?” Everyone looks at me with blank expressions – – they didn’t think I was seriously when I said I hadn’t ridden an EXC in years. Oh well – too late now.

Naomi pulls in from her lap and Ray quickly transfers the transponder to my bike. Well here goes nothing!

I squeal with joy the entire way around the first three corners. YEEEHAWWW!

It takes me about 7 seconds to remember how to ride a dirtbike and for the next 28 minutes (okay, maybe 30 minutes) my smile just keeps getting bigger.  How could I have forgotten how much FUN this was !? And this bike – – – WOW!

Heart-eyed emoticons don’t even come close to expressing my feelings for the 2017 KTM 350 EXC-F. What a bike.

It hauls my ass up every hill without complaint, even with my rather inconsistent riding style.  The track is all chopped-up rocky bulldust hills, with off-cambers, creek crossings and rocks and roots alongside the creek bed. But nothing can deflect the 350 – even when I make a little mistake, it kindly waits for me to get my shit together and powers on without remark.

Nothing can dim my enthusiasm at being out there experiencing racing again after such a long time.

And what a great race to be a part of.

Let’s just be thankful that Tamara and Naomi are super-fit and were able to take the majority of the laps, allowing princess here a decent rest!

But what fun cheering on the other girls between my own laps and being able to take a breather and rest up before heading back out, meaning I’m not constantly battling fatigue. I’m able to enjoy myself and the race atmosphere that much more because I’m not pushing myself too far past my limits and “just surviving” as I have so many races in the past.

I’ve even got my parents along to help out again – just like the old days.  Mom’s race cookies are infamous and we soon have a steady flow of visitors through our pits scabbing cookies.  Dad’s off doing some bush mechanics to help Geoff Ballard get his bike running after something fell off during a lap.  And Ray’s making sure that there are plenty of race cookies left for him.  What an awesome day.

Six hours and three laps (for me that is) later, the pink hat and I have had the best day.  It’s one of those rare moments when last-minute plans just come together to create a great time.  I hadn’t put much thought into the Transmoto 6-Hour before attending, being so busy with other things, but all I have been able to think about since the event is how much fun I had!

And even though FUN was the word of the day – – it still felt pretty sweet to bring home the win in the Wonder Women’s class.  A massive thank you to my amazing teammates Tamara and Naomi for ensuring we claimed top spot.

So what now? Barnesy’s Orange Angels will definitely be back next year to defend our title! And if you haven’t done a Transmoto Event yet, put one on your calendar now. Pink hat optional. 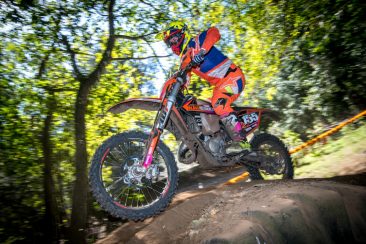 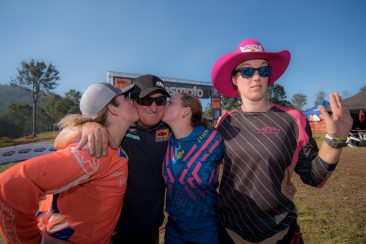 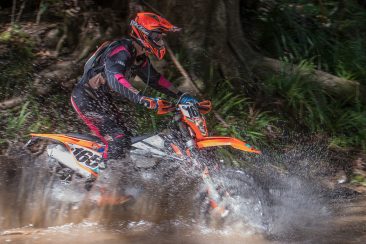 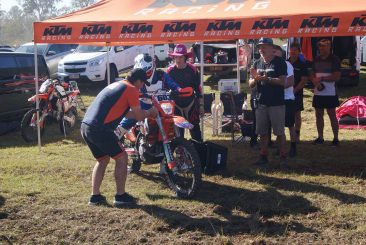 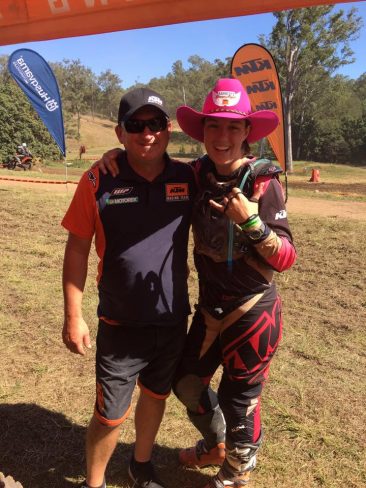 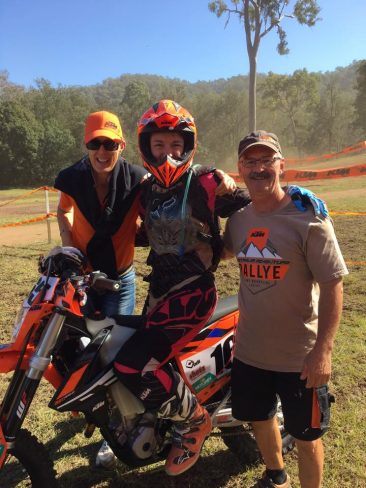 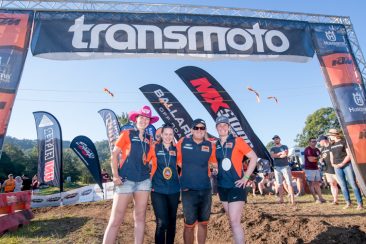