Meet Nick Trainor and his pair of KTM EXC’s – a new 2016 KTM 300 EXC and a long-loved 2005 KTM 450 EXC. We met Nick through the wonderful world of Facebook, after he patiently waited to receive a signed Toby Price poster from us. After receiving his posters, his comments back to us were . . .  “Thanks a lot for sending them, I won’t cop any more flak off my Yamaha riding friends now. The extra copies I will give to my real friends who ride KTM’s! They will love it. Thanks again.”   We had to learn more about Nick after that – so thank you for sharing your story Nick!

How long have you owned your KTM?

Both of my KTM’s I have owned since brand new and were purchased them from Boltons KTM in Kyneton.  I purchased the 450 in 2005 and it has been a great bike that is still perfect now, but you can not compare it to the current generation of bikes being released. The 300 was picked up in August – I got this one optioned up with all the protective gear because if you knew how I ride, then you would know I spend a lot of time picking it off the ground (one of the reasons I wanted to get a lighter bike!). The 300 is my first two-stroke and it has been a pretty easy transition from the 450, I like how gentle it can be and an absolute weapon the next minute if you want it to be.

A few months ago, before I bought the new bike, myself and friends went to the Dirt Bike Demo Day which was held at Calder Park Raceway.  This allowed you to have 5 rides on brand new bikes of your choice on 15-minute enduro loop.  I rode the new 350 four strokes and the 300 two strokes and it was a perfect day to really find out what bikes you liked over a proper enduro course. Both the new KTM 350 and 300 were unbelievable bikes and you could not go wrong on either one.  Our blue bike riding friends from work all said the same thing afterwards – they are going to get a KTM!

Wombat Forest Victoria would be my favourite place to ride, I am in there nearly every weekend and still find new areas to explore. It has something for everyone – easy stuff for the blue bike riders and for the guys riding Orange who like a challenge you can do some great hill climbs and hard enduro style riding.

The best stories always include alcohol the night before and probably are not PG rated for this newsletter! So this is one I can think of that is rated G.

A fair few years back myself and friends camped out at the old Nolan Rally which was held in the high country at Alexandra Eildon area.  These were great events with really good entertainment the night before the rally, they would have live bands on stage and the local Rotary club would put on  a big roast spit for dinner etc.  Part of the entertainment was a charity auction where the sponsors would offer up awesome bike products and you could bid against the other riders and end up with something at a great price which also helped the local area.

One of my friends bid on the prize of “First Place and Head start in the race for 4 people”.   I don’t think anyone realized what was actually on offer and he was the only bidder at $20!

So in the morning that put him, myself and two other friends on pole position out of approximately 800 riders!  And not only that we get a 5 min head start before they let any other riders take off.

So as we are now lined up at the front of the group and the excitement of the rally ahead is with us we started our bikes and waited for the signal to go.   All of a sudden we are away with a blast of the throttle,  my mate who won the first place was super keen and accelerated at lightning speed to take the lead…..  So fast that he completely missed the first turn to enter the forest.  I am not sure how long it took him to realize but I didn’t see him again to the end of the day and for a fair while there (At least 5 Mins) my KTM & I were leading the rally!

I recently took the work group regulars out into Wombat Forest for another weekend ride. It should be noted that I am the self-appointed ride leader on these outings, not because I have any sort of great riding ability as normally when we get to the hard stuff I can give a really good example of not how to do it. No, the main reason everyone follows me is because I can always get them all back to the car again.

But being the Trip Leader also holds a lot of responsibility, I have to decide who to ban from the next ride and for how many rides and for what reason.  Currently one of the KTM riding mates is on a 3-ride ban for spending too much time with the Yamaha riders.  If he keeps it up it could be a life ban . . . Brian knows what he has done wrong!

Anyway on this ride in particular I took them to a nice steep hill climb which I have never made it up before.  One of the other KTM riders had a go at it, under the condition I had to after him (this I was not looking forward to).

He made it about half way up which meant I had no excuse but to attempt the hill.  So with a little bit of a run up I charged up it, bounced up all the rock steps and tree roots, danced over the vertical wall and made it to the top.  I actually imagined I looked like a pro riding up this hill but it was the bike that did all the work I just had to hang on!

It turns out the only proof to back this story up was deleted by so called “accident” by one of the blue bike riders.  You will just have to believe its true.

A little while back I took the Father-in-Law out of bike-riding retirement and dragged him out for one of our rides.  He also has an earlier model 450 KTM that doesn’t miss a beat.  My friends enjoy when he comes out riding as there will normally be some sort of story to tell by the end of the day.  On this particular day I was taking him on some of my favourite single track which he is not the biggest fan of.  There are some steep technical climbs out of the valleys and I was standing on the side of the track advising him which way to go and as he tried to make the section he lost control, turned hard left directly towards me on one wheel and the bike came flying at me at full speed.  I was knocked to the ground and stuck under his bike while the back wheel tore through the seat of my pants and left tyre marks on my bare skin! I can’t be sure if he was aiming for me or not.

What is it that you love most about trail riding?

Trail riding is a great sport that allows you to get to places which you may not have had the chance otherwise. Its rewarding to challenge yourself and feels great when you succeed and keeps you coming back to have another go when you fail.

The variety of country to ride in Victoria is amazing and there is something for everyone out there, head in any direction from Melbourne from the Coast to the High Country its all good! Being able to have access to ride in these areas is something you take for granted in Australia but we really are lucky.

Having a bunch of friends to ride with makes it all the more better.

There is good group of guys to ride with at work and when we see each other automatically greet each other with a “Braap”.  Then get right into talking about bikes which we try to disguise,  so the throttle hand and bike noises have to be kept to a minimum if the bosses are around.

I haven’t ever had a bad weekend that involved motorbikes, camping, mates and a few quiet beers!

So where to next with your KTM’s?

After the recent purchase of the 2016 KTM 300 EXC from the great guys at Bolton Motorcycles – which is an unbelievable bike by the way – I have started to think about a new roadbike.  I currently have a road bike now that is setup for Track Days only and want to start doing some big trips away again. So this has got me looking into the KTM 1290 Super Duke GT which is coming out this year.  I am pretty sure this would be the ultimate bike to rack up the miles! Just need to convince the wife that we really need to get this bike so we can spend more time together enjoying the outdoors.  Time to start saving I think. 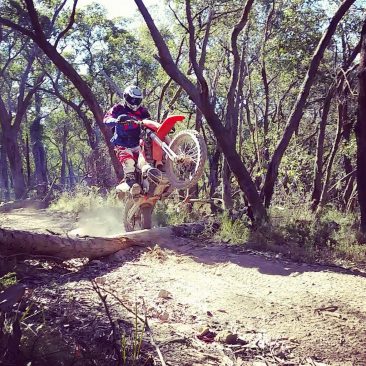 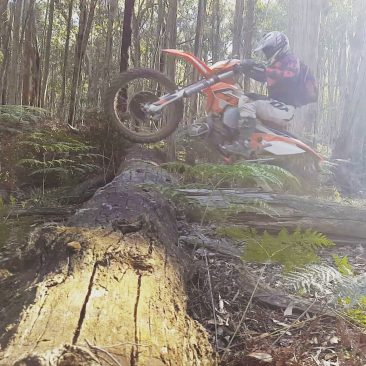 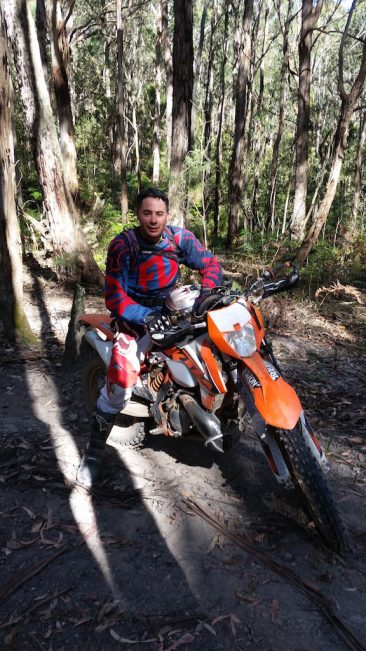 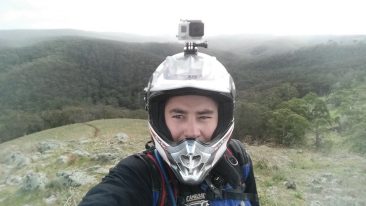 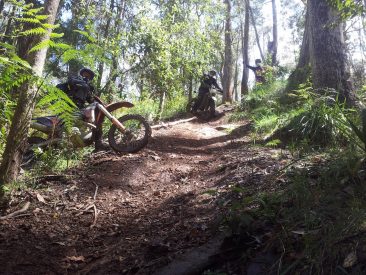 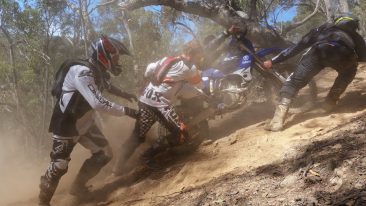 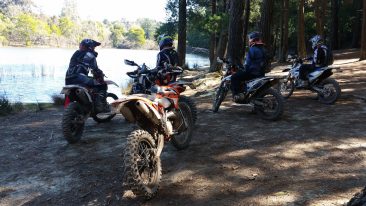 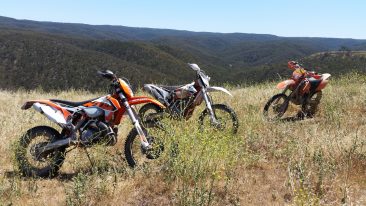 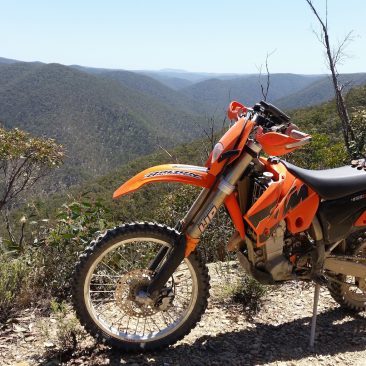 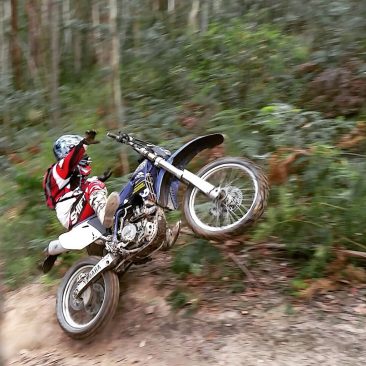 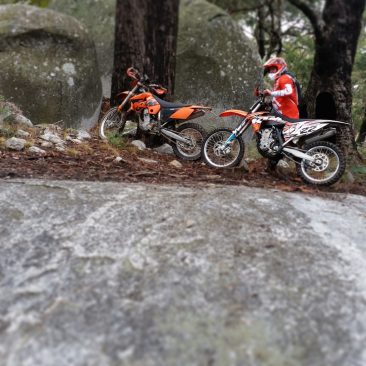 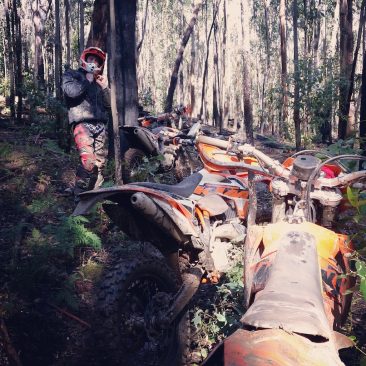 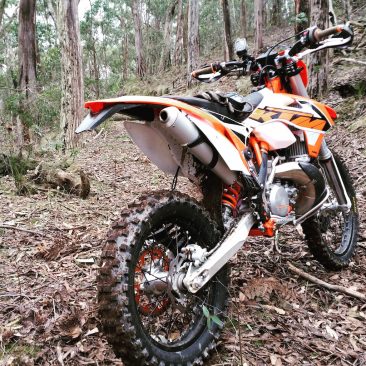