Deadwood, South Dakota.  Wild west, cowboys and gunfights are usually what come to mind when this tiny town in the middle-of-nowhere America is mentioned. Either that, or blank looks as many people have never heard of this out of the way place. Well, for me it now conjures up one thought: Adventure riding nirvana.

Riding in the rain doesn’t bother me. Actually the opposite – – it can provide a respite from the heat, or interesting challenges when mixed with the right terrain.  But no matter how tough I try to sound – the truth is that getting caught in the rain while riding may not be that big a deal, however starting the ride in the pouring rain puts a slight dampener on things (couldn’t help myself there, sorry!).

But I found myself on a Friday morning in August in the middle-of-nowhere America, having flown across the world to go adventure riding and standing under a KTM awning in the pouring rain, wondering if all the layers I had were going to keep me warm and praying that I didn’t end up on my arse in the mud in front of the Yanks.

The crew from KTM USA could not have been more welcoming and had provided a KTM 690 Enduro R for the day, some boots and a helmet thanks to the amazing organisation of Rally coordinators Jammi Robertson and Christy LaCurelle, as well as some very fashionable “Frog Togs” (I’ll come back to these) and I was ready to partake in the 13th Annual KTM Adventure Rider Rally in Deadwood, South Dakota.

A three-day event that attracts between three-to four hundred riders from around the country, the annual KTM Adventure Rider Rally offers adventure riders everything from “Ride with the Pro” day rides, GPS routes to explore themselves, vendor displays, demos on the latest KTM street and adventure models, coaching with Dakar-rider Llewellyn Pavey, technical seminars, and group meals that had the best bench-racing around.

Lafferty was to be my groups leader for the day and I was excited to ride with such a renowned KTM racer – – Lafferty is to the Yanks what Grabham is to Aussies. Multiple off-road racing champion and likeable larrikin or “smartass” in Yankee terms, we got on like a house on fire.  Well, that is once I put him in his place.

As the rain continued relentlessly and we got ready to get underway, I once again voiced my appreciation at the bike they had provided – – as no matter how much I have fallen in love with the 1190 Adventure R over the past few months, in this weather, I was happy to be riding the smaller 690 that I was comfortable with.

“So, Rosie, I was thinking,” Lafferty smiles at me in a knowing way. “With all this rain and all, maybe it would be best if, you know . . . maybe you rode on the back with someone.”

Joanna Kaczmarek, KTM USA’s PowerParts and PowerWear Marketing Manager, who just happens to be a multiple AMA Hare & Hound Champion herself, is standing next to me when he says this.

We look at each other and I am sure every man out there can imagine the look of disgust on our faces as we turn and laugh back at Lafferty. Never piss off a lady, pal.

“Sorry Mike, I don’t ride bitch with no-one thank you very much!” I laugh back at him.

Now it’s not that I think riding on the back of a motorcycle is a bad thing or should be looked down upon.  But to assume just because I am a chick that I should be on the back of a bike is what raises my hackles. I prefer to control my own bike thank you very much – – and those that know me will attest to my control freak behavior – and the fact that the KTM crew back home had specifically told me to “represent”, meant there was no way I was going to let AUS down!

By this point poor Lafferty can see he’s tapped the cobra on the head and shakes his head with a laugh – “Well fine, but if I have to pick you up more than three times, you’re on your own!”

The joke continues as we put our helmets on and I regale the KTM USA team with the story of “That Guy” who reckons he’s going to be spending the day picking me out of the mud.

But there’s no more time to dwell on it – – we swing astride our trusty steeds and delve into the downpour to get started with the reason I am here: adventure riding in the iconic Black Hills of South Dakota.

Along with Mike, our 13-rider group is lucky to have Paul Douglas has our co-leader.  A South Dakota local, he knows these tracks like the back of his hand.  After 20 miles of bitumen – a term no American has ever heard before and for which I received endless heckling, as they thought I kept saying “bitchin’” – we pull off the highway and attempt to warm up, as the temperatures are low and the rain still very thick.

Other members of our group include KTM USA Managing Director John Hinz and VP of Sales Tom Etherington.  John has rivers of water running out of his jacket sleeves, and Tom lets me warm my hands up on his heated grips. When will I learn that heated grips make the world a better place!?

Paul makes the call to change up the route and head into the dirt earlier than intended, to escape the frigid highway riding.  A beautiful smooth gravel road, offering perfect traction from the all moisture, stretches out before us.

Sounds perfect to me! Time to show “That Guy” that I (hopefully) can stay on two-wheels!

So off we go – – all of 20 meters down this gravel road, before Paul stops, turns and points off the track.

Mike comes past me, straight into the ditch and disappears into the trees on this tiny single track trail.

Okay then! Let’s do this!

And off we went. On the best single-track I have ridden in years for the next 20 minutes.

It was EPIC.  Tyre width wide tracks through rolling hills and grass fields, with some tight tree sections and little logs, down into gullies and up the other side, undulating, flowing, FUN! It didn’t matter that it was still raining, there seemed to be bucket loads of traction in the wet dark dirt.

And the best part – – I stuck behind Lafferty the whole way.  Even though he was in (maximum) second gear idling along on his 1190 Adventure R and I was riding with all my concentration just to keep him in sight.  It really could have gone the other way at any point (i.e. me ending up in the mud on my arse), but thankfully I kept my wits about me to get to the end of the section right on his tail.

“Yeeeeehawww! That was BADASS!” The smile on my face hurts my cheeks, but I can’t keep from laughing and grinning like an idiot.

“Well, you proved me wrong. You can ride!” Mike ruefully shakes his head and puts his fist out for a fist-bump.
Damn straight! I laugh as the rest of the group pulls up and Lafferty concedes to the fact he didn’t have to pick up my bike.  John and Tom find this especially hilarious. Thank god I didn’t fall on my arse!

And the euphoria I felt after that first awesome section didn’t leave me throughout the entire day. 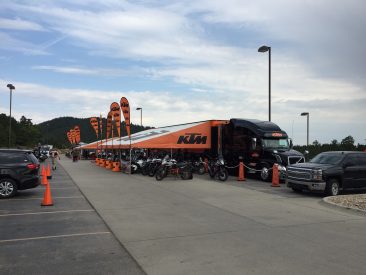 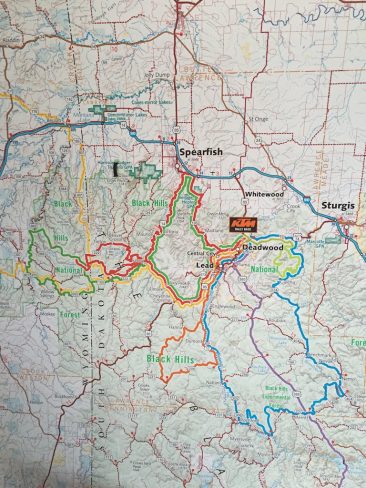 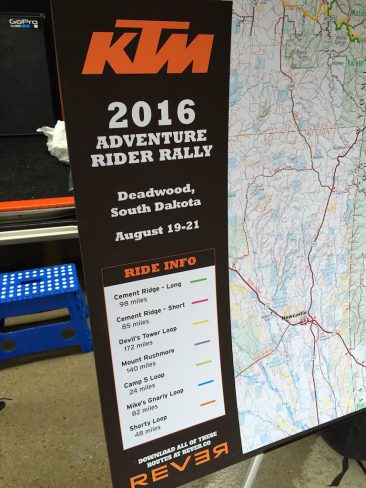 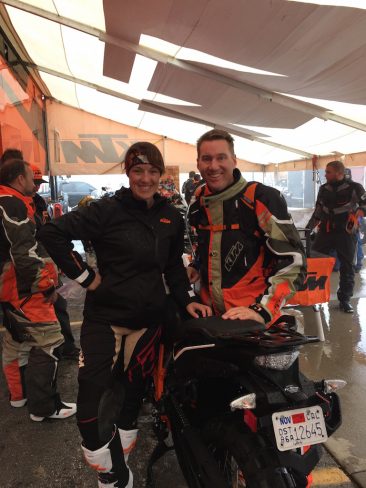 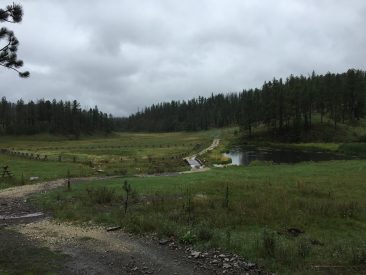 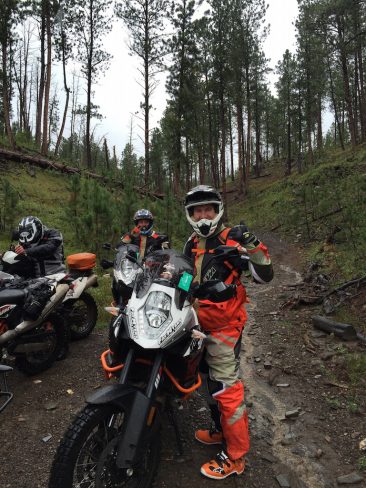 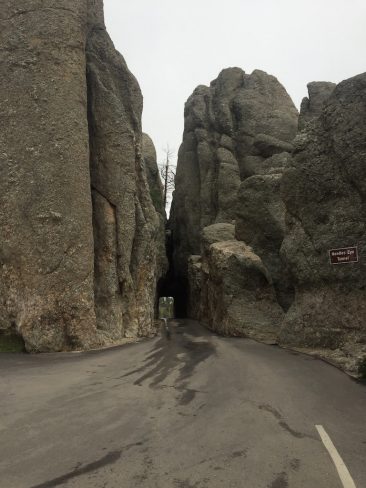 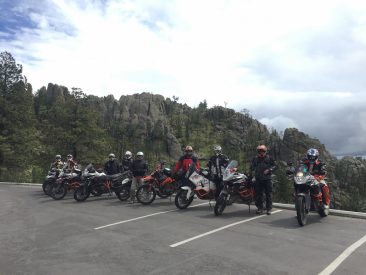 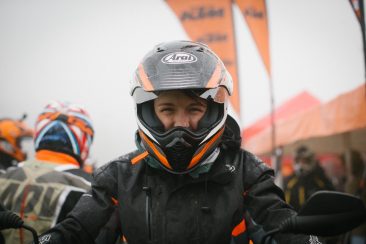 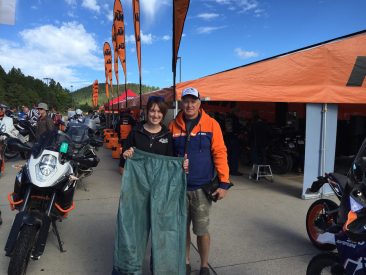 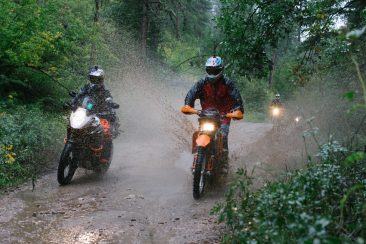 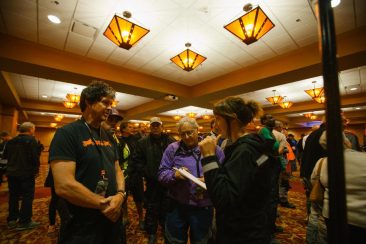 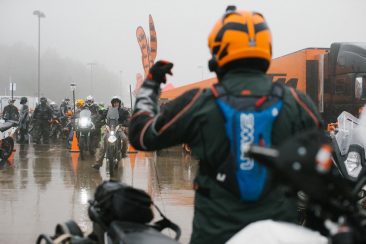 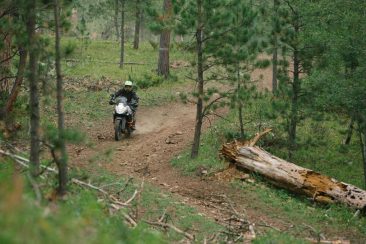 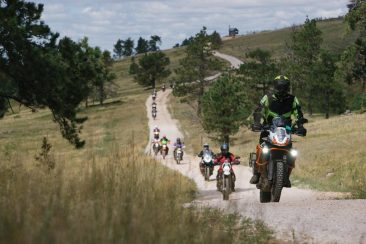 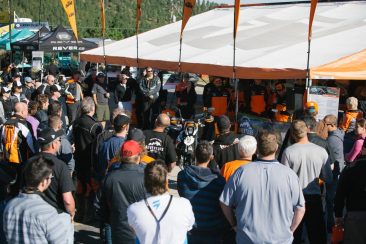 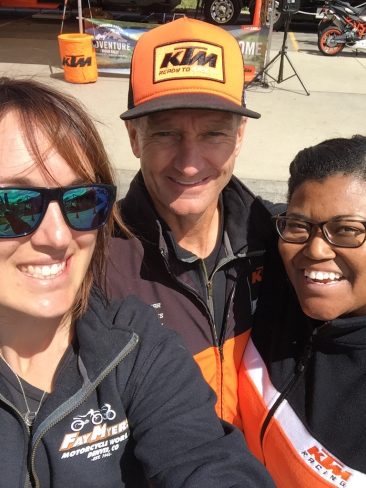 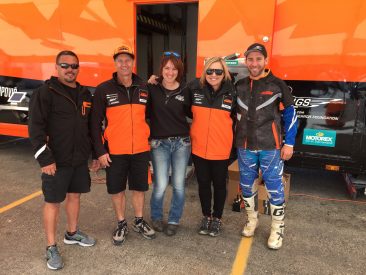 The ride continued through epic back-country tracks, with rolling hills, dark soil and few rocks.  Then onto faster smooth gravel sections with fun curves and turns.

We then hit more bitumen that was among the best black-top roads I have ever ridden – – Needles Highway led us into the Black Hills National Park and the famous rock formations surrounded us.  We continued through tunnels cut out of the stone and curly-cue switchbacks they call “Pigtails” with wooden bridges that literally circle back around under themselves like a roller coaster.

We saw Mount Rushmore.  Wow.  And stopped at a roadside diner called “The Sugar Shack” which is a local hotspot and has amazing onion rings.

The rain stopped mid-morning, although I was having way too much fun to even notice.

And mid-afternoon the sun came out, so at one point, around 4.30pm, our group came to stop on a hilltop in the forest and sat quiet for a minute when the engines had shut off.  Looking around at the smiling faces, we all started talking at once about what an epic ride we had been having and not one of us wanted to finish and go back!

So we kept going.

And with the sun having been out for a few hours – – I was finally drying out and warm enough to take off my “Frog Togs”.  These ingenious, albeit horribly ugly, rain pants that Paul kindly lent to me, were several sizes too large for me and throughout the day I had been again voicing my concern about the fact that – and yes, this is a totally girly thing to say – they made my arse look big.

“Sorry Rosie, it’s not the Frog Togs that’s making your arse look big – it just is big.” Lafferty fires back at me the sixth time I say it.  I guess I deserved that after taking the piss out of him all day!

It’s finally time to head home – – and to cap off an awesome day, we return via the epic single track we started on.  With the sun blazing down, it turns into a completely different track – – no more endless traction, it is now slippery and rather interesting.

John Hinz and I are having a blast through this section – – I’m doing everything I can to keep the 690 within sight of his 1190 R.  Without notice, a blur comes past both of us – – Lafferty rounds us up without breaking a sweat. Totally Grabbo.  We drop into a gully and – uh oh! – John tucks his front wheel on the slippery slope and loses the front, executing a perfect roll off the right side as the bike goes down.

He jumps to his feet and I quickly park the 690 so I can help him lift up his bike.

Good times doesn’t even come close to covering how much fun this day was.

The rain catches up with us twenty minutes out of Deadwood and we finish the day as we started – soaking wet, but absolutely thrilled at the experience.

At dinner, Mark Hyde – who runs the KTM USA RIDE ORANGE Demo Program and is the “on-bike” organizer of the Rally – roves the room with a microphone coaxing out the best bench-racing stories of the day.

I attempt to hide in the doorway – – however he spots me from a mile away and I have the ladies in the room cheering me on when without shame I land Lafferty squarely in it with my “ride on the back” story.

Mark Hyde is quick to point out that although Lafferty didn’t have to pick my bike up today, it sounds like I had to pick up John’s bike!?

John grabs the mic and tells his side of the story – – “So I was flying along this single track and Lafferty can’t get by me, even though he’s trying every dirty trick in the book. He finally makes the pass – somewhat dubiously – and I stick on his tail for 10 minutes, showing him a wheel every corner.  Until finally down this slippery hill, takes out my front wheel and I go down!”

I cannot thank the KTM USA team enough for their generosity and hospitality – and hope to repay the favour if some can come to visit for our KTM Australia Adventure Rallye! I want to pit Lafferty v Grabbo on KTM 1290 Super Adventure’s and see what happens . . .

Check out the event recap video below – – 0.44, yours truly heads into the downpour!