Adventure riders are a unique breed, in the sense that they “come to be” out of other disciplines. Riders were either into dirt bikes or street bikes or maybe both, before finding that adventure riding is the best of both worlds.  Barry De Passey was one such rider, who has spent his entire life riding different varities of motorcycles, before turning to adventure three years ago. He now owns an 1190 Adventure R and wouldn’t have it any other way.

Experience:  I have been riding Motox bikes through the bush since the age of 12. I spent 6 years Road Racing, culminating with a State 250cc Championship Title and Lap Record. I’ve spent 25 years road riding on 8 different Bikes and now 3 years in the Adventure Bike market. I have lived most of my life in the South West of Western Australia.

2015 KTM 1190 Adventure R with a few modifications. Slavens High Fender Kit. KTM 690 SMC Front Guard (colours match perfectly). KTM MotoX Fork Guards 2008-2012 complete the high Fender Set-up. Powercell Airfilter fitted from new. Homemade Racks copied from Wolfman Racks which are no longer made. I mounted them with equal spacing on either side and a fraction higher than where other racks mount. I much preferred my positioning of the racks. If my feet were down my legs could swing back and still clear the bags. Home Made iPhone mounts with waterproof housings. I am running Galileo and Memory Map Apps. Wings muffler. Barkbusters with Storm Guards. Bar end mirrors with homemade mounts. These mirrors have cleared up the airflow around my helmet. They are adjustable and I swing them in for off road riding. KTM heated Grips. I have a 2nd set of wheels for off road, running tubes and rimlocks on a 2.5” Rear Excel Rim, 1.85” Front Excel Rim, and Pirelli Scorpion Rally Tyres. Finally a B&B Bashplate which mounts to the frame and not the engine.

How long have you owned your KTM? 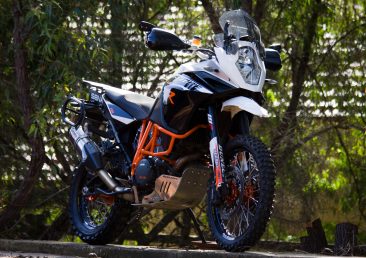 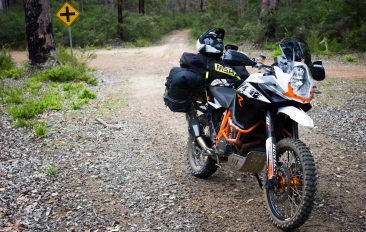 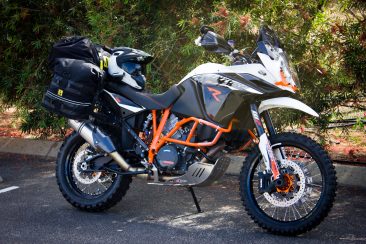 Favourite Adventure riding destination:
We are spoilt for choice in Bunbury. We are smack bang in the middle for access to great day rides. My mate Andrew and I have spent a few day rides on our 1190’s riding throughout the South West WA. We have excellent fire trail access from Perth to Albany or as Far East as you want to go. If the weather is too hot we will head south to the Nannup and Pemberton region which has awesome hills and single tracks that meander through scenic Karri forests. If the weather is cold or we have had too much rain we can head North to Perth or East to Collie via the Darling Scarp with 200m and up to 500m elevation changes.

For road rides we have numerous good condition back roads throughout the South West. Coming from a Road Racing background and always having a sportbike, I could never go without a competent road bike. My first bike in the Adventure market sat alongside my R1. The 1190 Adventure R is such a capable road bike that I had no hesitation in selling my R1. The 1190 R fills both roles with aplomb. The 21” front wheel and Geometry are ideally suited for off road riding but that does not mean it cannot compete with sportsbikes on the road – it can! The V-twin Power and Torque is addictive and causes an instant grin factor. And after a 1000km day riding in a comfortable position, I can guarantee that I feel better than after a 200km trip on a sports bike. Plus if I want to travel further than a day ride, I can load it up with gear and travel with ease and comfort, something which wasn’t so easy on my sportsbikes.

My most memorable ride to date would be our trip to Peak Charles in WA. There were 4 of us with similar riding abilities and a nice mix of Adventure Bikes out riding and camping for 6 days. We hit the jackpot with the weather. Heavy rain in the preceding weeks made for compact sand for the 2000km trip and we had enough time for the puddles to dry up.

The first day was mainly open fire trails with a little bit of single track thrown in. I find it amazing that you can take this Superbike engine on 1st gear single tracks with ease and then straight out on open trails or the highway and Superbike speeds. The fuel and mapping curves allow this flexibility with ease. I did work out after Day 1 that the rate of sideways fun I was having was going to limit my ability to finish the trip on the same rear tyre. Day 1 was 415km from Bunbury to Denmark and 9hrs 50 mins in the saddle.

Day 2 was a mammoth 560km off-road in 12hrs 24 mins.  We left Denmark and did approx 40km through hard compact sand. Even on a loaded bike (I had 24kg extra at this point) – this was an absolute blast. The 1190 was still crazy, sideways fun. For Day 2 I had switched over to Off-road Drive Mode to hopefully save my rear tyre some more. This mode was still a blast while still allowing a decent amount of rear wheel steering. After this stretch it was mainly open gravel roads to Hopetoun via the Stirling Ranges.

The next few days can be summed up as one. Each day was between 8 to 20 hrs and 250km in remote locations, although we did re-fuel and water in towns. We added a further 18kg of fuel, water, food and drinks. We were now heading into infrequently used tracks that were narrow and at times petered out to completely overgrown scrub. I could really feel the extra weight now, especially in the occasional sections of boggy sand. Although this bike is heavier than my previous Adventure bike, the balance, low centre of gravity and geometry are spot on and make this bike more capable off road, especially in sand. Power is what you need in sand and the 1190 has it in spades.

To me, the most memorable elements of the ride are the challenging parts, the grin factor parts and the feeling of accomplishment at the end. I don’t think I (or Rod, Bob and Andrew) will forget changing my punctured tube 4 times in 36 Deg C heat with little shade. I couldn’t forget laughing to myself riding around Lake Cowan thinking how good can this get? 150 km hard compact track, switch back after switch back and the traction control light flashing away like a strobe light. At the end of it all, that feeling of accomplishment, after travelling unsupported through some harsh environment and having seen some incredible sites and learning their histories, including the spectacular site of Peak Charles popping up on a flat horizon, 150km (race) track around Lake Cowan, The Woodlines Track, Cave Hill and the coloured rocks of the Breakaways. And I got to do it all with some great tyre changing mates!

The 1190 R has certainly opened up my riding possibilities, my knowledge and my appreciation of the areas I live in and travel to. I’ve come back from these trips reading more about the history of these places and have a new appreciation for how tough it must have been and ingenious our explorers were. 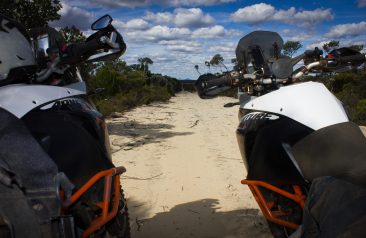 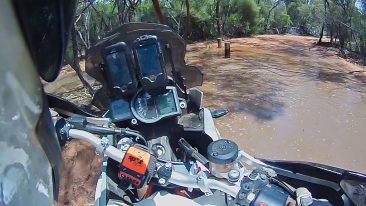 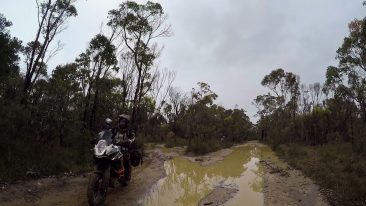 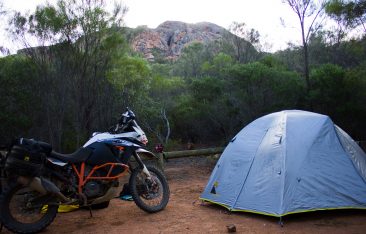 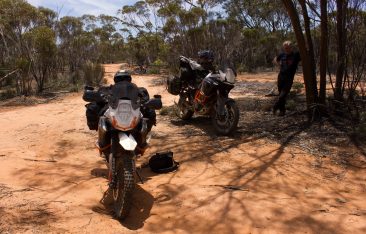 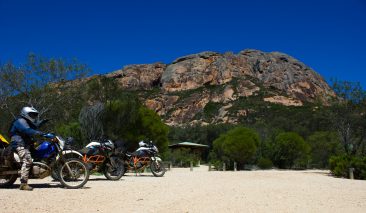 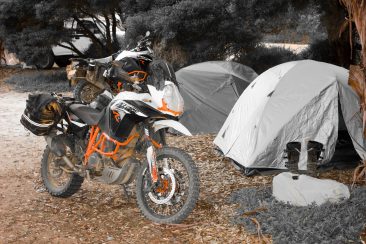 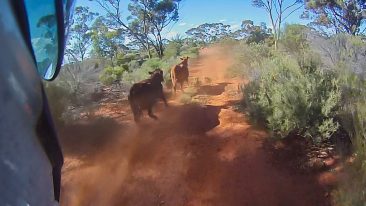 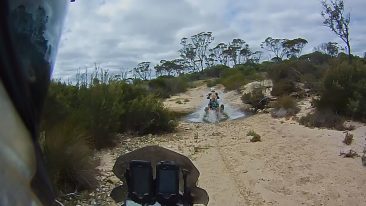 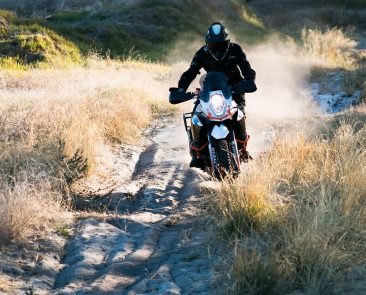 What is it that you love most about your KTM?

The 1190 Adventure R is such an accomplished motorcycle at several disciplines.

I can choose a Road Ride – a day scratching with sportsbikes, weekends or longer. I can load it up with gear and travel with ease and comfort.

I can choose an off road ride – the Traction Control and lean angle ABS help provide an illusion like you’re  Toby Price for a day spinning sideways and backing into corners. Or I can load up the bike and head off road and see sites and parts of the Australian Outback that large percentage of the population won’t see.

Where to next with your KTM adventure bikes?

For now during summer, the Road Tyres are on and I have a few weekend trips planned. I can’t wait for some winter rains and I get to put the dirt shoes back on. We are in early talks about a trip up to Karijini National Park later this year. The Flinders Ranges and an East Coast KTM Adventure Event are also on the “to do” list.