Anyone in Australia who has ever ridden a dirt bike has heard of the Finke Desert Race. It is the biggest and fastest desert race in the southern hemisphere. Every year, around 600 bikes and 150 cars tackle the event in an attempt to get ‘there and back’.

Unlike myself, racing this event may not be an option for you, however have you ever wondered what it would be like to ride the track? Here is a little summary on my experience with the guys from Outback Motorcycle Adventures on their Finke Desert Race Experience Tour.

It all kicked off on a Friday night with a meet and greet with the guys and machines to introduce the weekend ahead over a few ice-cold tins and sausage sizzle.

All the important stuff was covered from each stop along the way, the finely tuned KTM motorcycles and of course a few safety rules to abide by. Once the formalities were said and done, we all got to know one another and prepared individual settings on our bikes. 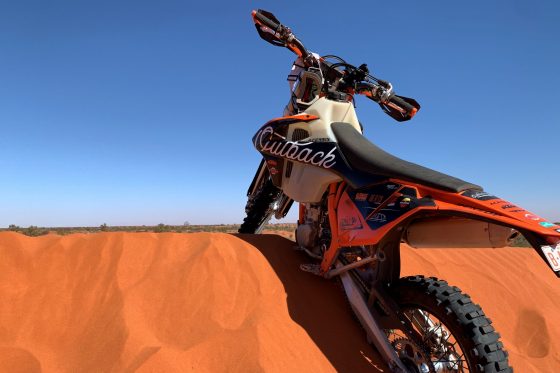 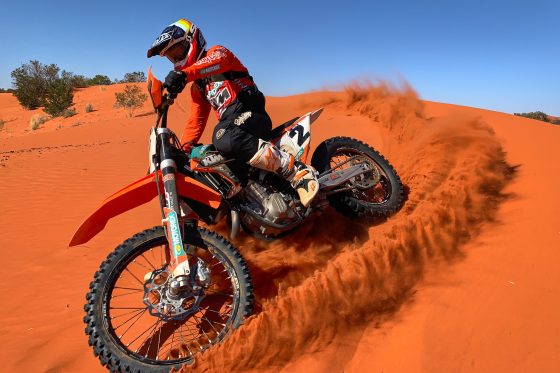 The next morning, we all arrive at the workshop at 7am sharp to depart south heading for the old start finish line of the Tatts Finke Desert Race. On arrival we all regroup to have a quick debrief and make sure all bikes and men are set for the big day. This was one of my favourite parts of the entire trip as there were very promising signs of rain (which is extremely rare to Alice Springs), and some very anxious men preparing themselves for what was ahead.

“Racing this event may not be an option for you, however have you ever wondered what it would be like to ride the track?”

We all set off for Deepwell which is 70km down the Finke track in some of the best sand dune country around. Along the way we suffered one get off with a case of whisky throttle and a bit too much excitement! It made for a good laugh around the fire later that night as a sore arse started to set in. 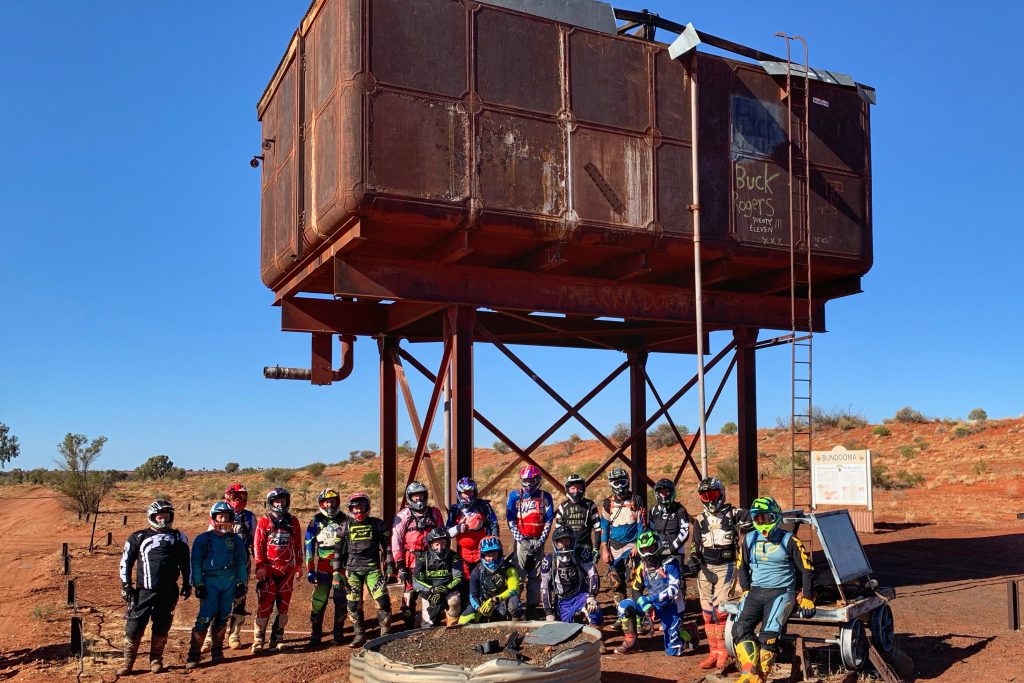 On arrival to Deepwell we started coming into a light shower of rain, which helped keep the dust down and made the riding a hell of a lot more fun. We refuelled both bikes and bodies and set out to reach the Rodinga Ruins (around 110km mark) for our next stop.

During the ride towards Rodinga the rain became extremely heavy and turned the track into a mud bowl!! I’d never seen anything like it. the track is very hard pack and rocky through that section which made for a wild ride.

“I enjoyed my time that much that I have since returned another two times later that year and I plan on attending another 2 this year….”

On arrival to the ruins we had to keep pushing through to our third stop of the day Bundooma Tanks (140km mark on the track). We chased the storm the entire time along the way. Luckily from Rodinga to Bundooma the track heads back into sand dune country, which made for a freshly groomed motocross track feel once we hit the big whoops. the track conditions couldn’t have been any better, it was unlike any pre run I had ever done and trust me there has been a few! We pulled up at the tanks to go through some of the history of the iconic stop, which was cool considering how many times I had ridden by and never fully taken the opportunity to read the signs. The massive tanks also providing some well-deserved shelter from the rain. 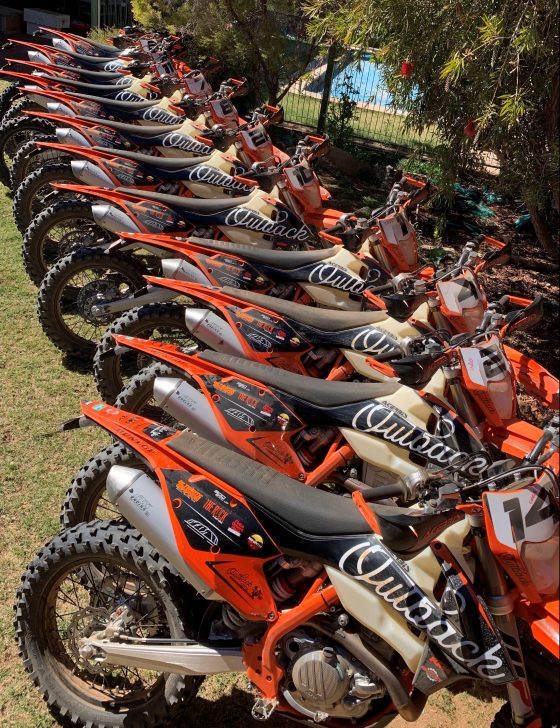 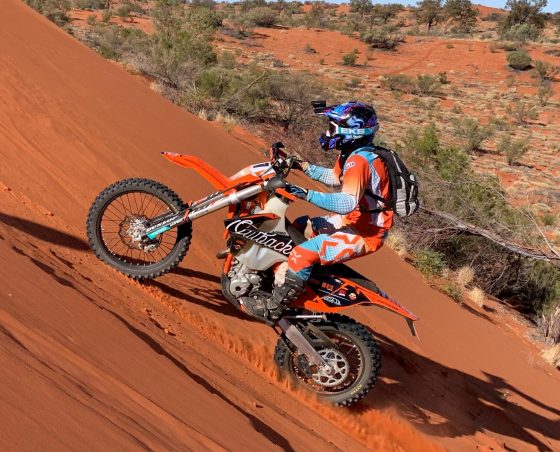 We continued to chase the rain for a further 20km where we reached our camp spot for the evening at the 160km mark aka the second fuel stop. We all crammed in under the massive quick shades to a delicious lasagne lunch. We weren’t in camp for to long as the day was still not over. It was back onto the bikes to ride down the service road parallel to the track to arrive at Finke. There is an age-old rule for pre running the track, which is heading south before 12 and north afterwards, which was the reason for the service road riding. We arrived at the small community of Finke and the finish line of the Tatts Finke Desert Race.

“They had pulled up 50m short of the finish line and had to race each other on foot to be the first one there, it was like something out of Talladega Nights!”

We embarked on a quick tour of the town and had a good laugh with a few of the lads who had made a bet to beat each other to the Finke end. They had pulled up 50m short of the finish line and had to race each other on foot to be the first one there, it was like something out of Talladega Nights. Quick re fuel and we headed back down the Finke track to our destination for the day, 160km fuel stop.

The rain continued the entire time until we arrived back at camp, which couldn’t have been any better timed if we tried. We got a fire cranking and sat around drinking a few froffies and telling war stories of the day whilst enjoying a massive steak dinner. by the end of the night there was gear and boots scattered all around the fire to try and dry it out for day two. 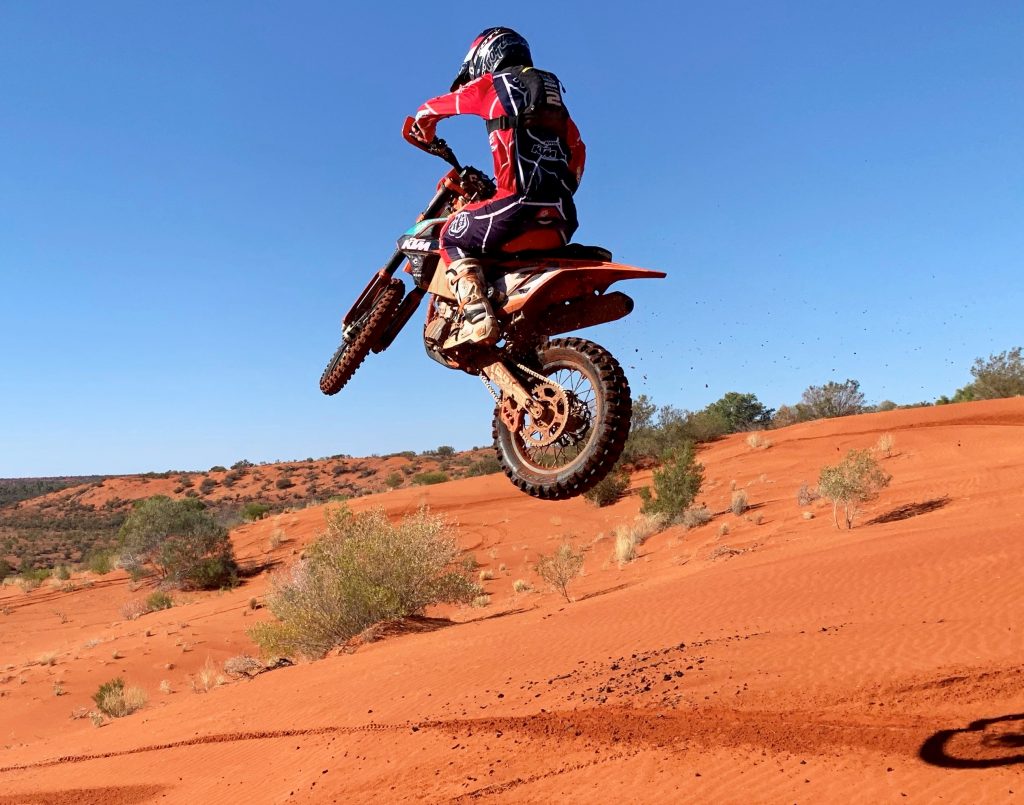 Morning arrived, and another amazing feed from the guys of bacon, eggs and sausages to kick start the day. we headed away from the Finke track for a small trail ride over to a massive red sand dune. Now I have been up and down this track over 500 times over the past twelve years and never once knew of this place, I couldn’t believe the size of this dune.

What made this even better was the amount of rain the day before, you can not beat our red sand when its wet! We all had a blast jumping and riding around this massive dune.

“We got a fire cranking and sat around drinking a few froffies and telling war stories of the day whilst enjoying a massive steak dinner.”

Once we were all finished playing around, we headed back to Westies Hill (a dune 5km south of the Bundooma Tanks) for a spot of lunch before departing back along the track for Alice Springs.

We all arrived back to the workshop for a debrief and some well-deserved beers. I had never done such an event like this with such a relaxed vibe and great group of blokes. The entire team at Outback Motorcycle Adventures were amazing the entire time and ran an incredible tour in such testing conditions. I enjoyed my time that much that I have since returned another two times later that year and I plan on attending another 2 this year.

I strongly recommend this tour for any calibre of rider looking to tackle this harsh track.