“If there’s anything Dad loved more than serenity, it was a big two-stroke engine on full throttle!”

Dale Kerrigan sure had it right.

Alas, gone is the golden-era when a full grid of two-stroke’s smoked up the start line. Manufacturers – and riders – seem to have moved away from the high performance and light weight of the two-stroke.

All that is except KTM.

KTM is still one of the only manufacturers to be producing – and developing – two-stroke engines for racers and riders alike.

Enter Jayden Rykers. A young WA motocross racer who, at 19-years-old, has moved across the country to pursue his racing dreams and partner with the mighty KTM 250 SX.  We caught up with Jayden to give us a bit of an insight as to why his weapon of choice is the mighty 250 two-banger and how his 2016 season is going so far. 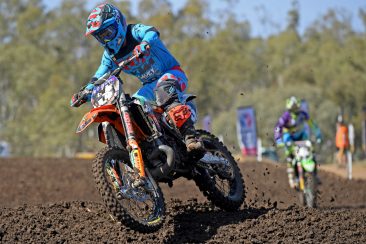 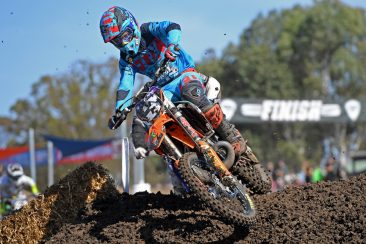 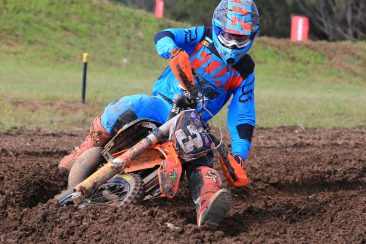 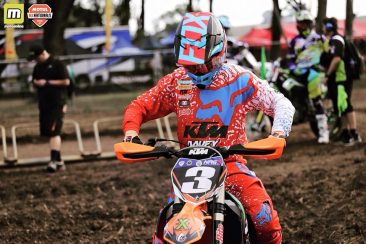 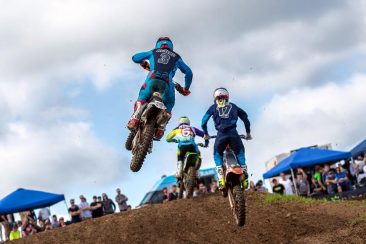 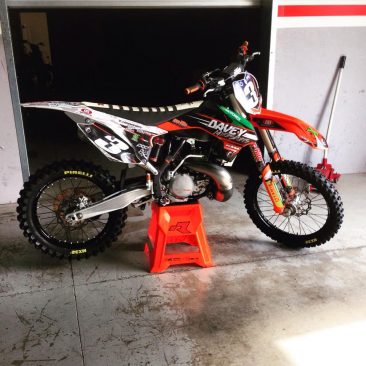 Jayden, what does your 2016 race setup look like this year?

I have got a great setup this year, with support from KTM Australia, Davey Motorsports, Moss Insititute, Trac Rite Suspension, Foxhead Australia, Oxyfresh Australia, Pirelli, Motorex, The Collective Family, Pod Active Kneebraces, Berry Sweet Strawberries, Evolution Motorcycles and SP Moto Seats. Plus a lot of assistance from family and friends which makes such a difference.

I am racing the MX2 class this year in the MX Nationals. I’ve already had a strong start to the season, clean sweeping both the Victorian titles opener and the New South Wales Championship in Canberra back in March. Those races were a good lead up to the MX Nationals.

I’m really looking forward to moving up to MX2 this year – I think a few of the Under 19 guys from last year are a little bit underrated coming in, but being under the radar a little bit is a good thing.

You would be one of the few 2-stroke MXer’s on the grid, why did you choose the KTM 250 SX?

I raced two-strokes in Juniors, and this is my second year on the 250 SX.

The biggest asset of the KTM 250 SX would have to be the power to weight ratio. And the bike is literally ready to race straight away! It is very easy to adapt to and also cheaper to maintain and race. This is a big thing and something you might not think about when choosing a bike, but maintenance costs can definitely add up!

Back to the weight, it really does have one of the highest power-to-weight ratios in motocross. The lightweight engine makes it really easy to ride and when your cutting long motos that is a big factor in racing.

Hailing from WA, are you based on the East Coast now? Or is there plenty of travel involved in your racing?

At the beginning of the 2015 season I moved to the East Coast, basing myself with Trac Rite Suspension (Darren Lee) and built up my program around Melbourne.  It made things so much easier with traveling and to be able to train with a lot of pro riders and ride on some great tracks.

Tell us about your 2016 season so far . . .
2016 has started of fairly good in terms of my goals I had set before it started. I’m already ticking a few of the list and well within reach of the others. Moving to the MX2 class was a fairly easy transition for me and I feel very comfortable and confident in my team and the program I have, which has made the transition to MX2 much smoother.

At the opening round at Horsham, I felt I proved myself to be on the pace on my MX2 debut and I finishing 4-10, for seventh on the day.

Had a bit of a tougher race at Appin, I qualified 11th to then score 3-5 moto results which would have seen me on my first ever MX2 podium, however a bit unfortunate during race two I jumped off the track to avoid a hay bale and got penalised 10 seconds, putting me back to 9th and 5th overall for the day.  But that’s racing, I can’t let it faze me so I’ll be back even stronger for the next round in Broadford, which is basically a home round for me.

What is your favourite part of motocross racing?
There would be a few things I enjoy about motocross racing . . . of course I love to win!  I’m very competitive and its great to see when you work so hard and train day after day, for the results to show on the weekend and your work ethic during the week has paid of.  Also meeting some lifetime friends and seeing some great places all around the world!

Where to with your racing from here?
I’m looking to continue in Australia and gain factory support and I’ll continue to chase the MX2 championship, from there I look to race internationally.

Thank you for your time Jayden, good luck at the MXN this year and it’s great to hear that KTM 250 SX in full song when your out on the track!