Mason Semmens has a storied history with the brand in Australia, climbing through the ranks as part of the KTM Junior Motocross Racing Team, turning professional in motocross with KTM support and now making the full-time transition to off-road alongside multiple national and world championship winner Daniel Milner.

It’s been a unique path of sorts for Semmens, the 18-year-old from Hoddles Creek in Victoria always maintaining an active interest in the Australian Off-Road Championship (AORC) and enjoying his share of success in the Hattah Desert Race, including a stack of junior wins and victory in the Under 19s class last year.

In a detailed look at the career of Semmens, which formally commenced with KTM in 2014 when he signed with the factory junior squad and went on to deliver a trio of Australian Junior Motocross Championships over a three-year period, read his take in his own words as we cover a variety of topics with the talented and incredibly motivated teenager. 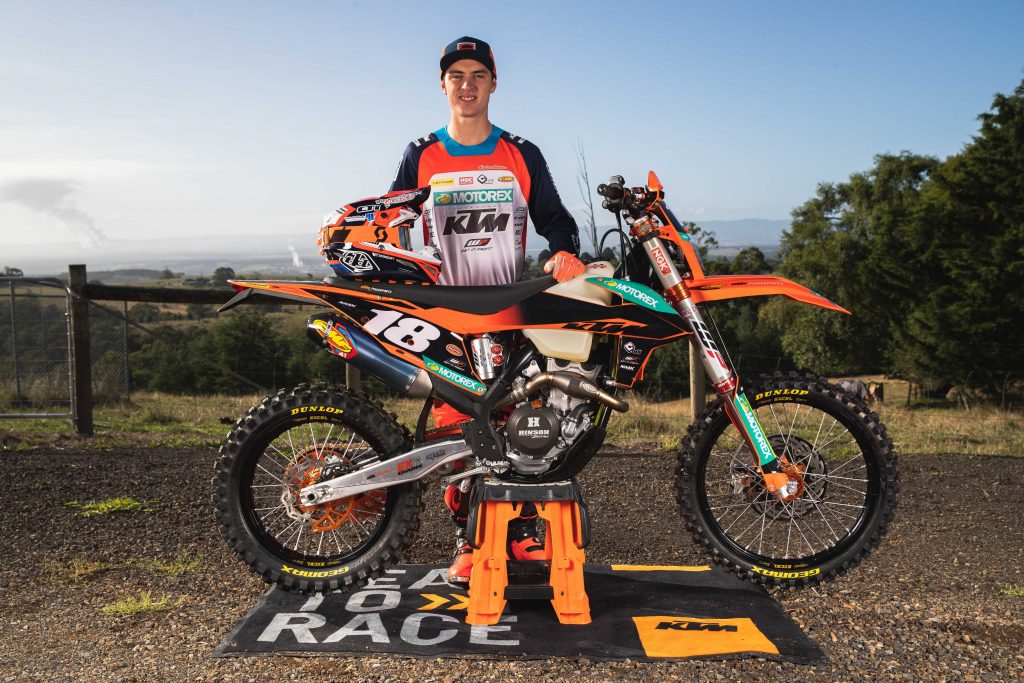 “I started with KTM in 2014 on a KTM 85 SX racing for the KTM Junior Motocross Racing Team. I was with them the whole way through my junior career, pretty much, until 2017. Dealing with Tam Paul, who was team coordinator at the time, he’s a really great guy and did a lot for me. From there, 2018 was my first year in seniors and I raced for the Davey Motorsports KTM team. I didn’t really have a good run for two years in the MX Nationals, to be honest. It was just pretty much a case of injury after injury. I was like, ‘this motocross thing ain’t really working out’, so I spoke to KTM and expressed an interest that I wanted to go off-road and, thankfully, I happened to get a spot on the KTM Enduro Racing Team.” 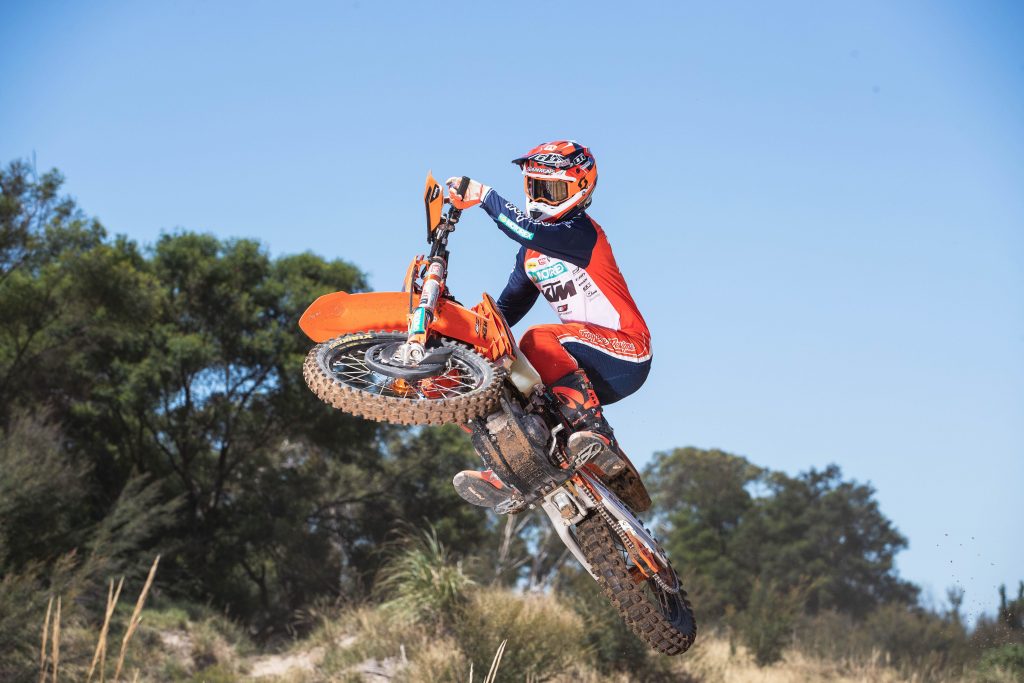 “As I was coming up, the KTM Junior Motocross Racing Team had Mitch Evans on there and then Hunter Lawrence, Jett Lawrence, and basically all of the best young riders at the time. You had all the top guys that were racing on the KTM team and that was the junior team everyone wanted to be on – especially me, anyway! – and I was lucky enough to get the chance to race for that team eventually. It’s a factory junior team, so provides such good support and then at the junior Aussies they bring the truck in and we get to pit out of that, so it was always really cool. It’s definitely the team to be on.” 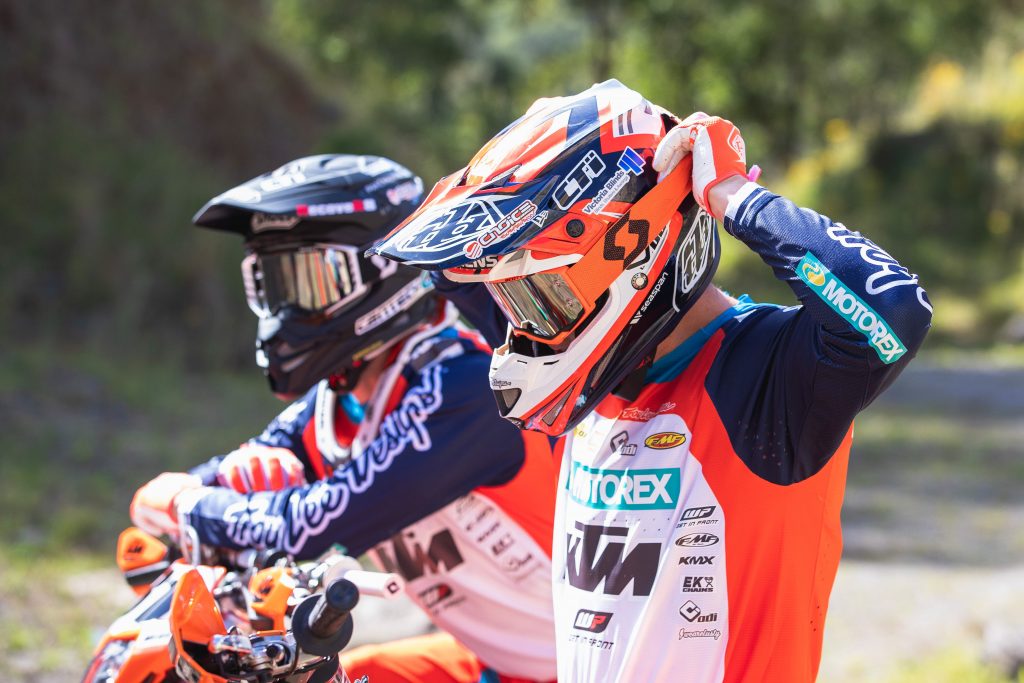 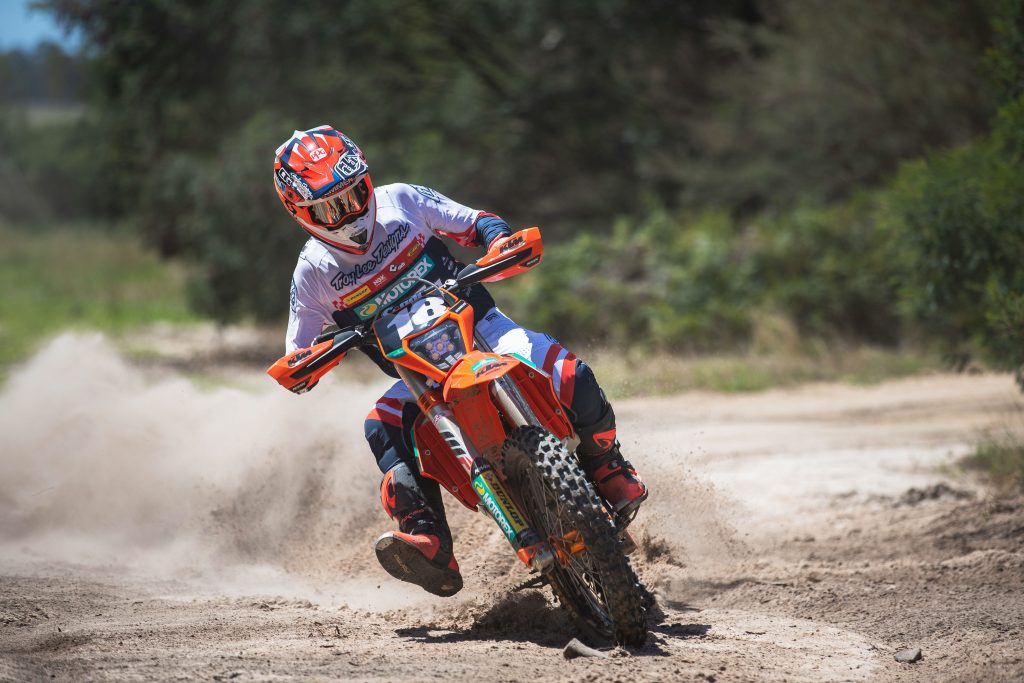 “2018 was my first year of seniors in Under 19s, but I missed that whole year pretty much. I’d been injured in New Zealand during the pre-season and missed round one, then actually raced the second round at Appin even though I only had my collarbone plated six days before that race. Unfortunately, two weeks later at Wonthaggi for round three I did my knee and missed that whole year. I was actually not having too bad of a year in 2019, on the podium at Broadford and Maitland, but then had a massive knockout at Murray Bridge. In round eight at Moree I broke my wrist, so I didn’t finish the year off again. At that point I realised I wasn’t really enjoying motocross and, yeah, wanted to go off-roads.” 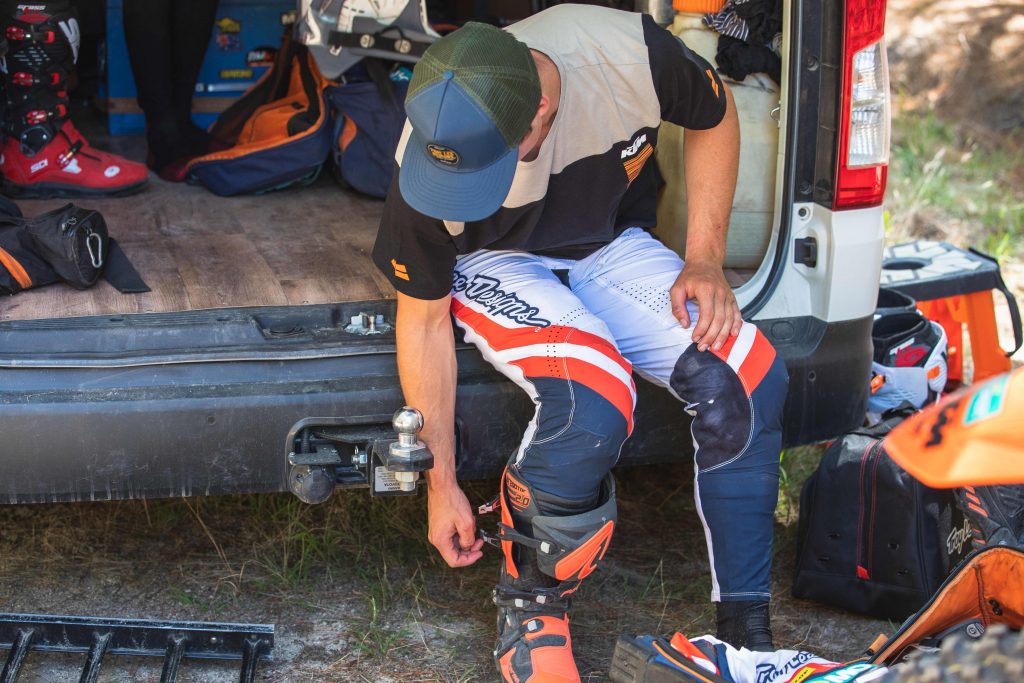 “I’ve always raced off-roads through juniors and the KTM team had been winning for most of that time. They’ve had Toby Price who has gone through there, Daniel ‘Chucky’ Sanders has been there as well and now my teammate Daniel Milner is there. They’ve always been the benchmark in the off-road racing scene, so when I transitioned to off-roads, that was one of my goals, to get on the KTM Enduro Racing Team. For it to happen straight away, to jump straight in there and be teammates with the world’s best, Daniel Milner, it’s so good hanging out with him and going racing with the boys, Mick [Carusi] and Jordy [Yeo]. Just the whole team and everyone associated are so professional, so I guess I’m lucky in a way and hopefully we can keep it going.” 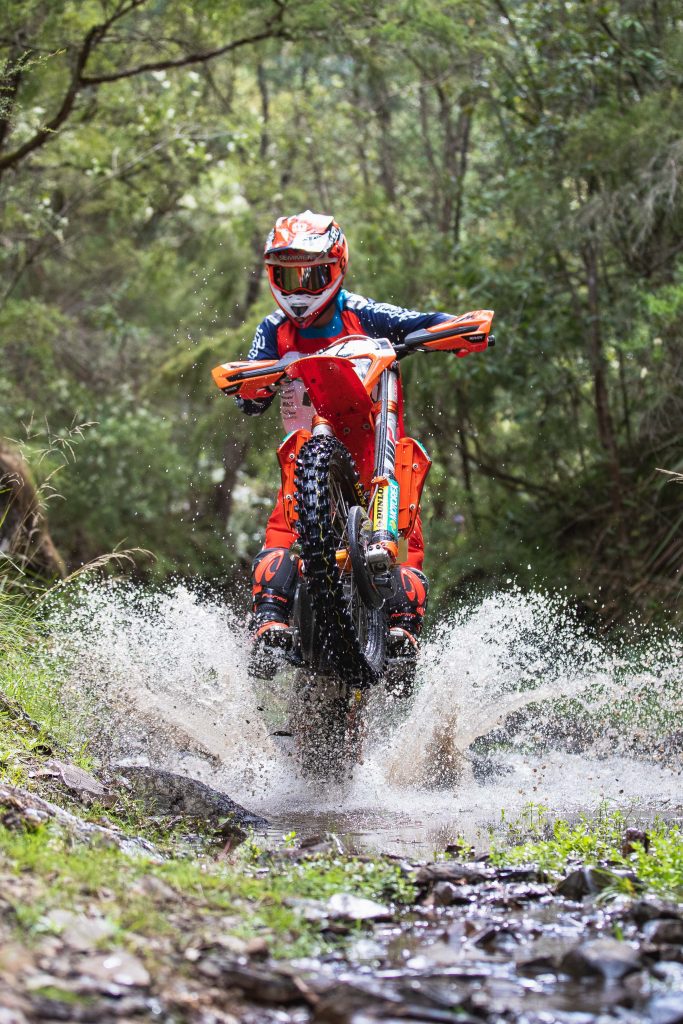 “Coming into this year, obviously going from motocross to enduro and getting straight on the KTM team, it’s a bit of a bummer that it’s come to a halt so quickly at the moment because of coronavirus. I was just loving going racing with the team and enjoying everything about it. I got the E1 class win on Sunday at Toowoomba, which I was stoked about, then finished second at Dungog with the one round that we had there, so I’m one point out of the championship lead as we stand. Before the next round, whenever it starts up, I want to be race ready and battling for race wins again – I don’t want to let this championship slip away.” 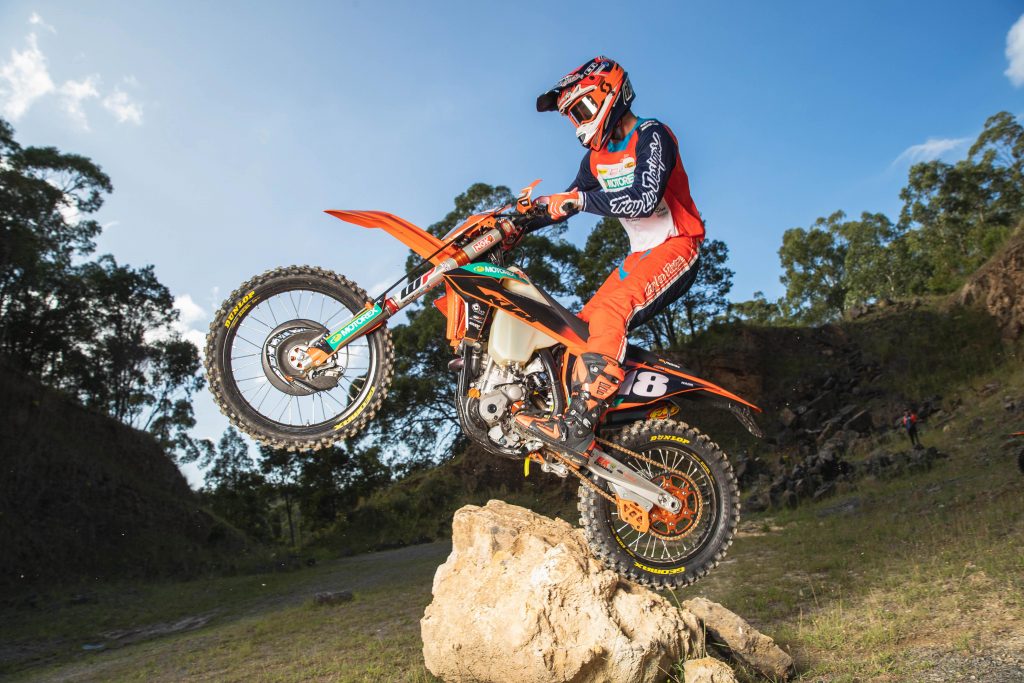 “I’ve ridden a KTM 250 SX-F since 2015, so five years now, so it’s definitely not a new bike to me, but you’ve obviously got the softer suspension settings for the tree roots and the longer ride period in the off-roads, so you don’t want harsh motocross suspension. The KTM Enduro Racing Team has definitely put a good motor underneath me, Danny Apro’s built me an amazing bike, so I just can’t wait to be able to race it again.” 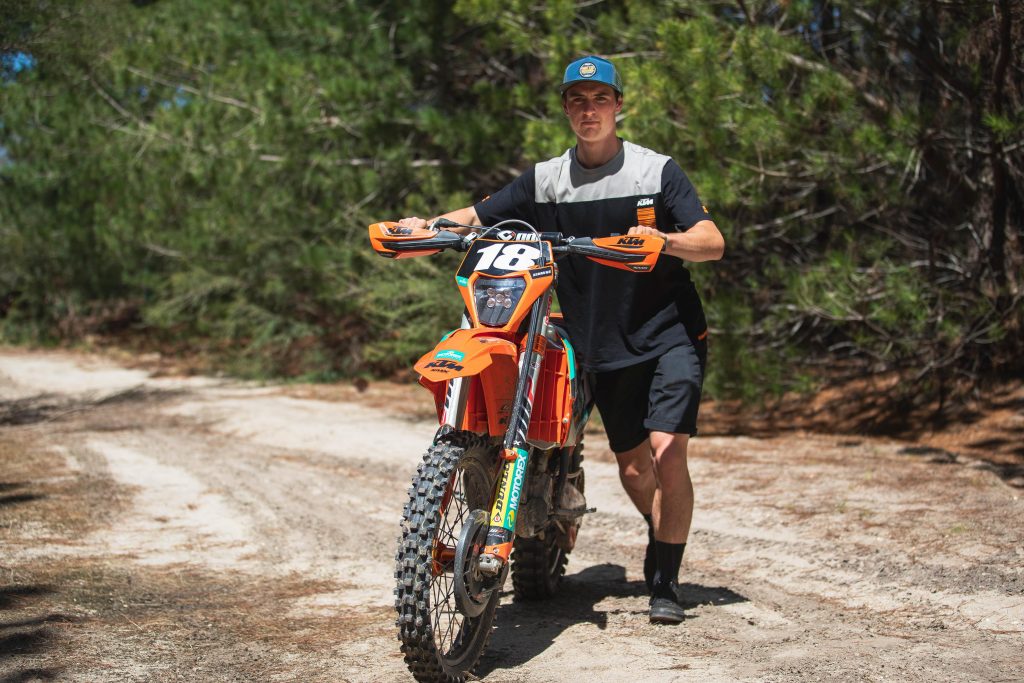 “Every round, every sprint, every race I’m going to, I’m learning something different. You’ve got to be on the ball straight away with these tracks because, for example, you go into a sprint, sprint straight away and if you don’t really remember the track – we walk the tracks twice or whatever – you can lose a lot of time. You’ve got to make sure you nail the turns, know where the hills are and all that sort of stuff. I’m still learning all of those things, but the main thing for me is that I want to get through the season healthy and gain as much experience as I can. I haven’t completed a full season for a couple of years now, so I just keep the ball rolling in the next few years while trying to win as much as possible along the way.”